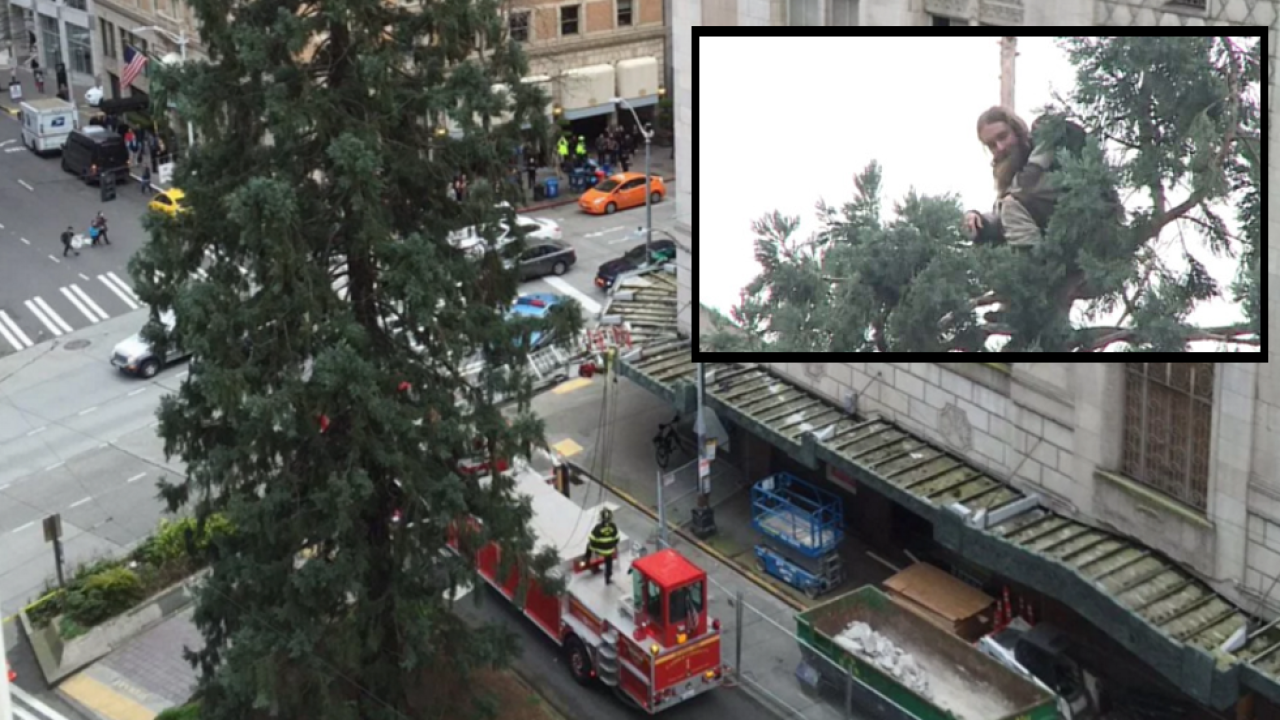 SEATTLE -- The standoff with a 28-year-old man who refused to come down from an 80-foot Sequoia tree in Seattle has officially come to an end.

After more than 24 hours, the Washington man climbed down and went to the hospital to be checked out.

After ~25 hours, #ManInTree is down safely and in police custody. We'll be getting him a medical eval shortly. pic.twitter.com/N5LJmwMtIh

However, not before throwing an apple at paramedics and making rude gestures to TV cameras.

KCPQ reported the man scaled the 80-foot tree at about 11 a.m. PDT Tuesday and was up there until Wednesday afternoon.

No one seems to know why he climbed up there -- or what he wanted, if anything.

VIDEO: Seattle #ManInTree ran out of apples, so he is throwing pine cones and branches https://t.co/KDpaGUU46o -https://t.co/wPNAjvcSlk

Stranger than Fiction: @TheronZahnKOMO interviewing a man with goat named 'Deer' across street from #ManInTree. pic.twitter.com/oWFEVabv3R

The man spent much of the morning reclining quietly in the upper branches, according to KCPQ, but he resumed gesticulating wildly and shouting when two police officers tried to talk to him from sixth-floor windows of the Macy's department store building next door.

Streets were closed in the area as officers tried to get him to come down.

UPDATE: @ThePhoenixJones here. Sandwich in hand. Police not letting him get close to the scene. #ManInTree #Q13FOX pic.twitter.com/5J4uXqFLJF

Person in tree between 3rd and 4th on Stewart. SFD supporting @SeattlePD pic.twitter.com/01FyXZxNId

These are the different groups watching #ManinTree. Some tourists on one side, people with… https://t.co/3Ub9MhBIF9 pic.twitter.com/rtK87o9fGr

"Officers arrived at the scene, determined the man posed a danger to himself, pedestrians and motorists, and closed several surrounding streets. Police attempted to contact the man but he refused to speak with officers," the Seattle Police Department said on its online crime blotter.

"During early attempts to contact the man, who appears to be suffering from a mental health crisis, he threw an apple, branches, pine cones and other items at officers on the street below, and claimed to be armed with a knife," SPD said. "Due to the his violent behavior and threats, and the man’s precarious position high above the ground, police are taking extreme caution to ensure the safety of everyone involved.

If this isn't the cover for the next @PearlJam album, I'll lose faith in humanity. #ManInTree pic.twitter.com/zr5674Aw8Q

"Once the incident is resolved, Seattle Department of Transportation officials will review the health of the approximately 80-foot sequoia tree, believed to have been in place since the 1970s," SPD said.