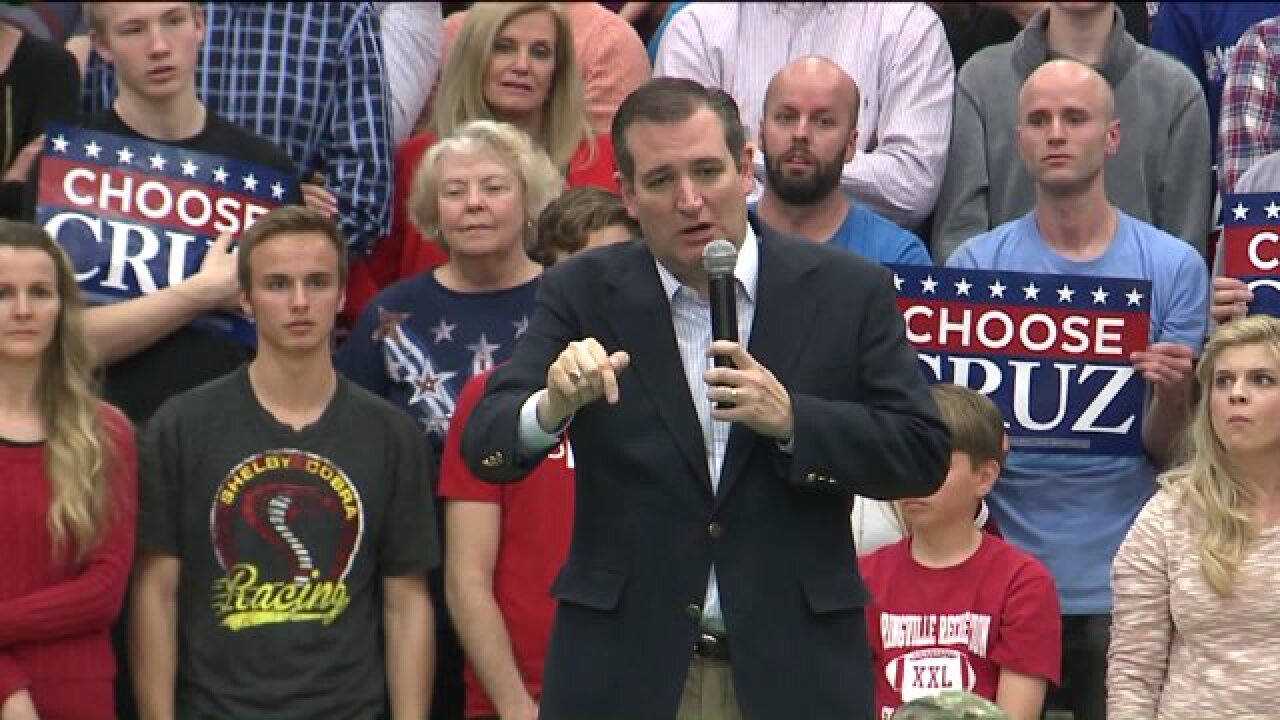 Cruz attended two events Saturday. The first one was at Sen. Mike Lee’s campaign kickoff in Draper. The event started at 10 a.m. at the American Preparatory Academy.

Thousands of supporters turned out, with many not making it inside. Fiorina spoke first, saying, “We need a real conservative in the White House,” and that the federal government is incompetent and corrupt.

She talked about the Constitution, and how Capitol Hill and the Oval Office need “fearless fighters.” She made a plug for Sen. Mike Lee in that message.

Perhaps the loudest cheers yet came when Glenn Beck approached the stage. He spent a lot of time talking about religion.

“I didn’t want to be a Mormon,” he joked when telling the story of his conversion in 2000.

But he said, “I believe the Book of Mormon. I believe it to be true. Every word of it.”

In the end, he said Cruz would protect and defend the Constitution.

Senator Mike Lee spoke next, asking rhetorically if Utah could tip the balance to let Cruz become the next president, to which the crowd broke out in cheers.

The ralliers went wild when Cruz made his appearance.

“I’m here today because our country is in crisis,” he said, before launching into the meat of his speech.

Cruz made clear the three points he wanted to touch on: jobs, freedom and security.

He mentioned how the heart of the economy is in small business.

If elected, Cruz said, he would repeal every word of Obamacare. He mentioned wanting to pass a simple flat tax and abolish the IRS.

“We will see small businesses take off, millions of high paying jobs, it will generate trillions in government revenue,” he said. “We will use that revenue to rebuild this military.”

He said he would not compromise away religious freedoms and Second Amendment rights.

But there was also a fourth theme Cruz spent time talking about: Donald Trump.

Cruz said there is, “only one campaign that has any path to beating Donald Trump.”

If Trump takes the GOP nomination and heads to the general election, Cruz said Trump would lose to Hillary Clinton, should Clinton take the democratic nomination.

He said Republicans need to unite behind his campaign.

When it came to talking about Mitt Romney’s announcement that he was going to vote for Cruz at the Caucus, Cruz explained that Romney said, “If you want to stop Donald Trump, stand and vote with Ted Cruz.”

Cruz concluded by saying he will fight for liberty, the Constitution and the Judeo-Christian values that built this nation.

Sanders is expected to hold another event in Utah Monday.

Information for Democratic caucuses can be found here.

Information for GOP caucuses can be found here.