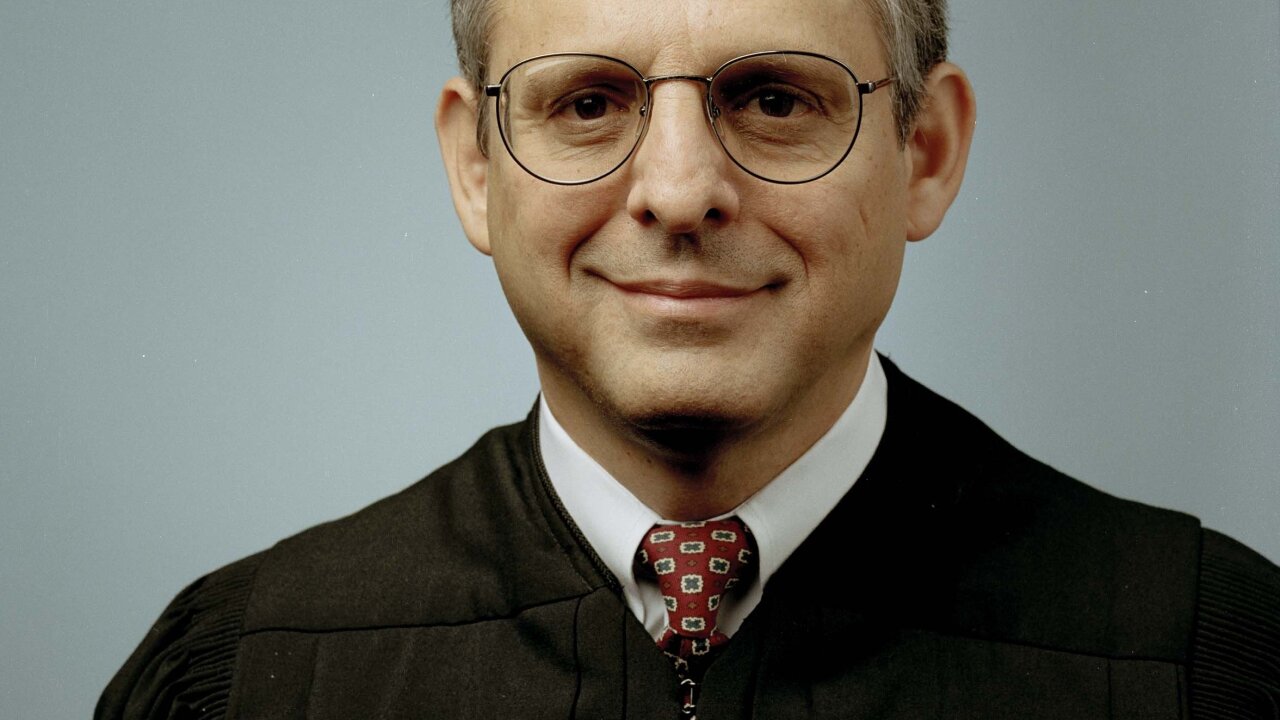 Merrick Garland, a judge on the U.S. Court of Appeals for the District of Columbia, has been considered in the past for a seat on the U.S. Supreme Court.

[Editor’s Note: Scroll to the bottom of this article for reactions from U.S. Senators Orrin Hatch and Mike Lee.]

WASHINGTON (CNN) — President Barack Obama nominated Merrick Garland to the Supreme Court Wednesday morning, setting up a dramatic political fight with Senate Republicans who have vowed to block any replacement for the late Justice Antonin Scalia.

In a speech in the White House Rose Garden, Obama praised Garland as “one of America sharpest legal minds.”

“I have selected a nominee who is widely recognized not only as one of America’s sharpest legal minds, but someone who brings to his work a spirit of decency modesty, integrity, evenhandedness and excellence. These qualities and his long commitment to public service have earned him the respect and admiration from leaders from both sides of the aisle.”

Senate Republicans do not plan to vet or have hearings on Garland, and say the next president should be able to choose Scalia’s replacement. Obama and Democrats argue that with 10 months left in his term, there is plenty of time for the Senate to take up and confirm a new justice.

Garland, 63, the chief judge for the U.S. Court of Appeals for the District of Columbia Circuit, has been on short lists before. An appointee of President Bill Clinton, Garland is a graduate of Harvard and Harvard Law School. As a Justice Department lawyer, he supervised investigations in the Unabomber case as well as the Oklahoma City bombing.

Garland called Obama’s decision to nominate him “the greatest honor of my life.”

“For me, their could be no higher public service than serving as a member of the Supreme Court,” Garland said.

Obama’s announcement amplifies the ongoing political battle over the precedent and propriety of considering a Supreme Court nomination amid a heated presidential election.

The announcement comes after a big night in the 2016 election, with both party’s front-runners — Democrat Hillary Clinton and Republican Donald Trump — emerging with sweeping victories as they march toward their respective nominations. Some believed Obama would time his pick so it wouldn’t get lost in a news cycle dominated by election results. But the timing seems suited to directly insert the selection into the political conversation.

Fueling the argument is the potential for the first shift in the court’s ideological leaning in two decades. If confirmed, Obama’s nominee will likely offer a vastly different legal outlook that Scalia, who was considered one of the court’s most conservative members.

At 63, Garland is much older than the other contenders on the short list such as Judges Sri Srinivasan, Paul Watford and Jane Kelly. Garland’s supporters argue he is the nominee that the senators couldn’t refuse even in a contentious environment.

Obama has said his goal was to find a “consensus candidate.”

“It is my intention to nominate somebody who has impeccable credentials, somebody who should be a consensus candidate,” Obama told CNN en Español anchor Juan Carlos Lopez in an interview last week.

This is Obama’s third nomination to the high court. Sonia Sotomayor and Elena Kagan were confirmed in 2009 and 2010, respectively. But those confirmation hearings and votes occurred when Democrats were firmly in control of the Senate.

All eyes on Senate Republicans

Since Scalia’s death and for the foreseeable future, the court has operated with eight justices, four appointed by Democrats and four by Republicans.

Senate Majority Leader Mitch McConnell and the GOP chairman of the Senate Judiciary Committee, Charles Grassley of Iowa, have both expressed little leeway in their determination to forgo hearings for Obama’s nominee.

“We think the people should choose as we’ve said repeatedly,” McConnell said Wednesday morning after word of Garland’s selection was made public.

There have been dissenters on the Republican side, particularly from moderate Republicans. But their ability to force hearings before the full judiciary panel appear slim.

CNN senior legal analyst Jeffrey Toobin said it will be difficult for them to change tactics now.

“I don’t see how at this point they can go back on this promise,” not to move on the nominee, Toobin said Wednesday morning.

A McConnell aide said noted the Kentucky senator voted against Garland when he was confirmed to the appeals court in 1997 and argued Obama’s choice is a recognition that this pick not getting through — otherwise the President would have picked a younger nominee who would serve longer.

Sen. Pat Roberts, one of seven current Republicans to vote for Garland in 1997, told CNN he will not back the judge now.

“It’s not about the person. It’s about the process. Let the people decide,” Roberts said.

Asked why he voted for Garland previously, Roberts replied, “I supported him.”

Democrats, meanwhile, have already begun a campaign to pressure Republicans into considering Obama’s nomination. In their sights: vulnerable senators up for reelection, some of whom are already facing backlash from opponents for refusing to consider even a hypothetical Obama nominee.

“It isn’t any different if the President of the United States notifies Congress well in advance of a piece of legislation that he’s going to veto it,” Grassley said at a Judiciary panel hearing, citing criticism from Republicans over the role of the high court.

“Whether it’s today or tomorrow or whether it’s for the next seven or eight months, this is a very important debate that we ought to have about the Constitution and about not only who’s going to be a replacement for Justice Scalia but about the role of the Supreme Court,” he added. “At the grassroots of America, there’s a real feeling of ‘Is the Supreme Court doing what the Constitution requires?'”

Trump said he agrees with the stance of the Hill Republicans. “I think the next president should make the pick. And I think they shouldn’t go forward. And I believe I’m pretty much in line with what the Republicans are saying,” Trump told CNN’s Chris Cuomo Wednesday on “New Day.”

The announcement comes 32 days after Scalia’s death, only slightly longer than it took him to name his two previous appointments to the high court. Unlike his nominations of Sotomayor and Kagan, the vacancy this time wasn’t expected. White House officials have said they weren’t anticipating another Supreme Court nomination during Obama’s term ahead of Scalia’s death.

Obama oversaw a team led by his counsel Neil Eggleston, chief of staff Denis McDonough, and his senior adviser Brian Deese to select and vet a group of potential nominees. After conducting interviews last week, Obama narrowed his list to include Merrick, Watford and Srinivasan, each of them considered “consensus” candidates for their history in gaining confirmation support from Republicans.

Any replacement of Scalia has the power to tilt the ideological balance of the court for decades, something conservatives are using to move their base to hold the line.

“This seat could be transformational to the court because Justice Scalia’s fidelity to the Constitution was a real anchor for the court. If he were replaced by an Obama nominee that would give the court a solid five votes for enacting an extremely liberal agenda that the American people will not be comfortable with,” Carrie Severino, of Judicial Crisis Network , a conservative group opposed to any candidate getting a hearing until after the election. It would shift the court –that is somewhat balanced –to a liberal stronghold. She is a former clerk of Justice Clarence Thomas.

Since Scalia’s death, justices have been considering several major cases, including a challenge to public sector unions, a race-conscious admissions plan at the University of Texas, the first big abortion case since 2007, challenges to voting rights, the Affordable Care Act’s contraceptive mandate and a challenge to Obama’s executive actions on immigration. Scalia’s death means not only the loss of the court’s main conservative voice but also increases the likelihood of a 4-4 split on controversial issues. If the court is equally divided in a case, ruling 4-4, it means the lower court opinion stands and there is no precedent set by the Supreme Court.

“I think highly of Judge Garland. But his nomination doesn’t in any way change current circumstances. I remain convinced that the best way for the Senate to do its job is to conduct the confirmation process after this toxic presidential election season is over. Doing so is the only way to ensure fairness to a nominee and preserve the integrity of the Supreme Court.”

In light of the contentious presidential election already well underway, my colleagues and I on the Judiciary Committee have already given our advice and consent on this issue: we will not have any hearings or votes on President Obama’s pick.

Any meeting with any nominee put forward by President Obama would only be a waste of the Senate’s time. The Court has very ably dealt with temporary absences in the past and will do so again now.”