Utah woman who rescued dog after fall through ice: ‘I have no idea how I had the strength’ 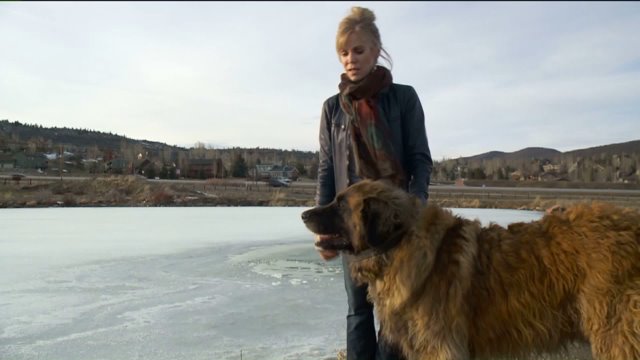 PARK CITY, Utah -- A walk with the dog quickly turned into trouble at a pond in Park City. Nanci Done-Nemeth says no one was around when she and her dog crashed through the frozen pond into the icy waters Thursday afternoon.

“It could have been extremely disastrous,” Done-Nemeth said.

A hole in the frozen pond and paw prints on the ice tell the story of a terrifying situation.

“There was no time for thinking,” Done-Nemeth recalls.

Nanci was out for a walk with her dog Reggie. As they headed toward the car, Reggie lingered behind.

“The next thing I knew I turned around and he was several feet away,” she said.

Reggie ran onto the frozen pond, and Naci watched in horror as he went through the ice.

Without a moment’s hesitation, Nanci rushed onto the ice.

Nanci had watched a fire crew rescue a pet from the ice earlier in the year, so she did what they did: she shimmied on her stomach out to Reggie and reached for him.

“I grabbed under his collar and I grabbed all the fur I could with my hands, I felt my finger nails bending back,” Done-Nemeth said.

Reggie is a full-grown leonberger weighing 165 pounds. As Nancy struggled to pull him out, his weight pulled her down. That’s when the ice beneath Nanci broke. With half of her body submerged in the icy water, still she fought.

“The fear in his eyes was all the drive I needed,” Done-Nemeth said.

Miraculously, Nanci pulled her massive, soaking wet dog out of the water.

“I have no idea what happened after that point other than I was able to get myself back out still holding onto him and just yanked with every fiber of my being,” she said.

Reggie landed on top of her then he jumped up and pulled them both across the ice and back to shore. Nanci still had a death grip on his collar.

“I understand now when moms can lift cars off their children,” she said.

Nanci is grateful she and Reggie are alive to tell the tale.

“I was in such shock that I was able to lift the dog out, so there was a lot of prayer right at that moment, just I had no idea how it happened," she said. "I have no idea how I had the strength."

Nanci and her husband, Fox 13 News' Dave Nemeth, hope others can learn from her mistakes. She didn’t tell anyone where she was, she was by herself, and she was by an icy pond.