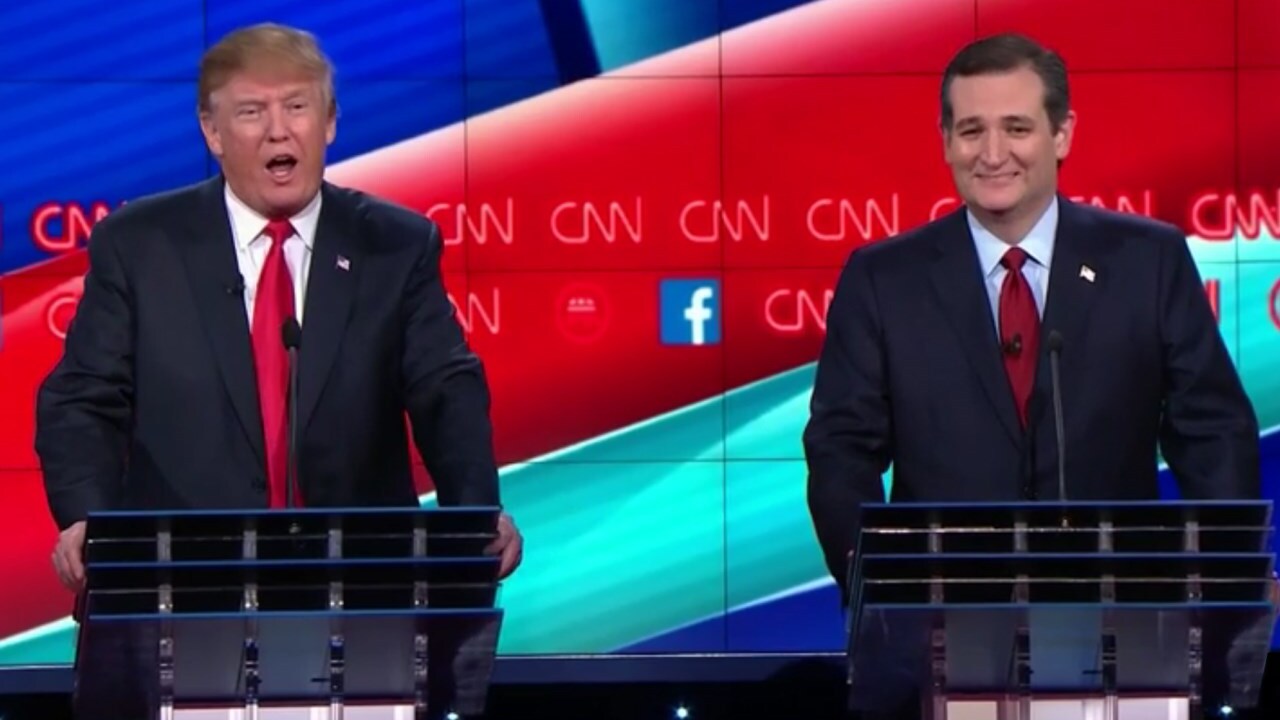 File: Donald Trump and Ted Cruz at a debate.

WASHINGTON (CNN) — In the bowels of the Capitol and over meals with high-powered donors, Republican Party elders are begrudgingly coming to grips with what once was unthinkable: Choosing between Ted Cruz or Donald Trump as their party’s nominee.

With the two remaining establishment favorites Florida Sen. Marco Rubio and Ohio Gov. John Kasich needing to both win their home states in order to survive and factor in a contested convention, Cruz and Trump could soon be the only choices left in the bitter GOP battle.

Two dominant lines of thinking are emerging, according to a wide range of interviews with more than a dozen senior party leaders.

On one side: The likes of Sen. Lindsey Graham, a former presidential candidate is now leading the pro-Cruz charge, arguing that having a life-long Republican with extreme message discipline at the top of the ticket will be less harmful than the highly unpredictable and brash Trump. That feeling persists even if Cruz is hated by many his fellow GOP senators.

Yet for all the worries about Trump bringing down the GOP or losing a general election, a surprisingly large number of Republican senators are open to backing Trump. The billionaire businessman would dramatically boost turnout and help Republicans down-ballot, they say, pointing in particular to incumbent senators’ resounding primary victories in Alabama and Arkansas earlier this month.

“I have no problem running with him,” Sen. Richard Burr, who is up for reelection in North Carolina, said of Trump.

During closed-door GOP Conference lunches, Senate Majority Leader Mitch McConnell has made clear that his sole focus is keeping the majority, pointing to 1996, when Republicans gained two Senate seats despite Bob Dole’s big loss to Bill Clinton, according to several senators. McConnell has made a similar case during meetings with donors, according to attendees.

But when the discussion turns to the Trump vs. Cruz issue, there’s no clear consensus on who would be best for their party.

“There’s a lot of confusion,” said one senior senator, who asked for anonymity to discuss private deliberations.

From their point-of-view, it’s not an easy choice: A divisive billionaire with inflammatory rhetoric or an ideologically rigid bomb-thrower who has labeled most of them as patently corrupt — all in an election year when every House seat is in contention and Republicans are in serious risk of losing their 54-46 Senate majority.

A large number of senators say having Cruz at the top of the ticket would actually be beneficial for this reason: If he lost a general election, it would send a clear message to the GOP’s increasingly powerful tea party wing that ideological purity doesn’t sell to mainstream voters in swing states, effectively giving new power to more moderate voices in the party.

But many are equally worried about Trump’s divisive rhetoric that could turn off key voting blocs like Hispanics and suburban women, believing that would do lasting harm to the Republican Party.

Asked if he was worried about Trump or Cruz at the top of the ticket, Arizona Sen. Jeff Flake, who has endorsed Rubio, answered succinctly. “Yeah,” he said.

“I think it would be a disaster for us,” Flake said of Trump, warning Democrats would have a chance of winning his red state and bringing out droves of Latino voters with Trump as the nominee. On Cruz, he added: “I’m concerned that we need to expand the Republican Party,” suggesting that the staunchly conservative Cruz wouldn’t be able to do so.

The case for Trump

With Republican turnout growing this year in primary and caucus states, some GOP senators believe that Trump’s ability to woo disaffected Democrats and independents would help bring new voters to the polls that would ultimately help their party down the ticket.

Trump has made that point himself.

Two recent examples support this argument. In Alabama this month, long-time Sen. Richard Shelby romped to a 37-point victory in his primary, even though some Republicans in Washington were fretting that the veteran senator would be caught by a tea party uprising.

Similarly, Sen. John Boozman of Arkansas was the beneficiary of an influx of new voters in the GOP primary, far outpacing Democrats, something that surprised him because of Hillary Clinton’s long-standing ties to his state.

“I think one thing we are seeing in many states is a lot more voter turnout,” Boozman said Wednesday. “We had about twice as many people choosing Republicans versus the Democratic primary.”

“There are folks who have said you’d lose the Senate if Trump were the nominee,” said Oklahoma Sen. James Lankford, who is neutral in the primary. “Well? Sen. Shelby in Alabama just won overwhelmingly, where Trump won overwhelmingly.”

Moreover, Trump is a newcomer to the GOP — and doesn’t have the bitter relationship that Cruz has with most his colleagues. And many aren’t willing yet to warm up to their adversarial colleague.

Despite Cruz’s bitter relationships, stemming from two years of acrimonious fighting over tactics and strategy with McConnell and other GOP leaders, a number of Republican senators say they’d rather see Cruz than Trump, even if they don’t think he has much of a chance of winning.

Having a conservative atop the party, they argue, would not do nearly as much harm as nominating Trump, whose policy positions are unclear and has held some views that conflict with bedrock Republican principles.

“At the end of the day, it’s time to support the nominee,” said Nevada Sen. Dean Heller, a Rubio backer. “I’m certainly hoping this is somebody other than Trump at this point.”

Graham said he prefers Kasich or Rubio but would choose Cruz over Trump, whom he views as an “interloper” to the GOP.

“Donald Trump was able to impress David Duke to the point where David Duke said, ‘I could support that guy,'” Graham said of the former KKK grand wizard. “I think it’s a huge mistake for Republicans to nominate someone who could impress David Duke because if you can do that, you’re not going to grow this party. ”

Yet, Graham flatly acknowledged the challenges Cruz has in winning over Senate Republicans, whom the Texas Republican has dubbed as part of the “Washington cartel” and regularly attacks on the campaign trail.