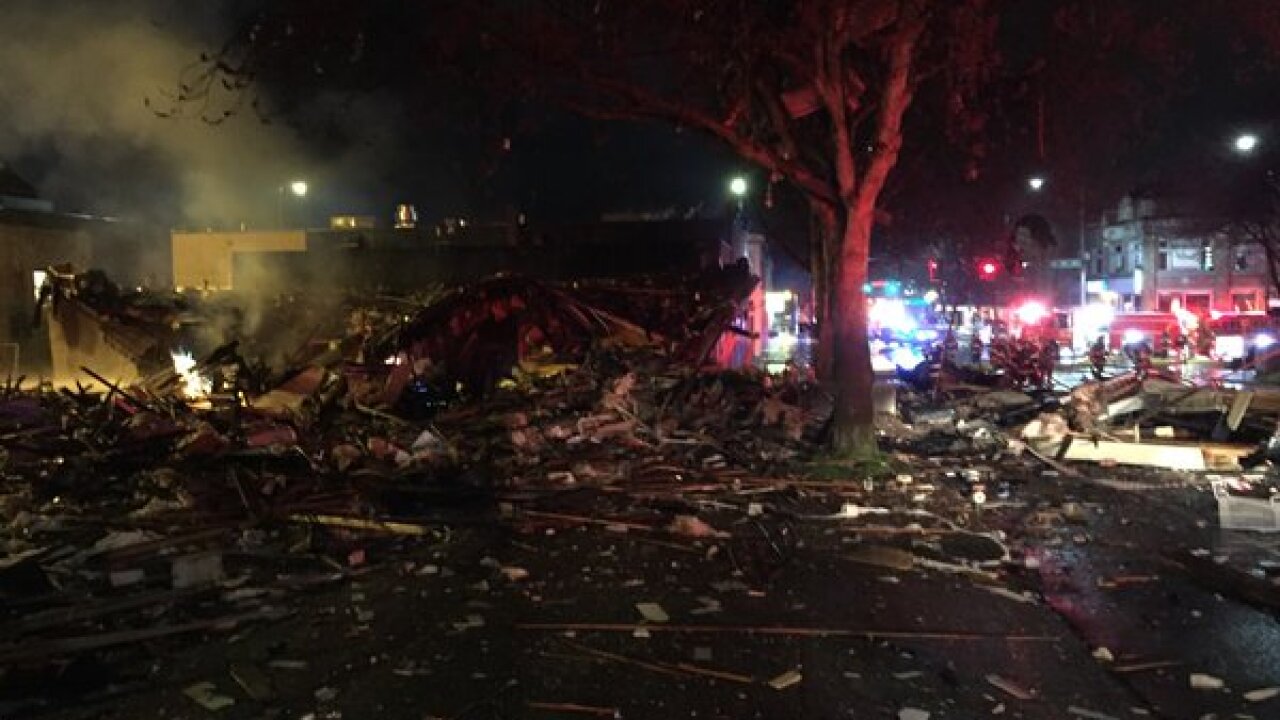 (CNN) — A massive explosion ripped through a Seattle neighborhood early Wednesday — obliterating at least one building, damaging many others and sending nine firefighters who’d been investigating a gas leak to a hospital.

One battalion chief and eight firefighters were transported to Harborview Medical Center for possible minor injuries, said Seattle fire spokeswoman Corey Orvold. These eight men and one woman had all been released as of 8 a.m. (11 a.m. ET), according to the hospital. Their injuries ranged from cuts to abrasions.

While they recovered, their colleagues — at least 67 personnel including firefighters, commanders and medics — remained in the commercial part of the city’s Greenwood neighborhood to address lingering flames and smoke.

Crews from Puget Sound Energy were also on site to stop the gas flowing there, drilling holes into the pavement to access cutoff valves.

“We haven’t been able to go through the rubble right now,” fire Chief Harold Scoggins told reporters around 6 a.m.. “You can see our firefighters are still putting water on the fire, the gas is still leaking as we speak.”

Members of Scoggins’ department first rushed to the scene about five hours earlier, after getting a call about a gas leak in Greenwood.

They were there, trying to “detect and determine where that gas was coming from,” when the explosion occurred shortly before 1:45 a.m.

“We know, as firefighters, that this is a very dangerous job, and these things can happen from time to time,” Scoggins said. “… They did all the things they needed to do to take care of business.”

The blast destroyed at least one building that included a restaurant and shattered windows as far as two blocks away.

Its destructive force was evident in images tweeted by the fire department showing debris stuck in trees and littering the street, as well as the shattered windows of nearby storefronts and restaurants.

Witness: ‘Debris just coming down from the sky’

Authorities haven’t indicated if any people were in the buildings hit hardest by the blast, with Orvold indicating one or more dogs were on-site to help canvass the rubble. But that hadn’t happened yet as of 6 a.m., when gas was still leaking there.

There was no immediate indication that any civilians nearby had been injured.

They were rattled, though, with witnesses telling CNN affiliate KCPQ about bars in the vicinity shaking, damaged cars and shattered glass most everywhere in sight.

“The whole building, it just exploded,” said Bryan Howard, a KCPQ photojournalist who’d arrived on the scene a minute or so earlier. “I took off running but when I turned back around, there was debris just coming down from the sky… I remember … a giant fireball going up into the air.”

Public buses shuttled people from multiple buildings, at least one of which included apartments, which were evacuated in the aftermath of the explosion, Orvold said. In the meantime, investigators converged on the site to determine what exactly caused it.

Just over six months ago, a gas leak caused a blast that injured one and brought down part of a Motel 6 in Bremerton, Washington, just across Puget Sound from Wednesday morning’s blast.

CNN’s AnneClaire Stapleton and Jackie Castillo contributed to this report.

Explosion in Greenwood between 84th and 85th. pic.twitter.com/HiV18323ps