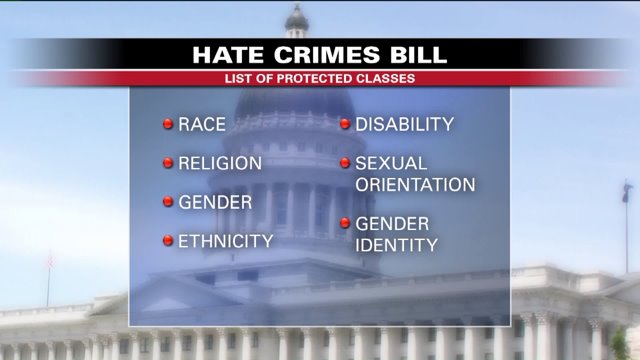 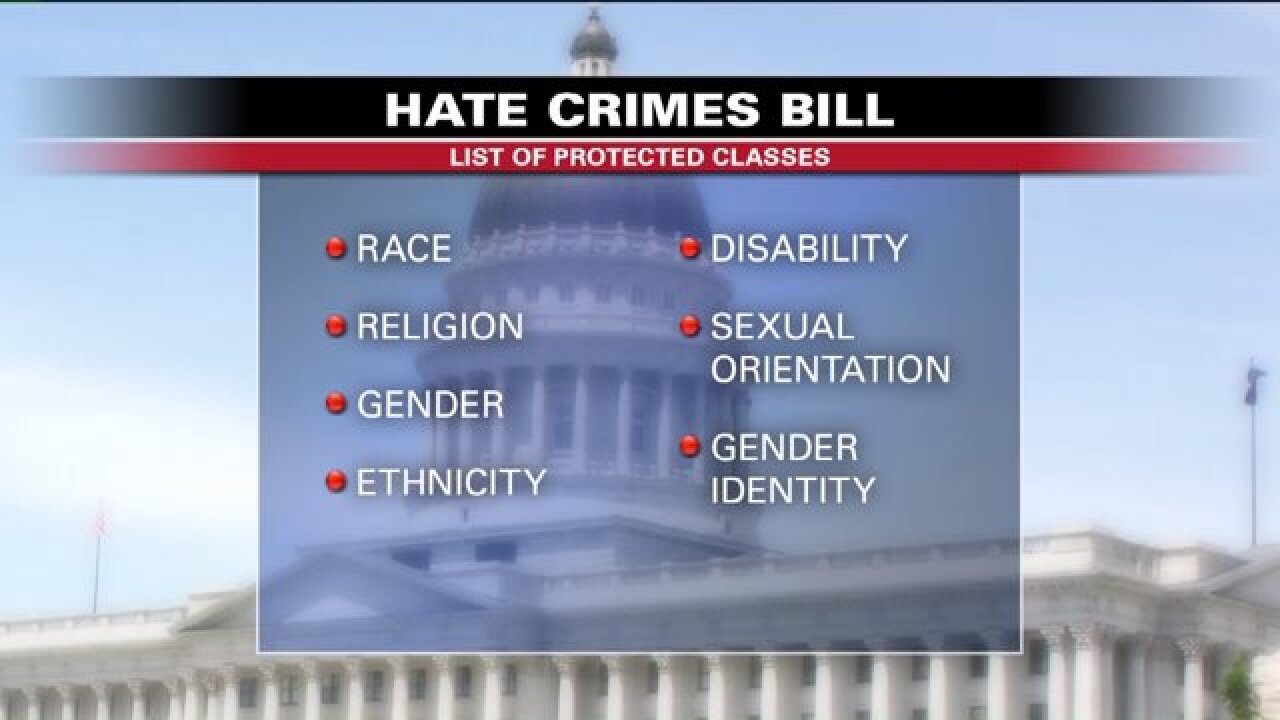 SALT LAKE CITY -- A controversial bill that would have added protected groups to Utah's hate crimes law was defeated in a Senate vote, and supporters accused the Mormon church of killing it.

After passionate debate on Wednesday, Senate Bill 107 died in a 17-11 vote.

"We made a good run at it. Didn't get it," Sen. Steve Urquhart, R-St. George, told reporters after his bill was defeated.

SB107 would have added race, religion, ethnicity, gender, disability, sexual orientation and gender identity to the list of protected classes. But it faced strong pushback on the Senate floor.

"Is there any data showing there's less crimes committed because of the hate crimes law? The answer is no," Sen. Todd Weiler, R-Woods Cross, said.

"I don't see white, Caucasian male," he said. "You know what I mean, this gets to a point where it's ridiculous!"

Other lawmakers argued the bill was creating "thought crimes."

"Please stop saying this is about thought," Sen. Daniel Thatcher, R-West Valley City, countered. "This is about crime."

Sen. Urquhart had two men who were the victims of an anti-gay hate crime with him on the Senate floor as his bill was debated. Sen. Jim Dabakis, D-Salt Lake City, pointed to them and said "it is not thought control for these two young men who had the crap beat out of them!"

Sen. Urquhart accused The Church of Jesus Christ of Latter-day Saints -- a powerful influence on Utah's Capitol Hill -- of "snuffing out" his bill. In response to questions from reporters, the LDS Church expressed concerns that SB107 would upset a balance struck between LGBT rights and religious liberties in nondiscrimination legislation last year.

"I felt that we were going to pass hate crimes through the process and after their statement? There was really no way to pass it," he said.

Sen. Urquhart told FOX 13 he met with LDS Church representatives on Wednesday before the vote.

"I expressed my concern that I don't think any one group gets to be the arbiter on the future progress on LGBT issues," he said.

Troy Williams, the executive director of the LGBT rights group Equality Utah, conceded the LDS Church's statement on the bill affected its odds of passage.

"The church's statement did have a big impact on how our legislators voted," he said. "That's undeniable."

A spokesman for the LDS Church did not immediately offer any comment.

Hate crimes legislation may return next year. Sen. Thatcher told FOX 13 he would bring the bill back.