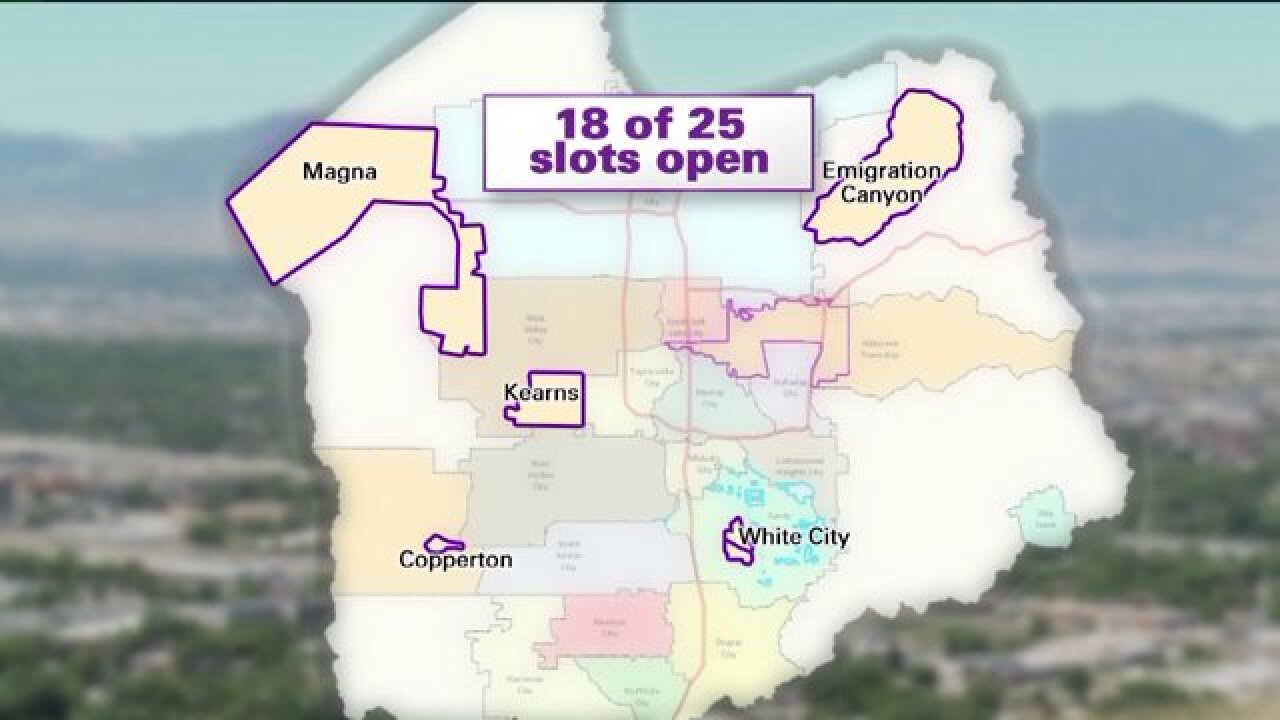 SALT LAKE COUNTY, Utah -- A problem seems to be arising in some areas of Salt Lake County’s newest townships: No one is running for office.

Now, Salt Lake County committees are trying to find people who will run townships like Magna, Kearns and Copperton.

When the gate opened in January for candidates to run for the five township councils, barely anyone rushed in to volunteer.

He said he put his hat in the ring after noticing only one candidate signed up for Magna’s five open council seats in its five districts. That person was Dan Peay.

“Somebody has to get involved,” he said with a laugh, when asked why he was so gung-ho to run for a council position.

They both said they’ve spent quite a bit of time actively recruiting to fill the roster.

“I have been pushing for months, trying to get people interested in running,” Elieson said.

“A few of us went out and tried to contact people and get them involved,” Peay said.

According to the Salt Lake County Clerk candidate filings list, 18 of the 25 council slots don’t have any candidates between the five metro townships.

Each township is broken up into five districts. A person must run for the district in which they live.

So far, no one is running for any of the five district council seats in Kearns, White City and Copperton.

Two Emigration Canyon Council seats have yet to see candidate filings, with two having filed for District 4 and one each for Districts 1 and 2.

While District 5 in Magna remains wide open with no candidates, others beside Elieson and Peay stepped forward in the last week to file for candidacy.

“Obviously we get concerned when we don't see as much involvement,” said Salt Lake County Council Member Aimee Winder Newton.

With the filing deadline weeks away, why aren’t more people stepping up?

Winder Newton said it could be attributed to a couple of reasons.

One obvious part of it, she said, could come down to people waiting until the last minute to see who else has filed first before they submit their paperwork.

Another reason could be confusion over what these council members will actually do, and a resulting hesitation to volunteer to jump in.

“I think one of the issues there is that they may not understand what this new form of government is,” she said.

She explained that this council, though not a full-on city council, still has a lot of authority.

The five-member entity in each township will write and enforce city ordinances and laws.

“This really is an incorporated entity that makes big decisions for the community, so we hope that we’ll see some of these leaders emerge,” Winder Newton said. “We know they're out there, we just need to help encourage them to apply.”

She said the county will make a big push to educate and recruit candidates, and they even plan to host a training on how to run for office.

Winder Newton explained that anyone who runs will have a lot of help from Salt Lake County as they transition into office. There’s even advisory boards set up in each township to assist the first-time council members.

If there are still open candidate seats, Winder Newton wouldn’t say what could happen, but added that they hope it doesn’t come down to that.

The election could get some help from a legislative bill, however. House Bill 320 would do away with council representation from each of the five districts for townships with less than 10,000 people, and instead allow “at-large” council members.

Those members would still have to live within the townships, but they wouldn’t be restricted to living within the specific districts they represent.

The townships that would be affected by H.B. 320 would include Copperton, White City and Emigration Canyon.

It recently passed the House by a near-unanimous vote and is currently making its way through the senate.

The filing deadline for candidates is March 17.