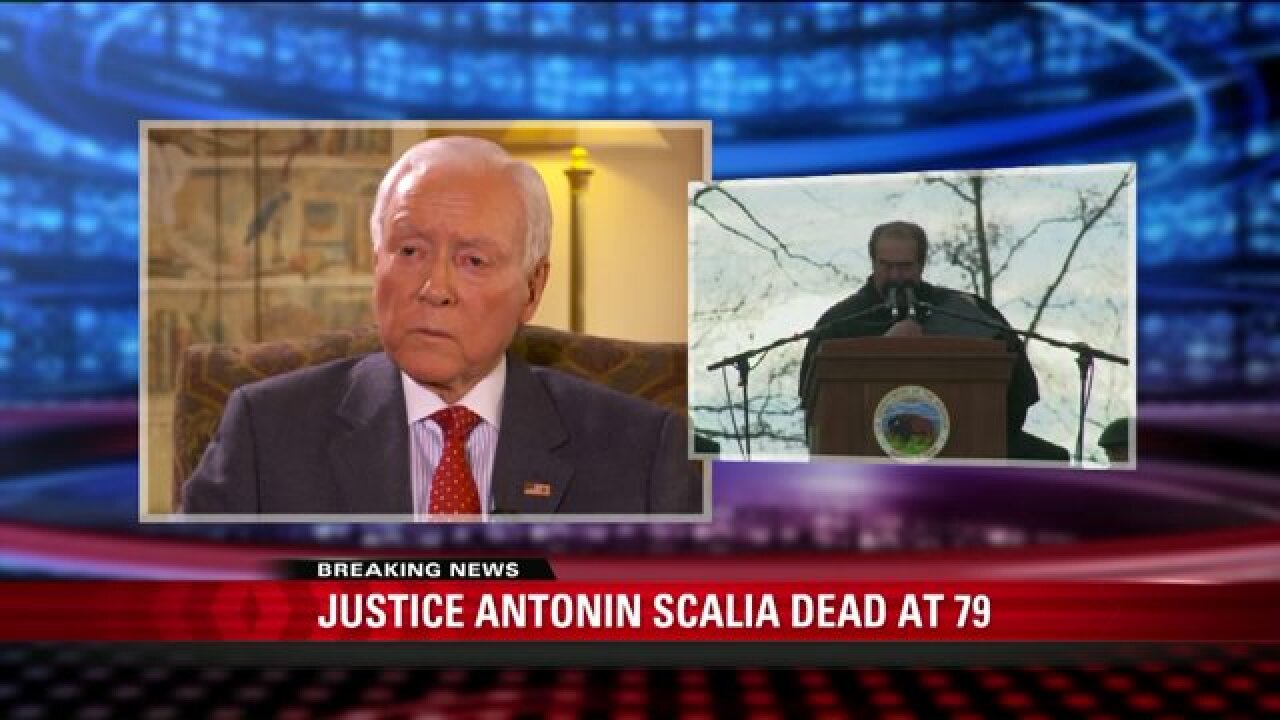 SALT LAKE CITY -- Senator Orrin Hatch, who serves on the Senate Judiciary Committee, spoke Saturday after the death of Associate Justice Antonin Scalia and said he believes if President Barack Obama tries to appoint a "left-wing" replacement, that person will not be confirmed.

Hatch spoke to the media Saturday afternoon, saying he feels a personal loss after Scalia's death.

“That’s a tragic loss for the country, he was clearly one of the most brilliant Supreme Court justices in history, plus a terrific human being, and I feel a personal loss as well," Hatch said. "He was one of the people I was very close too."

Several conservative politicians have already said they believe the decision regarding a replacement should be delayed until the outcome of the 2016 presidential race is decided.

“I think Majority Leader McConnell has said this should be delayed until the next presidency," Hatch said. "I kind of agree with that, because it’s clearly part of the politics of the presidential race right now, and I don’t want to see it be a political hoopla, or a political mess, which it could become."

Hatch said if President Obama attempts to appoint a "left-wing" justice, that process would get messy. Saturday night, the president said he intended to nominate a replacement.

“This would be a real mess if the president decides to go ahead and appoint some very left-wing person to the court," Hatch said. "I can tell you this, I don’t think that person is going to make it through. And it’s very likely that, because it is so political, that even both sides will agree that probably the best thing to do is wait until the next election, and whoever wins is going to have that privilege of selecting Justice Scalia’s replacement.”

Hatch said President Obama's administration has appointed the "most liberal" justices in history, which he said is cause for concern among Republicans.

When asked if it was fair to make the nation wait until the election for a replacement on the court, Hatch said the court would function well enough with eight members.

“Well the court will survive, and the court will issue its opinions," Hatch said. "Naturally, both sides are worried that a 4-4 opinion means an upholding of the circuit court of appeals decision that occurred down below, so naturally there are concerns on both sides. But, on the other hand, the court has always been able to operate even with a smaller constituency."

“Like so many others, I am saddened to learn of the sudden passing of Justice Antonin Scalia. A true legal giant, he will be remembered as an unwavering defender of the Constitution with strong resolve and exceptional intellect. As one of the longest serving justices on our nation’s highest court, his impact on this country will not be forgotten. Jeanette and I extend our heartfelt condolences to his family and offer prayers on their behalf at this difficult time.”

Senator Mike Lee said in a statement that Scalia was one of the greatest judges to ever sit on the Supreme Court:

"Our deepest condolences to the Scalia family.  The Justice and his family are in our prayers. Justice Scalia was one of the greatest Supreme Court justices of all time.  His intellect was admired by Americans of all political persuasions and his consistent fidelity to the text and original meaning of the Constitution have transformed the way we all approach the law."

Justice Scalia - Firm in the principles of our nation’s founding documents. He left a great legacy and will be sorely missed.

Utah Rep. Chris Stewart also gave a statement, saying his heart "breaks for my country." and the, "senate must not allow this Pres to seat his replacement."

My heart breaks for my county. Scalia will be missed by millions of Americans. But senate must not allow this Pres to seat his replacement

“Justice Scalia was a titan of the legal community and leaves an indelible legacy on the high court. He was a man of God, a man of principle and an unwavering defender of the rule of law and the Constitution.”