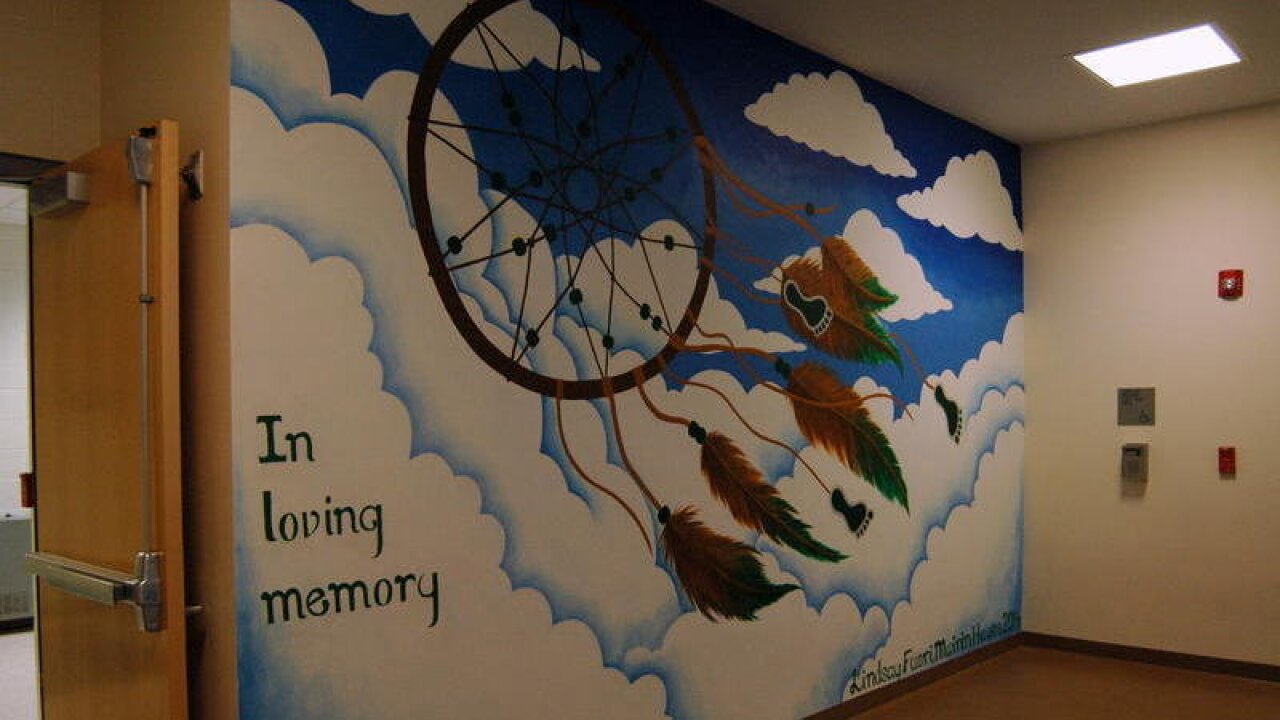 A mural at Newtown High School created by student Lindsay Fuori for her Junior/Senior Project course is titled “Art Therapy” and features a dream catcher, 26 beads, Sandy Hook “Jolly Greet Giant footprints,” and was created in memory of the lives lost at Sandy Hook School on 12/14. Courtesy of Change.org

(CNN) — A Connecticut high school mural honoring the memory of victims of the mass shooting at Sandy Hook Elementary school has been covered over by school administrators.

Lindsay Fuori, now a sophomore at Boston University, was a student at Newtown High School when she decided to honor the victims of the 2012 massacre. She said she attended Sandy Hook as a child and was affected by the shooting. That experience heightened her interest in art therapy and inspired the mural.

The mural, which took about a month to complete with the help of another student, depicted a dreamcatcher with 26 beads represented each victim. It was finished in the end of 2013.

Adam Lanza, 20, used an assault rifle to kill 20 first-grade students and six adults in Newtown on December 14, 2012. Lanza was mentally unstable and used his mother’s Bushmaster AR-15 rifle to kill her before he went on the rampage at the school. He then killed himself.

A mural at Newtown High School created by student Lindsay Fuori for her Junior/Senior Project course is titled “Art Therapy” and features a dream catcher, 26 beads, Sandy Hook “Jolly Greet Giant footprints,” and was created in memory of the lives lost at Sandy Hook School on 12/14. Courtesy of Change.org

The design and location of the mural — on a wall inside a stairwell — was approved by the school, according to Fuori and the Newtown School District Superintendent, Joseph Erardi.

Fuori described the mural as “peaceful and respectful in nature” and told CNN that she received a number of compliments about its design. She said some people told her the mural helped them “know someone else was thinking of them [the victims] and that they weren’t alone in their feelings.”

But nearly a year and a half after the mural’s completion, Fuori received word last April 2015 from her senior project mentor that there were discussions about covering up the mural — something that had never been brought to Fuori’s attention.

The mural included the date of the shootings and the phrase, “In Loving Memory” — details that caused “significant discomfort” to some students, according to Erardi.

Erardi said the decision to cover the mural was made in the spirit of Newtown’s ongoing recovery.

“What you know today may impact decisions made at a previous time,” he said.

Fuori said she met with the superintendent and the high school’s principal to discuss a solution. Originally, she said that there had been discussion about placing a plaque over the date.

But, Fuori said, when she arrived later in the summer of 2015 to install the plaque, she was told that was no longer an acceptable solution.

Instead, she agreed to paint over the date and the phrase, which she did before the beginning of the 2015 fall semester.

In October, Fuori said she received a surprising text message from a friend that included a photo of a blank wall where her mural used to be. She said she was never consulted before the mural was covered.

Erardi said that “a number of communications” were sent to Fuori throughout the process, but he declined to elaborate further.

Erardi said the mural was painted over after students approached administrators to express “extraordinary discomfort” with the painting.

“For a number of students, it served as a reminder of the moment, which was clearly unfair to their learning day,” Erardi said.

“It was done so respectfully,” he added, saying Fuori was offered an opportunity to paint a different mural.

Fuori said the reaction to the concerns of some students was “very immediate.” She said she has no interest in painting another mural.

A Newtown High School student started a petition on Change.org asking that the mural be restored. It currently has 816 signatures.

“Please help get our mural back, not just for us, but for those that we have lost throughout the country from school shootings,” wrote organizer Savannah Mather on the petition.

Erardi said the school’s action was “no easy decision.”

He told CNN a memorial commission has been put in place by the town, and that it is charged with finding an appropriate space and commemoration for the events at Sandy Hook Elementary School.

“Newtown continues to recover from the worst public school tragedy in the history of the country,” he said. “Every recovery is in a different space.”

Fuori said that while it is good to be aware of students’ feelings, the solution to the problem “isn’t as simple as covering a painting.” She worries that students in pain about the Newtown tragedy are not getting the help they need.

“We should help them, not shield them,” she said.