5 takeaways from the Republican debate 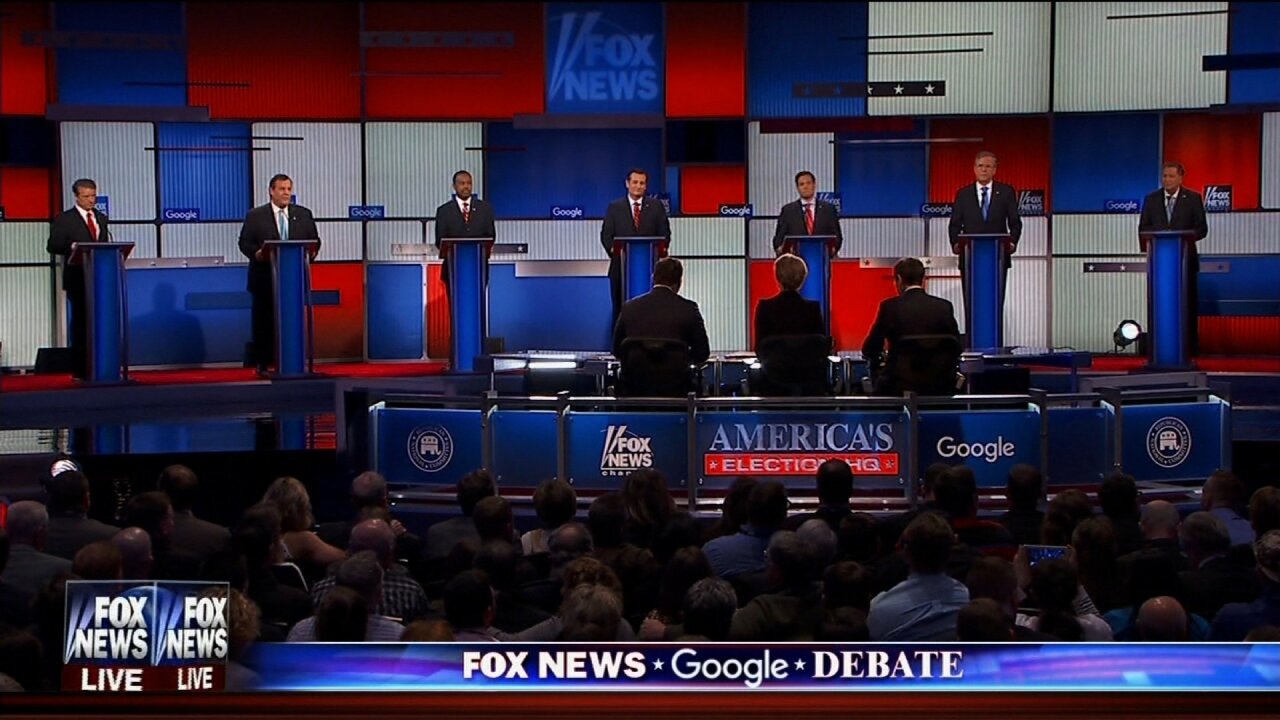 DES MOINES, Iowa (CNN) — The biggest elephant wasn’t in the room — so Ted Cruz stood center stage, taking punches from his opponents and the moderators.

But how much did this matter? The Fox News debate Thursday night exposed few new rifts between the contenders and featured candidates mostly sticking to message.

Donald Trump was elsewhere, and here’s what he missed:

The debate had a lackluster quality, and it’s not just because Trump wasn’t there. Perhaps because Trump’s dominance drove them to desperation in earlier debates, every candidate had thrown his best punch before strutting onto stage Thursday night.

Viewers learned little new about the candidates’ policy stances, and — aside from Jeb Bush showing the kind of passion his supporters have long craved — they also saw few stylistic differences.

This debate won’t change many minds. So close to the first votes being cast, the candidates were either trying not to stumble before the Iowa caucuses, or trying to survive and advance to the New Hampshire primary. It’s time to give them what they want.

Everyone had their one-liners about Trump as the debate opened.

Cruz joked, in his opening statement: “I’m a maniac, and everyone on this stage is stupid, fat and ugly. Ben, you’re a terrible surgeon. Now that we’ve gotten the Donald Trump portion out of the way…”

Offered Bush: “I kind of miss Donald Trump. He was a little teddy bear to me. Everybody else was in the witness protection program when I went after him.”

But for most of the night, he was ignored.

His absence exposed a reality of most of the Republican debates: Bombastic as he’s been, Trump was never really at the center of any policy battles. What he brought was personality — so the only way to tell whether his absence affected much comes not in the substance, but in the TV ratings.

His rival event — a rally and fundraiser for veterans — caused a split-screen atmosphere for GOP voters and even drew two of his competitors to join him. Undercard debaters Mike Huckabee and Rick Santorum — the winners of the last two Republican caucuses in Iowa — stood on stage with the front-runner.

Knives out for Cruz

Without Trump on stage, Cruz entered the night expecting to be bounced around like a pinball.

He survived — but it wasn’t always pretty and some thought the Texas senator did worse than others. The Des Moines Register ruled it a “Rough night for Cruz” in its front-page above-the-fold review of the debate.

He lost a battle of volume with moderator Chris Wallace when he tried to interject early in the debate.

He was hurt the most by Fox News’ decision to use video of candidates’ past statements, too — a move that forced Cruz to explain away an amendment that would have granted undocumented immigrants legal status by hailing his allegiance with Alabama Sen. Jeff Sessions, hardly a household name.

Cruz commanded the stage early in the debate, and withstood most of his opponents’ punches — particularly because none were criticisms he hadn’t heard before.

But the night would have been much easier for him had Trump worn the biggest target.

Cruz, Rubio appeal to the evangelical base

In an alternate, non-Trump world, Ted Cruz and Marco Rubio would be center stage. And they were Thursday night.

Each senator knows that if Trump doesn’t fade, one of the freshman senators of Cuban heritage has to knock the other out to stand a chance beating the real estate mogul head-to-head.

So Rubio was working hard to court evangelical voters — a particularly important constituency in Iowa and South Carolina.

Asked about Time Magazine’s cover proclaiming him a Republican savior, Rubio said: “There is only one savior and it’s not me.”

At another point, he said the Bible “commands us to shine our light on the world.” He pointed to “Judeo-Christian values that encourage us to reach out to the less fortunate.”

It was perhaps the most important dynamic of the debate: Rubio’s attempt to chip into Cruz’s edge among evangelicals — particularly in Iowa, where Bob Vander Plaats, a leader of the religious right, was working his way across the television cameras in the debate hall touting Cruz.

Cruz wasn’t ceding anything — talking religion at every turn, including on energy. “I think God has blessed this country with enormous natural resources,” Cruz said. And at the end, he asked voters to “examine our records and pray on it.”

Too little, too late?

The advantage for candidates like Rand Paul, Jeb Bush and John Kasich is they had a chance to talk about their policy visions without Trump taunting them about their low poll numbers.

Paul — once an undercard debate-skipper himself and facing the potential for exclusion from ABC News’ debate before the New Hampshire primary — had a good night showcasing his libertarian leanings. He called out Cruz for not showing up for the vote on the “audit the Fed,” and needled the Texan, saying of his campaign: “It’s a falseness, and that’s an authenticity problem.”

Bush, too, had a good night — showing the kind of passion as he squared off with Rubio on immigration that his supporters wanted from the beginning of his campaign.

Noting the policy similarities between them, he credited Rubio for trying to lead on immigration in 2013 — “and then he cut and run because it wasn’t popular amongst conservatives, I guess.”

Christie could also win plaudits from conservatives for his assertion that his Justice Department would prosecute Hillary Clinton.

“I will be ready. I will take her on, and when I take her on I guarantee you one thing, she will never get within 10 miles of the White House. The days for the Clintons in public housing are over.”