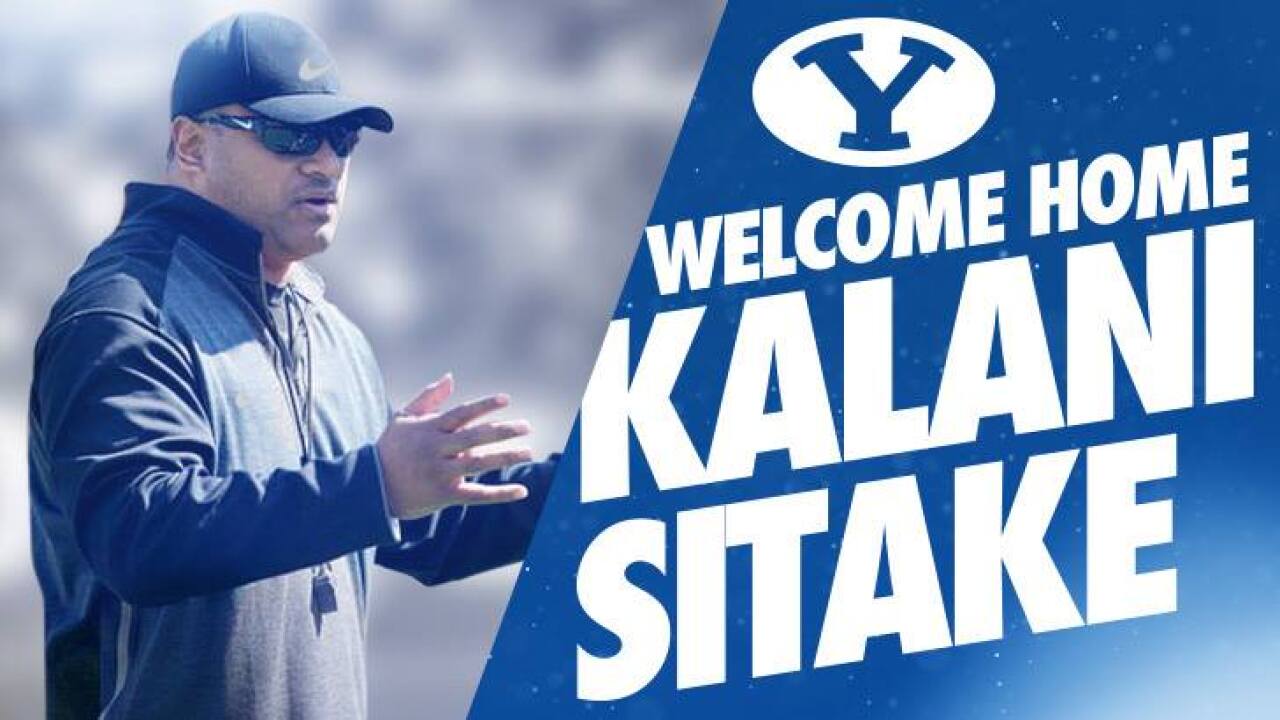 PROVO, Utah -- Kalani Fifita Sitake has been named the new head football coach for the Brigham Young University Cougars, according to a press release from the school.

Director of Athletics Tom Holmoe made the announcement of Bronco Mendenhall's replacement shortly after BYU finished their final game of the season, a 35-28 loss to rival Utah in the Royal Purple Las Vegas Bowl.

“We are excited to announce Kalani Sitake as our new head football coach and welcome back one of our own,” Holmoe stated in a press release. “He is an outstanding leader and coach, an exceptional recruiter and knows BYU through and through. We look forward to having Kalani build on the great tradition of BYU football.”

Sitake is no stranger to the program, as he played for the Cougars as a running back in 1994 and from 1997-2000. He also spent 10 years with the University of Utah--seven years as a defensive coordinator and four seasons as an assistant head coach, according to the press release. Sitake was most recently the defensive coordinator/assistant head coach with Oregon State.

“I’m honored, excited and humbled by the opportunity to lead the BYU football program,” Sitake stated in the press release. “I’m grateful for everything BYU gave me as a player. It’s a dream come true for me to return home. I love the university and what it stands for and I’m looking forward to helping the young men in the program reach their goals athletically, academically and spiritually. I want to thank Tom Holmoe, President Worthen and the administration for their faith and trust. I’m excited to get to work and continue the incredible legacy of BYU football.”

Sitake also expressed gratitude to those he's learned from in his career.

“I want to express my appreciation to Gary Andersen and Kyle Whittingham who have given me tremendous opportunities in my career and helped prepare me for the chance to be a head coach,” Sitake stated. “I am forever grateful to them and all the other great coaches I’ve worked with and players I’ve coached throughout my career.”

A post from BYU football welcomed Sitake back to Provo.

The press release also provides biographical details about Sitake, see below for details:

Sitake began his coaching career in 2001 as the defensive backs and special teams coach at Eastern Arizona before becoming a defensive graduate assistant at BYU in 2002. Sitake then joined the staff at Southern Utah where he coached running backs, tight ends and offensive line during the 2003 and 2004 seasons.

Born in Nuku’alofa, Tonga, and raised in Laie, Hawai’i and Provo, Utah, Sitake becomes the first FBS head football coach of Tongan descent. He is the 14th head coach in BYU history, and just the fourth since 1972, when Hall of Fame coach LaVell Edwards took over the program.

Sitake began his BYU playing career in 1994 prior to serving a two-year mission for The Church of Jesus Christ of Latter-day Saints to Oakland, California. After returning and redshirting in 1997, Sitake was a three-year starter at fullback for the Cougars from 1998-2000 under Edwards.

He was named BYU’s Football Scholar Athlete of the Year in 1998, Impact Player of the Year in 1999, along with team captain and the most valuable running back in 2000. He signed a free agent contract with the Cincinnati Bengals in 2001, but was forced to retire due to an injury.

Sitake graduated from BYU in 2000 with a bachelor’s degree in English. He and his wife Timberly have three children, Skye, Sadie and Kelaokalani (KK)."