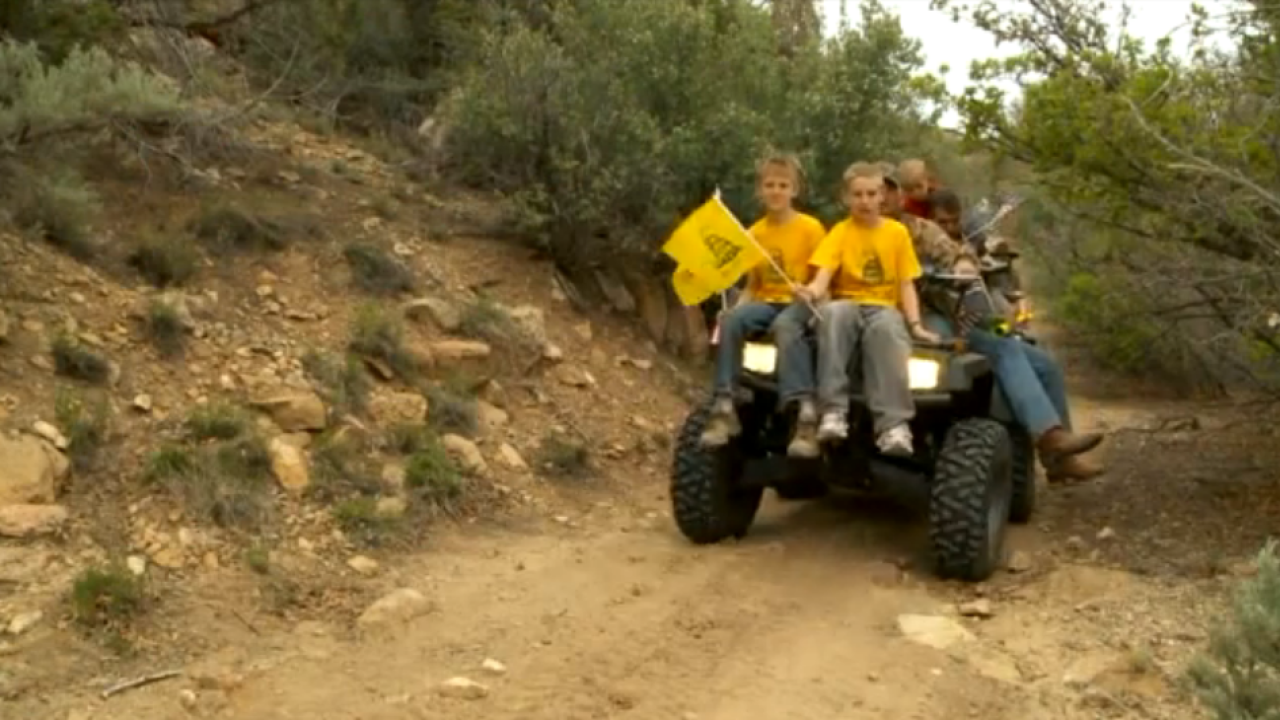 ATV riders in Recapture Canyon as part of a protest over use of public lands in May 2014. (FOX 13 file image)

SALT LAKE CITY - A county commissioner who led a protest ride into southeastern Utah's Recapture Canyon was sentenced to serve 10 days in jail.

The judge also banned Lyman from encouraging others to break laws on federal lands.

"I'm going to impose a prohibition against advocacy of land use law violations," Nuffer said.

Lyman will be allowed to self surrender to serve his 10 days behind bars sometime in April at Washington County's Purgatory Jail. He and co-defendant, Monte Wells, will have to pay $96,000 in restitution. Wells was sentenced to five days in jail.

Lyman and Wells were convicted by a jury for their roles in the May 10, 2014 protest ride in Recapture Canyon, where people drove ATVs through the area in protest of federal road closures. The area had been closed off by the BLM. Federal prosecutors claim Lyman organized the protest and Wells publicized it.

Speaking to the judge, Lyman was emotional as he described the problems that San Juan County faces and the frustration people have with the federal government.

"I feel like I'm a reasonable person, but as an elected official, I hear the concerns," he said.

ATV riders in Recapture Canyon as part of a protest over use of public lands in May 2014.

"This was not an anti-government rally," Lyman told the judge. "I love the federal government."

In his own remarks to the judge, Wells, whom prosecutors accused of helping Lyman publicize the protest ride, said he has learned his right to protest is "not absolute."

"In the future, when I disagree with a government action, I will express myself in a legal, lawful manner," he cried.

Sitting in the courtroom were numerous county commissioners and lawmakers representing rural Utah. Many of them have been involved in years-long feuds with the federal government over road and land rights issues.

FOX 13 has confirmed Governor Gary Herbert wrote a letter to Judge Nuffer in support of Lyman. A spokeswoman for Herbert said it was not on state letterhead and was not in his official capacity. She described it as a "character reference."

Speaking to both Lyman and Wells after pronouncing sentence, Judge Nuffer called for political rhetoric over federal and state issues to be scaled back.

He urged both sides to come together.

"We're all people. Can we reduce the bitterness and the battle and the conflict?" Nuffer said.

Outside court, Lyman refused to comment. His attorney, Peter Stirba, would not say if they planned to appeal the conviction.

"He obviously was very thoughtful and reasoned in what he did," Stirba said of the judge. "Aside from that, it would be entirely inappropriate for me to comment further. Needless to say, Mr. Lyman is happy it’s over."

Wells' attorney, Nathan Crane, told FOX 13 they might explore an appeal of the conviction.

"You can’t poke law and order in the eye and expect reasonably that nothing will come of it," he said.