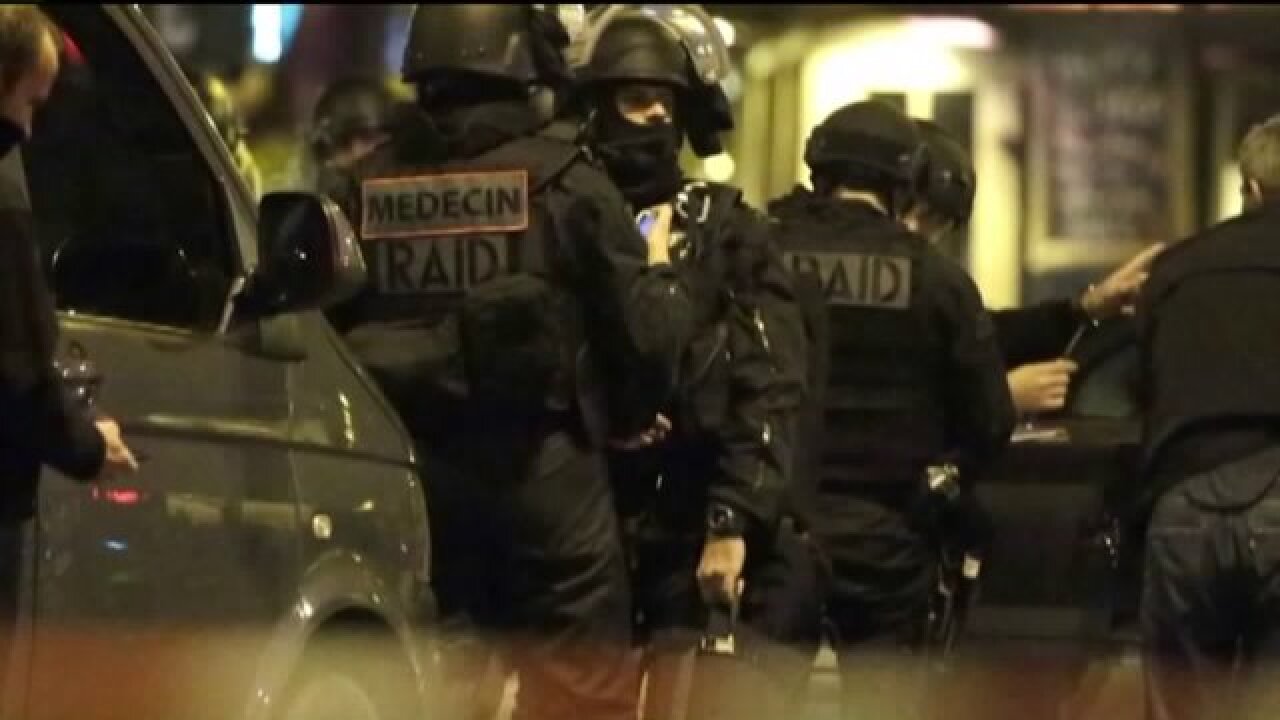 NOTE: The entries below represent a series of updates reported by multiple media outlets throughout the day regarding the attacks in Paris, and in some cases those reports offer conflicting details. For a summary of the events and details on what we know so far according to CNN, click here.

UPDATE: 10:12 p.m. MT: CNN reports that of the eight assailants reportedly killed after the attacks, seven of them died in suicide bombings.

UPDATE: 9:51 p.m. MT: The Associated Press reports that eight attackers are believed to be dead, and others may possibly be at large. They also report that up to 70 Americans are unaccounted for after the attacks.

Paris prosecutor says 8 attackers dead, possibly others at large; up to 70 Americans unaccounted for: https://t.co/FUyHd3erRy

UPDATE: 7:58 p.m. MT: Fox News reports that all assailants involved in the Paris attacks are believed to be dead.

UPDATE: 6:37 p.m. M.T.: Fox News reports that all amenities in Paris, from schools to shopping markets to swimming pools and so forth, will be closed on Saturday in response to the attacks.

They are also reporting that five assailants have been killed in connection with the attacks, and other suspects are believed to be at-large.

UPDATE: 6:14 p.m. MT: Fox News reports the death toll in the attacks in Paris is 158. CNN is reporting they've confirmed 153 people were killed, including 112 who were at the Bataclan concert venue, according to the French interior ministry.

Witnesses report some of the hostages managed to escape the shooters in the concert hall by moving up to the roof area and climbing through a window.

UPDATE: 5:55 p.m. MT: Fox News reports that a total of four assailants are confirmed to be dead after the attacks. Fox News states police report 140 people have been killed.

UPDATE: 5:53 p.m. MT: CNN reports As many as 118 people were killed in the attacks in Paris, according to Deputy Mayor Patrick Klugman.

UPDATE: 5:40 p.m. MT: CNN reports French President Fancois Hollande is on his way to the concert hall, where police say as many as 100 people were killed during the attack there.

FOX News reports that witnesses stated they saw the two gunmen in the concert hall throwing grenades at hostages. There were reports of five or six explosions from inside the building earlier.

UPDATE: 5:15 p.m. MT: Fox News reports that as many as 100 people inside the concert hall were killed after two attackers armed with guns, and possibly explosives, took hostages then began executing people. Dozens of others were reportedly killed in the series of seven attacks in Paris.

UPDATE: 4:53 p.m. MT: Fox News reports 12 hostages were rescued and taken to safety after police stormed the concert hall in Paris, where gunmen were reportedly killing hostages "execution-style." Two suspects have reportedly been killed, according to police in Paris.

Earlier reports indicated about 100 people had been taken hostage at the concert hall, and, while there were reports of gunmen killing hostages inside, it is unclear how many survived and how many were killed in the attack.

Police in Paris tell Fox News the attack on the concert hall has now ended and that both attackers were killed.

Paris is under a curfew for the first time since World War Two.

UPDATE: 4:48 p.m. MT:  Fox News reports that at least some of the hostages in the concert hall are alive after reports of shots fired and explosions from inside the building.

Fox News also reports that one arrest has been made, but it is unclear what that suspect's connection is to the series of attacks.

CNN reports: French radio reporter Julien Pearce was inside the Bataclan theater when gunmen entered. Click here for his firsthand account.  He said Two men dressed in black started shooting what he described as AK-47s, and after wounded people fell to the floor, the two gunmen shot them again, execution-style, he said. The two men didn't wear masks and didn't say anything. The gunfire lasted 10 to 15 minutes, sending the crowd inside the small concert hall into a screaming panic, said Pearce, who escaped. He said he saw 20 to 25 bodies lying on the floor. The hostage situation at the Bataclan continued early Saturday.

UPDATE: 4:35 p.m. M.T. The Church of Jesus Christ of Latter-day Saints reports all of their missionaries based in Paris are safe and are being asked to stay inside until further notice.

UPDATE: 4:34 p.m. MT: Fox News reports there have been confirmed explosions at the concert hall in Paris where hostages were taken and that police are storming the building.

They also report New York is on high alert, and all schools in universities in France will be closed Saturday.

UPDATE: 4:24 p.m. MT: Fox News' Shepard Smith is citing multiple reports indicating that the gunmen in Paris are believed to be executing hostages one-by-one in the theater.

UPDATE: (CNN) -- One of the explosions at the Stade de France outside Paris appears to be a suicide bombing, a Western intelligence source receiving direct intelligence from the scene tells CNN. A dismembered body, consistent with that type of device, was found at the scene, the source said.

PARIS (CNN) -- On a night when thousands of Paris residents and tourists were reveling and fans were enjoying a soccer match between France and world champion Germany, horror struck in an unprecedented manner. Terrorists -- some with AK-47s, some reportedly with bombs strapped to them -- attacked sites throughout the French capital and at the stadium where the soccer match was underway.

Scores were killed in the coordinated attacks late Friday, leaving a nation in mourning and the world in shock. CNN will update this story as information comes in:

• Paris Prosecutor spokeswoman Agnès Thibault-Lecuivre said eight extremists are dead after attacks. Seven of them were killed in suicide bombings.

• U.S. President Barack Obama spoke with French President Francois Hollande to offer condolences and assistance in the investigation, the White House said. Earlier, Obama said, "This is an attack not just on Paris, not just on the people on France, but an attack on all humanity and the universal values we share." He called the attacks an "outrageous attempt to terrorize innocent civilians."

• A total of six locations were attacked in and just outside the capital, Paris prosecutor François Molins told reporters Saturday.

• Five suspected attackers have been "neutralized," said Molins. It was unclear whether that term meant the terrorists were dead.

• At least 153 people were killed in the Paris and Saint-Denis shootings and bombings, French officials said. Saint-Denis is home to the national stadium where the soccer match was being played.

• The worst carnage occurred at Bataclan, with at least 112 left dead. A journalist who was at a rock concert there escaped and told CNN: "We lied down on the floor not to get hurt. It was a huge panic. The terrorists shot at us for 10 to 15 minutes. It was a bloodbath." Julien Pearce didn't hear the attackers speak, but he said one friend who escaped heard them talk about Iraq and Syria. Later, he said the men were speaking French. Two men dressed in black started shooting and after wounded people fell to the floor, the gunmen shot them again, execution-style, he said.

• Charlotte Brehaut and a friend were dining in Le Petit Cambodge, a Cambodian restaurant, when the shooting started from the street, she told CNN. "All of a sudden we heard huge gunshots and glass coming through the windows. We ducked with the other diners," she said. She grabbed the arm of a woman on the floor. The woman didn't respond. The woman was shot in the chest and there was blood all around her. At least 14 people were killed in Le Petit Cambodge, authorities said.

• There is great alarm over the apparent methodology and likely planning that would have been needed to pull off such a series of attacks, one U.S. counterterrorism official told CNN. The attacks resembled tactics that have been used by a number of terror groups -- including al Qaeda's focus on mass casualties and visibility, and the small, tactical nature of attacks that are more the hallmark of ISIS and its acolytes. It is still not clear who is responsible.

• U.S. citizens in Paris who are safe are being asked by the State Department to call their families. Those Americans in France needing assistance should call 001-202-501-4444. Americans concerned about loved ones in Paris should call 1-888-407-4747. An official told CNN the hotline was flooded with calls.

• Michael Dorio, brother of a member of the band that was playing at the Bataclan concert, said he spoke to Eagles of Death Metal drummer Julian Dorio about 20-30 minutes after the attack. "He said he had been performing and heard the gunshots. They stopped playing and hit the deck and went backstage and exited," Michael Dorio told CNN.

• BFMTV reports that SWAT units stormed Bataclan and that the siege was over. Two attackers were killed, a police union said. Police brought out at least 100 hostages from the concert hall, a CNN producer said; some appear to be wounded. Hollande told reporters outside Bataclan that "terrorists capable of carrying out such atrocities must know that they will face a France that is determined and united."

• Deputy Mayor Patrick Klugman told CNN the death toll is going to rise significantly. "We are facing an unknown and historic situation in Paris," he said.

• Hollande called the events "unprecedented terrorist attacks" and added, "This is a horror." In a tweet, he said, "Faced with terror, this is a nation that knows how to defend itself, how to mobilize its forces and once again, knows how to overcome the terrorists."

• One of the explosions at the Stade de France, home of the French national sports teams, outside Paris appears to be a suicide bombing, a Western intelligence source receiving direct intelligence from the scene told CNN's Deb Feyerick. A dismembered body, consistent with the aftermath of an explosion from that type of device, was found at the scene, the source said. Watch: Explosion heard at Paris soccer game

• People were inviting people off the streets into their apartments, reports Philip Crowther, Washington correspondent for France 24.

• Traffic on several subway lines has been interrupted following the attacks, the Paris police prefecture reported.

• There is no credible or specific threat in the United States, according to a U.S. government official. An FBI spokesperson said the agency and the Department of Homeland Security were closely monitoring the unfolding events.

• Hollande, in an address to the nation, said he had declared a state of emergency, meaning borders will be closed. "We have to show compassion and solidarity and we also have to show unity and keep our cool. France must be strong and great," he said.

• The Paris prefecture of police instructed residents to stay home. The prefecture said via Twitter that people should stay inside "unless there's an absolute necessity."

• French authorities have launched a terrorism investigation, Eric Pelletier, a reporter with Le Pariesien, tells CNN Paul Cruickshank. There has been no official claim of responsibility, though ISIS has applauded the attacks on Twitter, Cruickshank reports.

• Russian leader Vladimir Putin sent his condolences to Hollande and the people of France. "Russia strongly condemns this inhumane killing and is ready to provide any and all assistance to investigate these terrorist crimes," he said.

In early January of this year, two gunmen attacked the Paris offices of the French satirical magazine Charlie Hebdo, killing 12 and wounding 11.

Said and Cherif Kouachi wanted to punish the magazine for the publication of cartoons that they believed mocked the Prophet Mohammed. The Kouachi brothers two days later were shot and killed in a standoff with police in Dammartin-en-Goele.

Amedy Coulibaly, an associate of Said and Cherif Kouachi, attacked a Jewish grocery store in Paris, taking more than a dozen people hostage and killing four. Coulibaly had killed a policewoman the day before, on January 8. Coulibaly was killed when police stormed the kosher market.