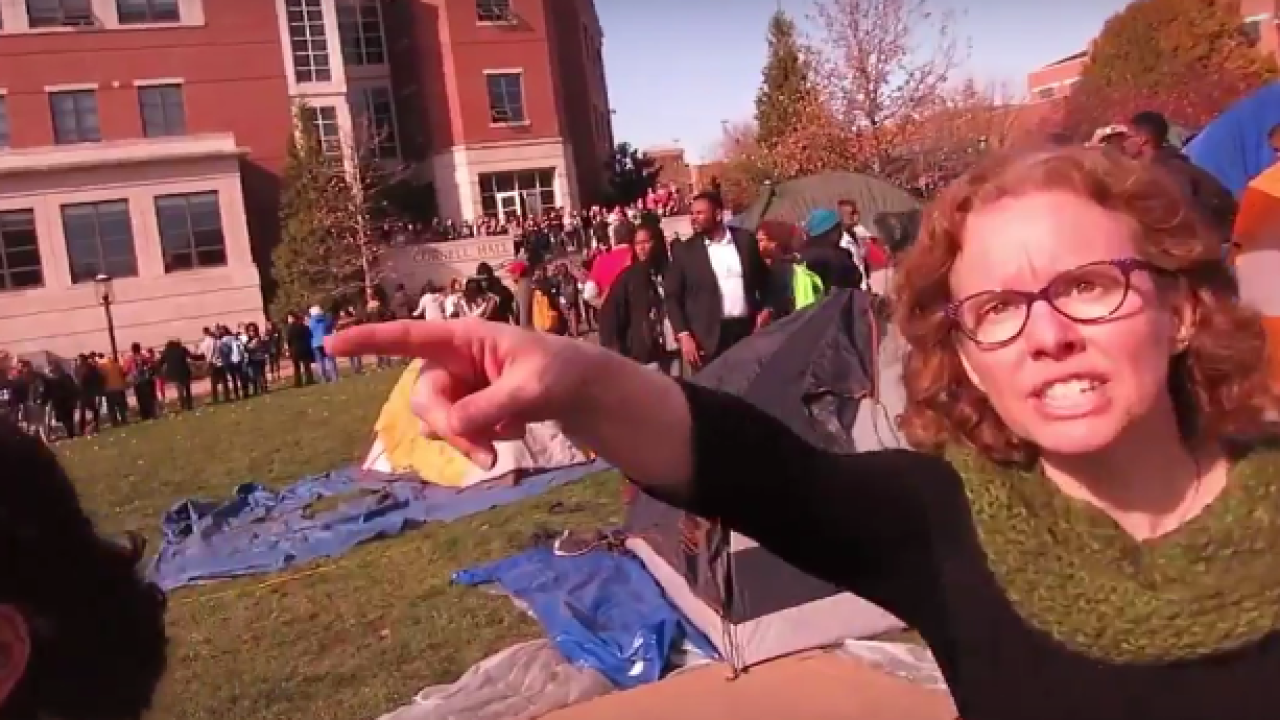 A confrontation between members of the media and student activists has sparked debate at the University of Missouri, a campus already embroiled in a controversy over race.

A video posted to YouTube on Monday shows Missouri students and faculty trying to restrict media access to a tent encampment used by activists who have complained of racism on the overwhelmingly white campus.

In the video, protesters surround Tim Tai, a student photojournalist hired by ESPN to cover the protests, and push him away from the tents used by the activist group, which calls itself “Concerned Student 1950.”

Protesters can be heard chanting, “Hey, hey, ho, ho, reporters have got to go,” as they block Tai’s camera and prevent him from moving toward the encampment.

The journalist counters by telling activists that the First Amendment protects his right to photograph in a public space.

“I’m trying to take pictures, trying to get the scene,” Tai told CNNMoney. “Immediately they start putting their hands up, blocking my shot. They say, ‘You can’t be on the grass,’ which is patently absurd.”

Faculty members also get into the mix. The video shows a woman, who appears to be Melissa Click, an assistant professor of mass media, trying to get another reporter to leave the university quad.

“Hey, who wants to help me get this reporter out of here?” Click said. “I need some muscle over here.”

This happened just days after a she posted on her Facebook page asking for national media to cover the happenings at the university, according to TheBigLead.com.

Tai said that other news photographers on campus were similarly treated.

The actions of protesters sparked an immediate backlash among professional journalists, many of whom said that Tai should have been allowed to take photographs on public property.

“I don’t want to make this about me, because journalism is good when it’s collaborative and not antagonistic,” Tai lamented. “I didn’t accomplish anything. I didn’t make any good pictures from that moment.”

The activists defended their actions, saying on Twitter that “it’s typically white media who don’t understand the importance of respecting black spaces.”

“We ask for no media in the parameters so the place where people live, fellowship, & sleep can be protected from twisted insincere narratives,” they said.

However, David Kurpius, dean of the Missouri School of Journalism released this statement:

“The Missouri School of Journalism is proud of photojournalism senior Tim Tai for how he handled himself during a protest on Carnahan Quad on theUniversity of Missouri campus.

University of Missouri System President Tim Wolfe and University of Missouri-Columbia Chancellor R. Bowen Loftin both resigned on Nov. 9 after complaints and protests of their leadership. Tai was covering the event as a freelancer for ESPN when protesters blocked his access through physical and verbal intimidation.

The news media have First Amendment rights to cover public events. Tai handled himself professionally and with poise.

Also, for clarification, Assistant Professor Melissa Click, featured in several videos confronting journalists, is not a faculty member in the Missouri School of Journalism.

She is a member of the MU Department of Communication in the College of Arts and Science. In that capacity she holds a courtesy appointment with the School of Journalism. Journalism School faculty members are taking immediate action to review that appointment.

The events of Nov. 9 have raised numerous issues regarding the boundaries of the First Amendment. Although the attention on journalists has shifted the focus from the news of the day, it provides an opportunity to educate students and citizens about the role of a free press.”

Black student leaders at the university say that administrators have ignored several instances of racism on campus, including the open use of racial slurs.

Several University of Missouri organizations, including the football team and the student association, have backed their calls.

Saying he takes “full responsibility for the inaction that has occurred,” Wolfe asked that the university community listen to each other’s problems and “stop intimidating each other.”

Editor’s note: Rob McLean, who contributed to this article, is the Region 7 director of the Society of Professional Journalists, which includes Missouri.