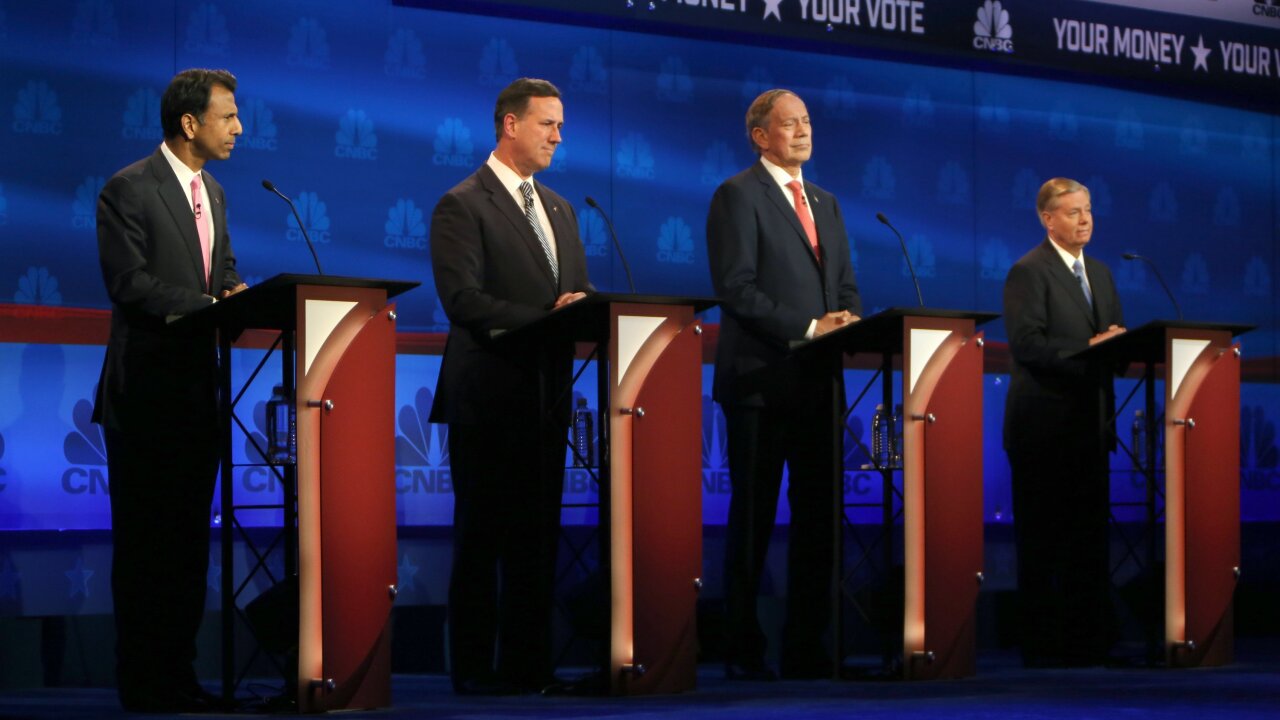 The participants in the CNBC “Your Money, Your Vote: The Republican Presidential Debate” live from the University of Colorado Boulder in Boulder, Colorado Wednesday, October 28. Credit: Jason Bahr/CNBC

Sparks flew between the two Republican presidential candidates tonight at the third GOP presidential debate of the campaign season.

In the most intense exchange between the two men this cycle, Bush went after Rubio for missing votes in the Senate while running for the White House — an issue that critics have seized on.

“Marco, when you signed up for this, this was a six-year term and you should be showing up to work,” Bush said. “What is this, like a French work week?”

Bush then delivered another punch: “Just resign and let someone else take the job.”

Rubio fired back, saying Bush never took issue with Sen. John McCain missing votes when he was running for president.

“The only reason you’re doing it now is because we’re running for the same position,” the senator said.

Before the exchange, one of the biggest questions looming over the debate was whether Donald Trump would attack Ben Carson, who is surging in the polls. Since launching his campaign this summer, Trump reserved his bomb-throwing tactics for more established politicians in the GOP field, such as Bush and Rubio.

Ahead of the prime-time debate, the lowest-ranking GOP candidates — Rick Santorum, Bobby Jindal, George Pataki and Lindsey Graham — battled it out at a 6 p.m. ET “undercard” event.

For all four men, the pressure’s on to raise their national poll numbers to qualify for the main debate stage hosted by Fox Business Network on Nov. 10. The so-called undercard candidates offered their views on a budget agreement passed by the House earlier in the day that would lift the debt ceiling and avert a government shutdown.

Graham, a national security hawk, called President Barack Obama an “incompetent commander in chief” but said he approved provisions in the deal that would add billions of dollars to the Defense Department’s budget. Pataki, who was equally critical and accused Obama of holding the military “hostage,” said though he believed it was a “bad deal,” he would sign it in order to “protect our military.”

Jindal was critical of the agreement, but said closing the government over the budget deal was a “false choice.”

Graham was put on the spot for several policy stances unpopular among conservatives, including believing climate change is real, being willing to accept tax increases and supporting a path to citizenship for those who are in the country illegally.

“I’m not a scientist and I’ve got the grades to prove it,” Graham said, drawing laughter from the room. But the majority of scientists, he added, “are telling me that greenhouse gas effects are real, that we’re heating up our planet.”

Regarding immigration, Graham said he doesn’t believe in mass deportation, but instead wants to fix the problem by, in part, securing the country’s borders. “I want to talk about fixing the problem.”

Heading into the prime-time showdown, Trump’s new vulnerability also offers political openings for his other, lower-ranking rivals, who have suffered from the bombastic real estate mogul’s dominance.

Bush, whose campaign is badly in need of a jolt of energy and is one of Trump’s favorite targets, seems particularly eager to put Trump on the spot. The former Florida governor also seems increasingly focused on drawing a contrast between himself and Rubio, his one-time mentee.

Carly Fiorina, who gave an impressive performance at last month’s CNN debate and directly took on Trump, may also want to seize on the opening to try to bring up her single-digit poll numbers.

The other candidates taking the debate stage at 8 p.m. ET at the Coors Event Center at the University of Colorado campus here are Chris Christie, Ted Cruz, Mike Huckabee and Rand Paul.