Marathon in Utah makes list of top 7 U.S. marathons worth the trip 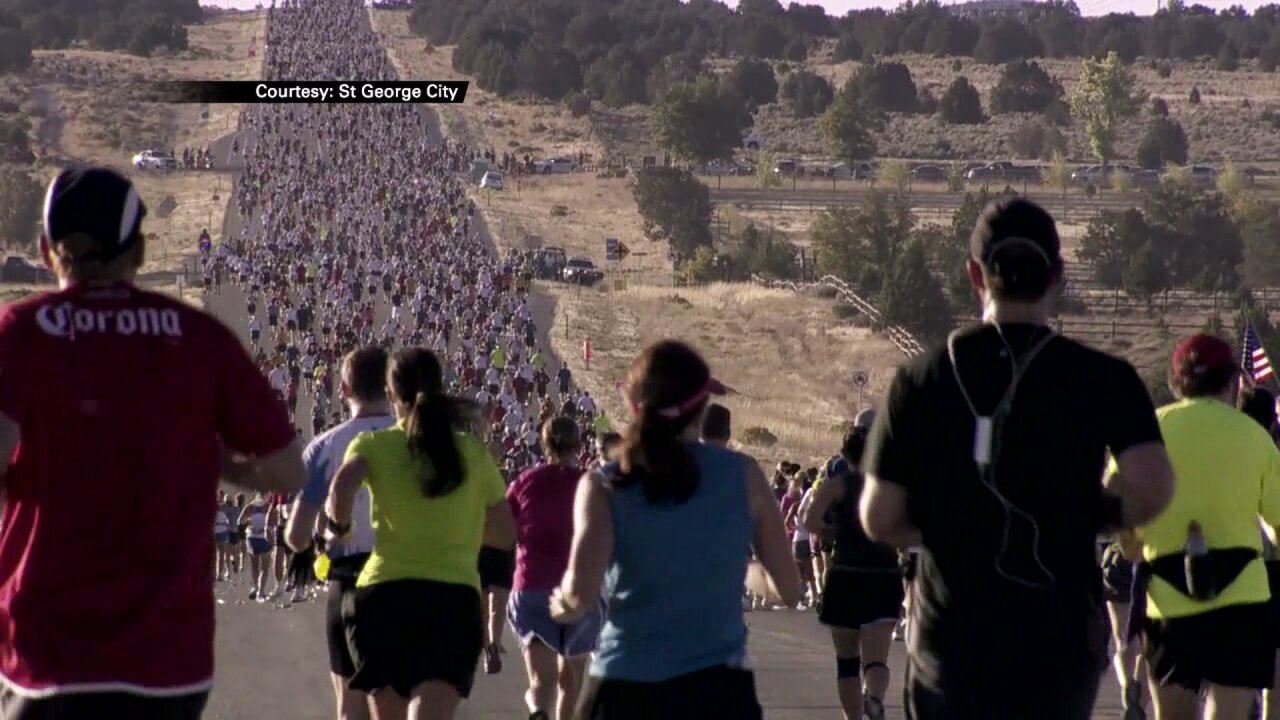 Glance at social media and it seems everyone is out in their Lycra, training for their next 26.2 mile dash.

Compare that to 1976 (25,000 finishers) and we’ve clearly come a long way since this feat was strictly reserved for elite athletes and crazy people.

“The sense of personal empowerment, accomplishment and achievement that comes with training for and running a marathon is simply amazing.” says renowned running trainer, Olympian and co-author of “America’s Best Places to Run,” Jeff Galloway, who has run more than 200 of them.

So where should you consider fastening your next (or first) bib?

Here’s an inspiring shortlist of favorite destination marathons chosen by a panel of inveterate marathoners.

Rundown: One of the largest marathons in the country (over 30,000 participants) — and earliest (check your alarm volume for that 5 a.m. start time) — Honolulu’s is also one of the most merciful, with no cutoff time.

The race is on until the very last person crosses the finish line and collects a medal.

It’s all “in keeping with the Aloha spirit of Hawaii,” say race organizers, who in 2010 welcomed 92-year-old Gladys Burrill to the finish line in just under 10 hours — until recently, the oldest woman to ever complete a marathon.

Plus, this is Hawaii.

Run. Walk. Admire Oahu’s pinup coast and landmarks along the way, including the only royal palace on American soil.

Route: The mostly flat coastal run begins on Ala Moana Boulevard, continues through downtown Honolulu, Waikiki and the suburbs east of town before looping back along the Kalanianaole Highway to the finish at Waikiki’s Kapiolani Park.

Rave review: “Go for the marathon — recover on the beaches,” says Hadfield. “It’s a perfect blend of running through the beautiful sites of Honolulu with a relaxing Hawaii vacation.”

Road rules: Entry fee $185 (USA & Canada), $230 (international). Pick up your bib (and everything else) at the free four-day Hawaii Marathon Expo preceding the run.

Don’t miss the lead-up Luau (buffet and concert) at the Waikiki Shell on Friday, December 11.

Rundown: Launched by local news anchor and three-time breast cancer survivor Donna Deegan, the Florida coast’s most inspiring marathon is much more than just a great beach run in February.

Since its inception in 2008, the “26.2 with Donna” run has helped raise millions of dollars for breast cancer bench research at the Mayo Clinic and for under-served breast cancer patients through The Donna Foundation.

Route: Starting at ATP Tour Boulevard in Ponte Vedra Beach — continuing through the neighboring ocean-side communities of Jacksonville Beach, Atlantic Beach and Neptune Beach on coastal route A1A with scenic stretches along the Intracoastal Waterway — before ending at the Mayo Clinic.

Rave review: “The energy of the volunteers and spectators at this event, embedded with many pink wig runners who are under treatment, leaves you empowered for months,” says Galloway.

The course time limit for both the marathon and concurrent half marathon is seven hours.

Rundown: Whizzing up the Big Sur coast the usual way — behind the wheel — with its stunning vistas, marine wildlife-spotting and white-knuckle Bixby Bridge crossings is dramatic beyond words.

Running the Big Sur Marathon is an even more breathless way to experience the nation’s first nationally designated Scenic Highway.

It’s one of the most spectacular challenges anywhere, and popular too.

Hopeful marathon participants now have to register by lottery.

If you miss the draw, additional events that day include 21- and 10.6-milers, a 5-kilometer race and a marathon relay along the same course.

Route: Big Sur Village to Carmel along Highway One, with over 2,000 feet (610 meters) of elevation gain, including a two-mile (3.2-kilometer) hill at Hurricane Point near mid-course.

Rave review: “I’ve not seen a more scenic marathon course than this one,” says running pundit Jeff Galloway, who has logged over 200 marathons.

“Nearby wineries, beaches, Spanish Missions, art shops and even a great [Monterey Bay] Aquarium make this a great destination vacation — with endorphins.”

Marathon lottery registration ends on July 28 with a “last chance” drawing from August 18 to 24.

About 30,000 participants hoof past storied landmarks like the Country Music Hall of Fame and 28 sound stages full of Music City-caliber performers to keep spirits and soles moving.

Route: Starts on Lower Broadway — looping through downtown Nashville and pretty neighborhoods — finishing across the Cumberland River at Nissan Stadium.

Rave review: “You’re running past musicians playing on the street who’ll be on stage at the Country Music Awards show three years later,” says former “Runner’s World” columnist and longtime RnR announcer John Bingham, who has run 45 marathons and been the voice at about 200 others.

“After the race you can put on your cowboy boots and straw hat, grab a long-neck beer and learn to line dance. Perfect way to recover.”

The closing act is a post-race concert at Bridgestone Arena, free to registered runners.

Anchorage Mayor’s Marathon and Half Marathon

Rundown: Anchorage is home to one of the most scenic city-meets-wilderness marathon settings anywhere, with six mountain ranges visible from town on a clear day, including the nation’s highest peak.

Participants in the event’s flagship “Midnight Sun Marathon” (several other races happen that day as well) get to simultaneously experience one of the longest runs and longest days of their lives.

Held on the Saturday closest to the summer solstice, the run starts at 7:30 a.m. (more than three hours after sunrise) and ends well before an 11:43 p.m. sunset.

Route: East to West Anchorage, from the Chugach Mountain foothills to the Cook Inlet.

“The course runs through the foothill trails and the scenic trails on the coast where it’s not uncommon to see a moose along the way.”

Road rules: Participants must complete the course within an eight-hour time limit to be considered an official finisher — which still qualifies walkers going at a sub-20-minute mile pace.

Rundown: Never mind all the sprinters up front.

Most of the 45,000-plus participants from more than 120 countries aren’t just flocking to this flat, fast home of four world records to beat their personal best or qualify for somewhere else.

The clear star of this show: Chicago, with its 1.7 million cheering spectators, its towering edifices, crazy dining, myriad neighborhoods and its rightful inclusion among five other World Marathon Major sites (New York, Boston, London, Berlin, Tokyo) that need the extra press even less.

Rave review: “It may be ‘the Second City’ but Chicago is one of the greatest places to visit,” says Bingham.

“Stay at a downtown hotel, walk to the start/finish line, race through all the neighborhoods, and discover along the way that Chicago isn’t really a big city but a diverse group of ethnic communities.”

Rundown: Deep in southwest Utah — 119 miles from Las Vegas, 300 miles from Salt Lake City, 2,600 miles from Boston — the desert town of St. George hosts what “Runner’s World” has called one of only four “Marathons to Build a Vacation Around” — anywhere.

Also hiding here: one of the fastest courses on the USA Track & Field certified list, and one of the most scenic according to many.

Side trips: Zion National Park is less than an hour from town, and the quiet North Rim of the Grand Canyon (still open in early October) a relatively short 116 miles.

Route: Runners are bused up to the starting line in the Pine Valley Mountains (5,240 feet) and run back down to St. George (2,678 feet) through desert valleys and canyons along Utah State Route 18.

Rave review: “The scenery is stunning and the small town friendliness makes this a very special race,” says Bingham.

“Sitting around small fires in the desert with groups of runners waiting for the sun to come up and the race to begin is quite an experience too.”

Runners must be able to complete the course within six hours and 15 minutes.

Marathon registration runs through April to early May.