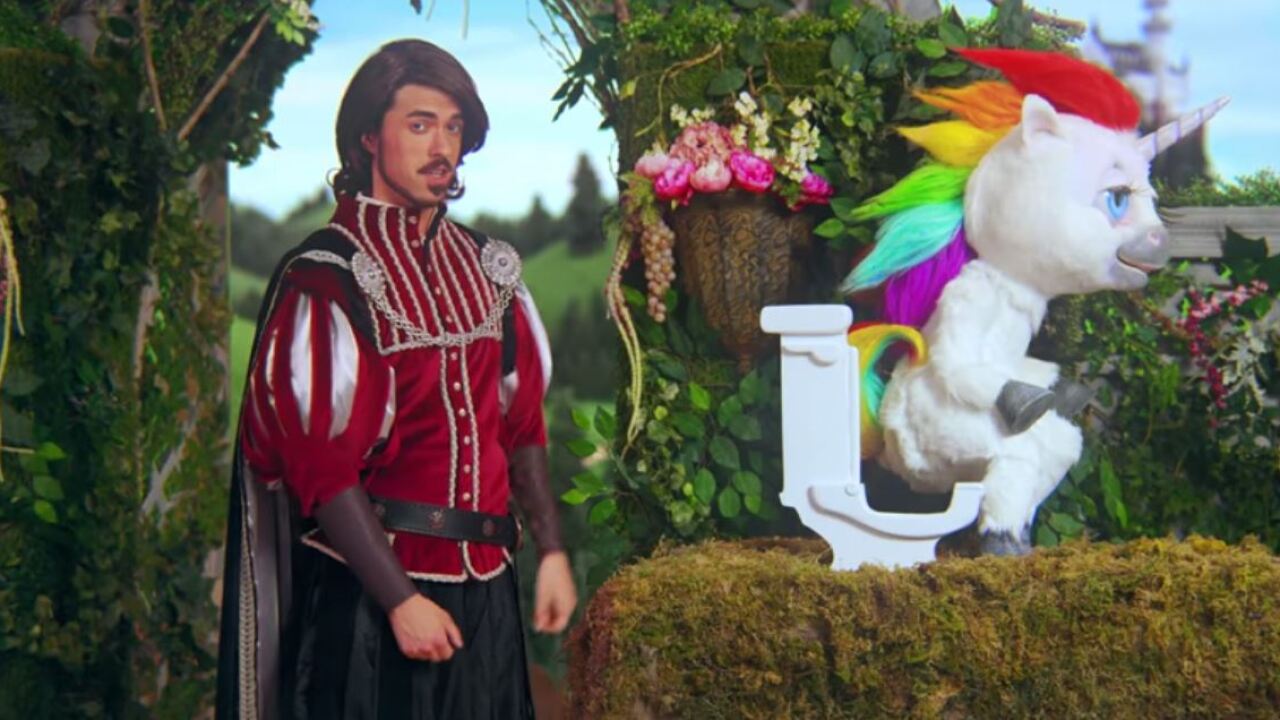 SOUTHERN UTAH — A Utah company with a product associated with a taboo topic is enjoying some viral success after they sidestepped the gross factor involved with explaining the “Squatty Potty” by turning to a mythical creature voiding rainbow-colored excrement.

A YouTube video posted earlier this week has amassed a million views in just a few days, and, if the reaction in the FOX 13 Newsroom is any indication, you will either find the ad hilarious or really, really gross.

The ad explains the benefits of the “Squatty Potty” by using a Unicorn pooping out ice cream. The ad is self-aware enough to realize many people won’t be sure if it’s a joke or not, and the narrator even says, “No, Squatty Potty is not a joke. And yes, it will give you the best poop of your life, guaranteed.”

The video explains the pros of pooping while employing the Squatty Potty, but if you can’t stomach the soft-serve jokes the gist is that squatting prevents the kinks in the system associated with sitting, and the result is a healthier route to elimination and can help with constipation and hemorrhoids.

Bobby Edwards is the CEO as well as co-creater and co-founder of the company, and he spoke to FOX 13 News about how the novel video came to fruition.

“But we really wanted to create something that was funny, educational,” he said. “Old Spice, PooPourri, you know, these videos that are funny and they educate you and all that, check all the boxes. So we approached the people that knew that they were doing, the people who had done it before, and they, we, came up with the pooping unicorn concept.”

Edwards said you can’t really show a human in that position, and that by using unicorns and rainbow ice cream they could discuss the topic with visuals that weren’t as off-putting. He also spoke about how he came to find himself in the business of helping people do their business.

“We started Squatty Potty in 2012, and, you know they say necessity is the mother of all invention: Well, my mother was constipated and she had experienced digestive problems pretty much her whole life.”

When someone suggested to his mother that she elevate her feet to help her squat while eliminating, she found those problems cleared up. However, the stool she was using to shape her stool wasn’t the ideal shape, and as she discussed this problem with her son, Edwards resolved to make a better version. Edwards said they perfected the design and even gave a few out to friends and family.

Laughing, he recalls the early reaction: “We gave those out for Christmas one year, as gifts, and people thought we were crazy, like, ‘What is this pooping stool and how does it work?’”

Edwards said modern toilets are efficient and sanitary, but because they require you to sit rather than squat they aren’t ideal. He said Squatty Potty allows you to get back to your roots and enjoy a more effective bowel movement without replacing your toilet.

“We’re actually one of the few countries that don’t squat, the majority of the world squats, two-thirds of the world squat to eliminate, and that’s, you know, the way they go,” he said. “We look at it as being barbaric and uncivilized, when actually, instinctually and anatomically, that’s the way we should be going.”

The Squatty Potty business began in a garage but grew slowly, but a redesigned website and some viral flair helped get the product going. Edwards said initially their messaging was off, but they eventually found the right tone.

“It’s a taboo topic, right, it’s poop,” he said. “And you’re telling people that they’re pooping wrong. And they’re like, ‘No I’m going just fine.’ And unless you have constipation or hemorrhoids or trouble eliminating, you don’t know.”

After improving their marketing, Edwards said they did about a million in sales that next year. He said all of the Squatty Potty’s are built in Utah, either in Logan or Leeds, and are shipped out via Salt Lake City.

Th newest viral video has been a hit, with Edwards saying they’ve done about 250 orders each hour since the video began gaining traction.