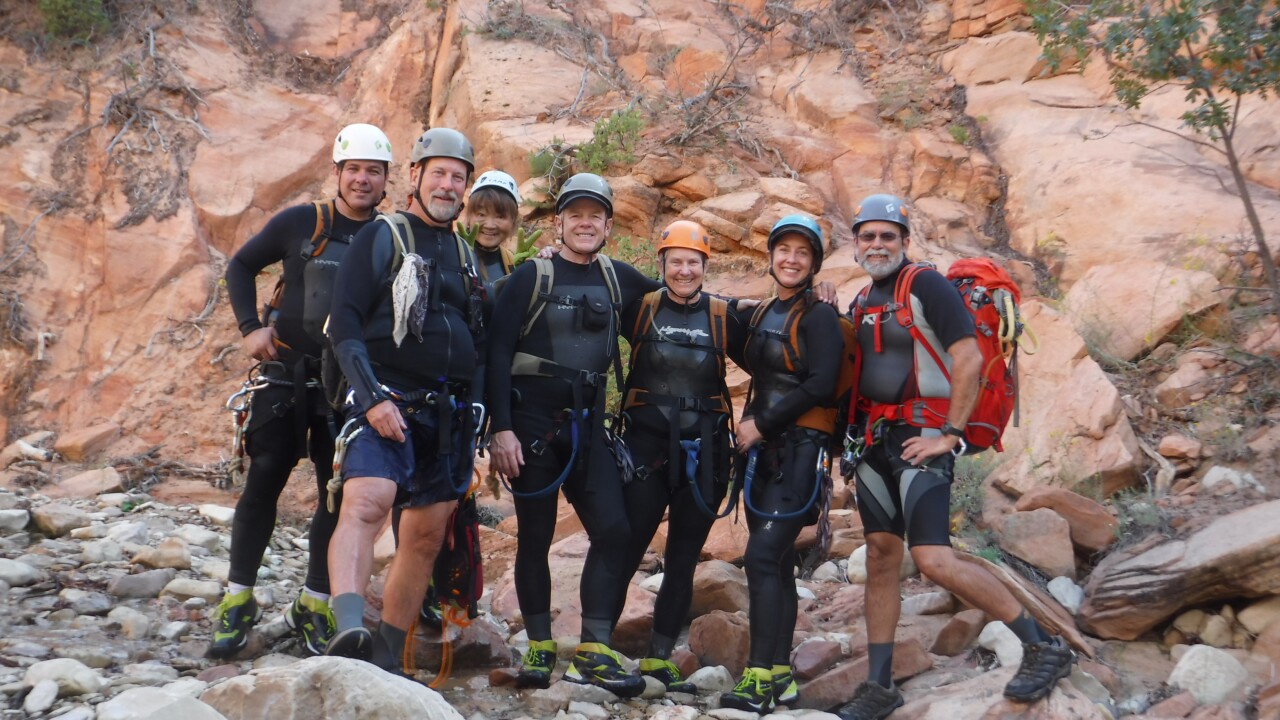 ZION NATIONAL PARK, Utah — Authorities at Zion National Park have identified the seven people who were killed when a flash flood struck Monday while the group was canyoneering in Keyhole Canyon, and they also released a group photo taken hours before the tragedy.

The photo shows the group before the first rappel on the hike that would ultimately claim the lives of each member.

The press release states 60 searchers from multiple agencies contributed a combined 1,135 hours to find the missing people. Combined with the 12 dead and one still missing after flash flooding in Hildale/Colorado City, the event makes Monday the deadliest weather-related disaster to occur in Utah history.

A missing man from Hurricane whose car was located in a flood plain near Colorado City may have also been killed by the flash flooding.

The Arthurs are a married couple and were among the first to be identified, and Thursday an officer who served with Steve in the Ventura County Sheriff’s Office spoke about the loss of their friend.

Zion National Park Superintendent Jeff Bradybough stated: “Our heartfelt sympathies go out to those affected by the flash flooding in Keyhole Canyon. We have witnessed an incredible community of the family members and friends of the canyoneers come together to support one another. The canyoneers along with their families and friends are in our thoughts. The families of the canyoneers extend their deepest gratitude for all of the Search and Rescuers and have also requested privacy during this difficult time.”

The press release states the group picked up their canyoneering permit for Keyhole Canyon Monday at 7:40 a.m.

Park Ranger Therese Picard said earlier in the week that groups are always warned when the weather forecasts rain, but she said since they can’t determine people’s individual ability, it’s up to the visitor to decide whether or not to continue.

Just under seven hours after the permit was issued, around 2:22 p.m., Zion National Park received a flash flood warning from the National Weather Service, which was publicized by media outlets and posted at, “all of the park’s contact stations. Canyons were closed to Canyoneering,” according to the press release.

The release states the seven people entered Keyhole Canyon sometime between 3:30 and 4:30 p.m.

Picard spoke earlier in the week about the difficulty in notifying all visitors of potential weather hazards.

“For folks that have already started their trip, trying to get word to them and also having multiple canyons within this park, it is not possible to contact everybody,” Picard said.

Between 4:30 and 5:30 p.m., Zion Canyon received 0.63 inches of rain in less than one hour, and the flow of the North Fork of the Virgin River rose from 55 Cubic Feet per Second to 2,630 CFS in 15 minutes. The release notes, “River levels this high occur approximately once every three years.”

Around 5:30 p.m., another canyoneering group who had come through Keyhole Canyon before the flood reported to park rangers they had passed the group of seven, and they believed that group may have been caught in the flood.

Park rangers located the group’s vehicles, but did not see any signs of the people. Because Keyhole Canyon was already flash flooding at this time, crews determined it was unsafe to attempt rescue operations.

The search would begin the next day at 7 a.m., though at that time the weather and high water levels meant Keyhole Canyon was still inaccessible, according to the press release.

Still, searchers made verbal calls from near the canyon, and they also searched downstream into Clear Creek, where Steve Arhur’s body was located at about 1:30 p.m. Tuesday.

About an hour later, a private canyoneering group went into Keyhole, where they found the body of Gary Favelu.

At 5:15 p.m., Don Teichner was located in Pine Creek Drainage.

The search ended for the night, and resumed early Wednesday morning. While the “technical sections” of Keyhole and Pine Creek Canyons were not accessible, Robin Brum was located in Pine Creek drainage at 11:15 a.m.

The search continued into Wednesday night and was again paused for the night, resuming Thursday morning. Linda Arthur’s body was recovered at 10:45 a.m. in Pine Creek Canyon.