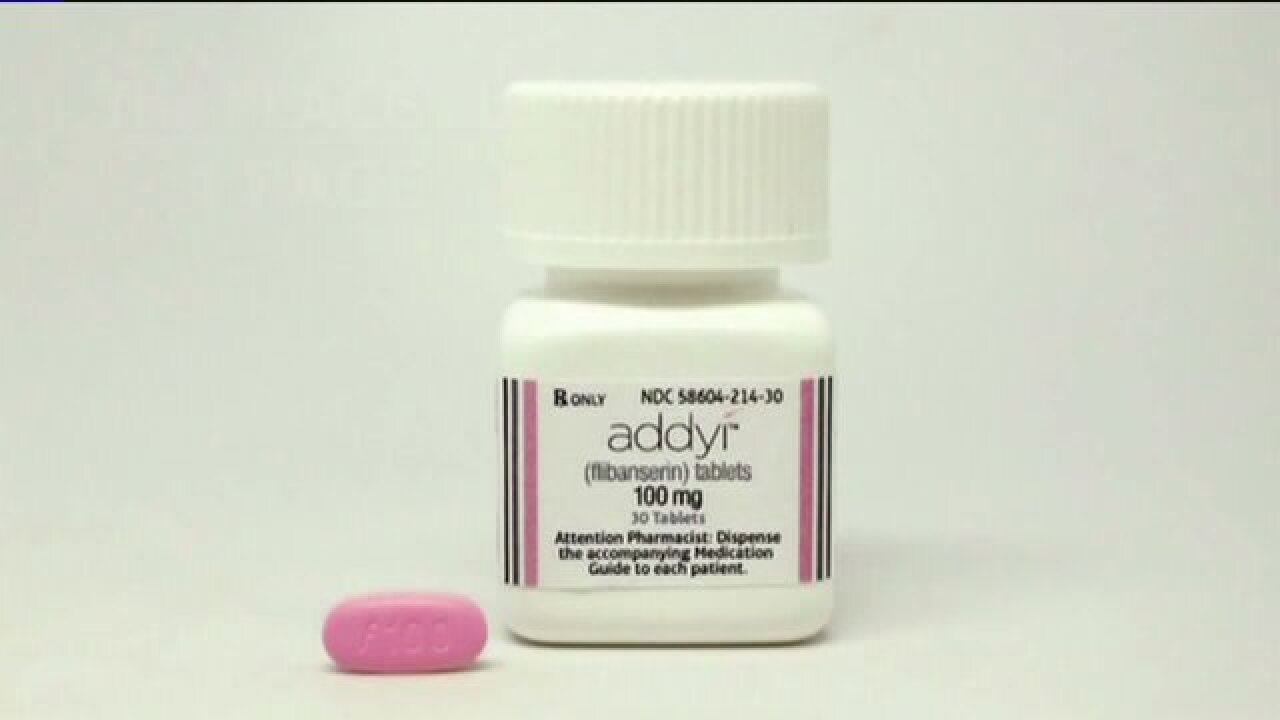 The U.S. Food and Drug Administration has given women who struggle with low libido some hope. The agency approved the first drug to treat hypoactive sexual desire disorder. While there are more than a dozen drugs that help men's sex lives, this is the first that will help women.

Sprout Pharmaceuticals has tried twice to get the drug approved. Doctors can write prescriptions for the pink pill that will be marketed as Addyi in October. The company said it will cost about what a prescription for Viagra does. Many questions have come into the CNN Facebook page. So, let's bust five myths about the pill before it becomes available.

While people are calling Addyi the "female Viagra," it doesn't really work that way. Viagra eliminates a physical problem for men. Men take it to get and keep an erection. They pop it before they want to have sex. Addyi doesn't treat a physical problem for women -- instead it targets the chemicals in their brain and it improves, in at least 37% of the women who take it, their sense of desire for their romantic partner. Women have to take Addyi every night.

2. This will be a cure-all for women not all that into sex

Unlike Viagra, which works for a wide variety of men, Addyi only works on women with a significantly low sex drive. It doesn't turn people on if they aren't already attracted to a person. Low libido is the biggest sexual complaint, according to a 2002 study. For those it helps, such Amanda Parrish, a 52-year-old who was a part of the drug trial, it can be life-changing. She did have a sex life with her husband before she took the drug, but it wasn't fully satisfying. "It was that I lost my drive to initiate [sex] and be an active participant [in sex] and I found myself more of an obligatory participant." Parrish said. "From the neck down my body responds just fine, but from the head up, well, for years people have been telling women it's all in our head and I guess it turns out for some women it really is."

3. This will make women nymphos

"It doesn't make you have hypersexual interest," according to Dr. Anita Clayton. Clayton works as a consultant with Sprout Pharmaceuticals and is interim chair of the department of psychiatry and neurobehavioral sciences at the University of Virginia School of Medicine in Charlottesville. "It's not an aphrodisiac." Instead it helps rebalance the chemicals in a woman's brain to restore their desire for someone to whom they are attracted. Women "saw improvements," Clayton said, but "it wouldn't go beyond normal" and does not give them "a more enhanced sexual interest" overall. Women who were in this study said they were happy even if they just "got close to their normal."

4. This will be something someone could use on unsuspecting women

Even for the women the new drug will help, it doesn't take effect instantly. The drugmaker says it only works over time. It can make women sleepy; it would not incapacitate them like GHB, popularly known as a "date rape" drug, can. A woman taking this libido drug would remain conscious and aware of her surroundings.

5. Women may abuse this recreationally

Because of the serious side effects of low blood pressure and passing out, particularly when women drink alcohol and use the product, women will need a prescription to get the drug. The packaging will include a warning. The women will have to be screened by doctors for sexual dysfunction. "This is not the panacea that Viagra is at all," Dr. Laura Berman said. Berman worked on the drug trial and is an assistant professor of clinical obstetrics and gynecology at Northwestern University Feinberg School of Medicine. Women may still need therapy to address broader relationship issues that may be affecting their interest in intimacy. "Women who don't need a medication won't be taking it unnecessarily," Berman said. "That's why there is a screening process and I know the company takes it seriously."