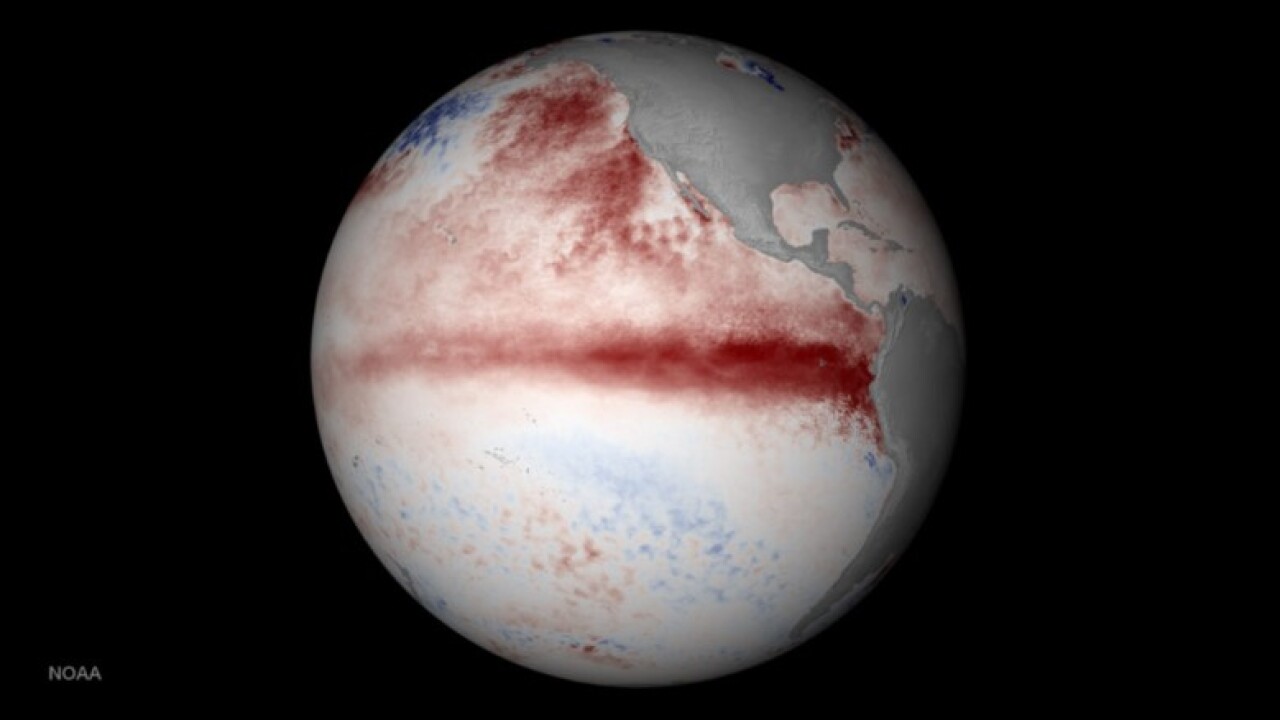 If you don’t know El Niño now, you will soon.

The waters of the eastern Pacific Ocean are heating up, scientists say, building towards a strong El Niño event that could rival the intensity of the record 1997 event that wreaked weather-related havoc across the globe, from mudslides in California to fires in Australia.

According to the latest forecast released Thursday by NOAA’s Climate Prediction Center, this year’s El Niño is “significant and strengthening.”

“There is a greater than 90% chance that El Niño will continue through Northern Hemisphere winter 2015-16, and around an 85% chance it will last into early spring 2016,” the NOAA said in a statement.

The weather phenomenon largely became a part of the public vernacular during the 1997 El Niño. It caused devastating flooding in the western U.S. and drought in Indonesia. It was blamed for deadly virus outbreaks in Africa and rising coffee prices around the world.

Pure chaos. But what is El Niño, and what impact will it have this time around? Let us explain.

What is El Niño and what causes one?

El Niño is a warming of the eastern Pacific Ocean, mainly along the Equator — see the thick red belt in the satellite photo, which indicates waters that are warmer than normal.

These warmer waters are normally confined to the western Pacific by winds that blow from east to west, pushing the warmer water toward Indonesia and Australia.

But during an El Niño, the winds slow down and can even reverse direction, allowing the warmer water to spread eastward all the way to South America.

El Niños occur every two to seven years in varying intensity, and the waters of the eastern Pacific can be up to 4 degrees Celsius (7 degrees Fahrenheit) warmer than usual.

What happens when there’s an El Niño?

A strong El Niño heats up the atmosphere and changes circulation patterns around the globe, especially the jet stream over the Pacific, which becomes stronger and dumps more frequent and intense storms over the western U.S., especially California. It also means more rain for the west coast of South America.

But the atmosphere is somewhat of a zero-sum game. More rain in North and South America comes at the expense of normally rainy Southern Asia and Australia, which become abnormally dry and experience droughts.

A strong El Niño also influences cyclone seasons around the planet. The warmer the East Pacific is, the more hurricanes it gets. The Atlantic Ocean sees fewer hurricanes, however, a result of increased upper level winds that prevent hurricanes from developing, which is why officials are predicting a calm 2015 hurricane season in the U.S.

The Western Pacific, on the other hand, tends to see more and stronger typhoons, which may explain why there have already been 5 super typhoons there in 2015. Normally there’s only one by this point in the year.

The weather isn’t the only thing that’s affected. Warmer surface waters in the eastern Pacific drive away the coldwater fish that are the backbone of the fishing industry in much of Latin America. It was here that the phenomenon was first noticed by fishermen, who named it “El Niño” — meaning “little boy” or “Christ child” in Spanish — since it would often appear around Christmas.

The waters of the eastern Pacific Ocean are heating up, scientists say, building towards a strong El Niño event that could rival the intensity of the record 1997 event that wreaked weather-related havoc across the globe, from mudslides in California to fires in Australia.

The Oceanic Niño Index (ONI) measures sea surface temperatures in the tropical Pacific. Zero is average, positives numbers are warmer, and negative numbers are colder. Anything above 0.5 is considered El Niño conditions — and anything above 1.5 is a strong El Niño.

El Niño then and now — a side-by-side comparison of 1997 and 2015 http://t.co/Ari6AMCGRM pic.twitter.com/aTJvmozwhW

The prospect of a record-breaking El Niño is worrying, given that the 1997 edition created conditions that killed an estimated 23,000 people and caused as much as $45 billion in damage.

Parts of Latin America experienced torrential rain and mudslides. On the other side of the El Niño-fuelled Pacific, Indonesia had a record drought that led to uncontrollable forest fires in Southeast Asia. Thirty-five counties in California — currently enduring a catastrophic drought — were declared disaster areas after rain caused flooding and mudslides.

The world also heats up during an El Niño — 1998 became the warmest year on record at the time, and 2015 is almost certainly set to become the hottest year yet again.

Forecasters are predicting this #ElNiño will be a strong one. What does that mean for the US? http://t.co/KmFjFgvZPu pic.twitter.com/PQ0Gqywhxd

Which areas will be hit the hardest?

Like snowflakes, no two El Niños are exactly alike, and they’re only one of many different large-scale weather patterns acting in tandem to influence global weather. The presence of “the blob,” as it has become known — an area of warmer water in the Northern Pacific — wasn’t there during the 1997 El Niño, which will likely influence the jet stream over North America, meaning this El Niño may not be the drought-buster that Californians are hoping for.

Nevertheless, if El Niño comes on as strong as current projections seem to indicate, we can say with some level of confidence that coastal South American countries will see above average rainfall and flooding over the next 6-9 months, while countries on the other side of the ocean like Australia and Indonesia will likely see drought.

This year’s El Niño could be the biggest on record – here’s what you need to know: http://t.co/wjEYdNYSjV pic.twitter.com/b7YMCEtf0Q

Does climate change have anything to do with it?

The influence of climate change on El Niño is a matter of debate. Some research suggests that while the overall number of El Niños is unlikely to increase, the number of “super” El Niños are twice as likely to occur.

The U.N., for its part, says confidence is low that climate change will affect El Niños in the future. But just because El Niños may not change doesn’t mean their impacts won’t become more severe.

One of the most likely by-products of global warming is more extreme precipitation events, as warmer temperatures can hold more water vapor in the atmosphere. This could make El Niño induced floods even more devastating.