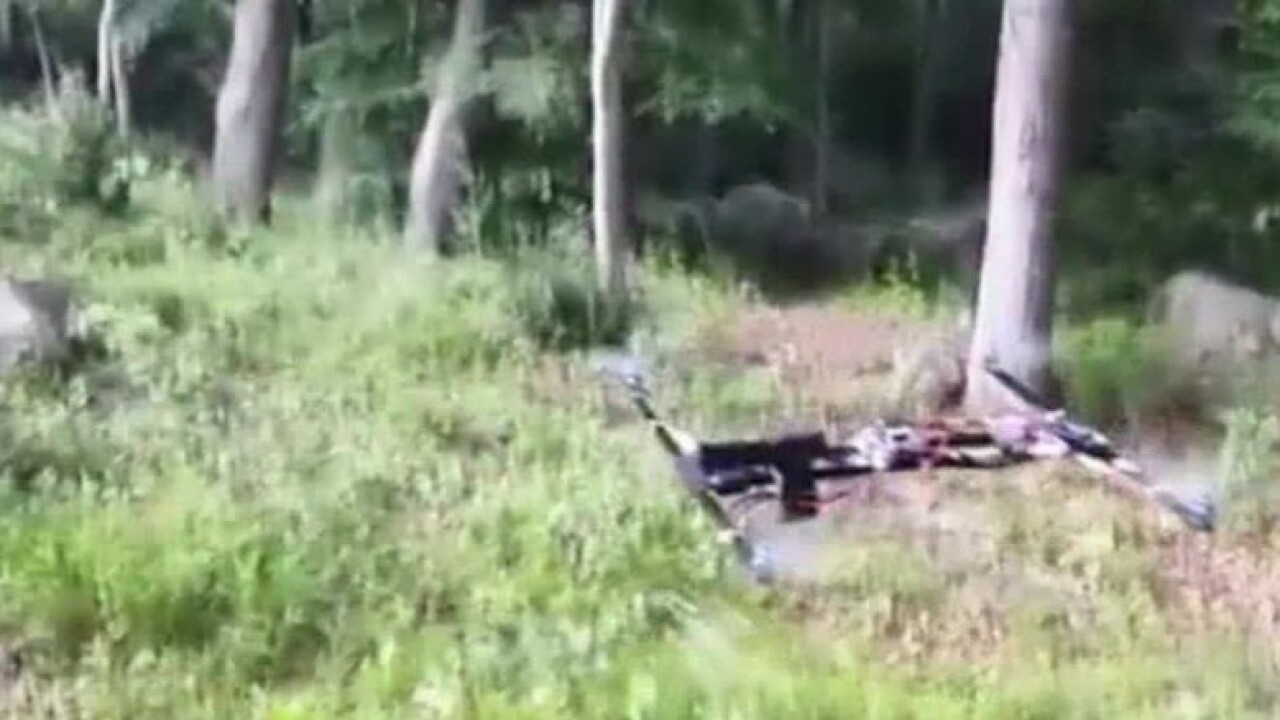 Video of a handgun fired from a hovering drone into a wooded area has been posted on YouTube — where it has gone viral — apparently by an 18-year-old Connecticut student whose father says his son created the drone for a college class.

No one was harmed, nor has the teenager been arrested or charged. Still, the video has stirred fresh debate about the use of, and dangers posed by, drones.

While armed unmanned aircraft have long been in the government’s arsenal in targeting terrorists in distant lands, the idea of someone being able to fire bullets or other dangerous projectiles on a remote controlled flying object over the United States is something else entirely.

The gun drone in Connecticut appears to have been fired on private property and — so far, authorities said — it did not appear any laws were broken. There were no complaints from neighbors until after the “Flying Gun” video went viral with almost 2 million views as of Tuesday, authorities said.

“It appears to be a case of technology surpassing current legislation,” police in Clinton, Connecticut, said.

Nevertheless, authorities said they are investigating whether any laws or regulations could have been broken when the handgun drone fired four shots on the wooded grounds of the 18-year-old student’s residence in Clinton, authorities said.

“We are attempting to determine if any laws have been violated at this point. It would seem to the average person, there should be something prohibiting a person from attaching a weapon to a drone. At this point, we can’t find anything that’s been violated,” Clinton Police Chief Todd Lawrie said.

“The legislature in Connecticut (recently) addressed a number of questions with drones, mostly around how law enforcement was going to use drones. It is a gray area, and it’s caught the legislature flatfooted,” the chief said.

“As luck of the draw goes, Clinton, Connecticut, got to be the test site,” he said.

The Federal Aviation Administration and federal law agencies are also investigating “to determine if there were any violations of criminal statutes,” the FAA said.

Drones with missiles are commonly used in U.S. strikes against terrorists overseas, though some say the program has loose oversight and too many civilian casualties. Up to now, U.S. law enforcement hasn’t had to deal with such armed drones. But there have been issues with unarmed drones flying elsewhere, from over the White House to into the middle of wildfires.

California firefighters recently complained of (unarmed) drones near wildfires that can prevent helicopters from water drops, including at a spectacular wildfire on Friday that struck a Los Angeles freeway, torching cars and sending motorists fleeing on foot.

Presumably, those drones took video of the disaster.

In response, two California lawmakers introduced legislation Monday that would allow firefighters to use “jamming” technology to down the drones. The proposal would protect firefighters in cases where they damage drones and impose possible jail time for the drone operators who interfere with firefighting.

In Connecticut, the handgun drone was used and fired at the residence of Austin Haughwout, 18, of Clinton, police said.

“I don’t believe he was up there flying this thing all the time,” Lawrie said.

Haughwout and his relatives could not be reached for comment by CNN on Tuesday.

But Haughwout’s father told CNN affiliate WFSB that his son made the handgun drone with his professor at Central Connecticut State University as part of a project.

The father, who wasn’t named by the outlet, said his son made sure he wasn’t breaking any laws, the affiliate reported.

A university spokesman didn’t respond to requests for comment Tuesday.

Law enforcement analyst Tom Fuentes, a former director of the FBI, said he believed the gun drone could be illegal as a form of reckless conduct.

“What if the drone gets beyond the distance of the radio control? We had that drone land on the front lawn of the White House,” Fuentes said. Earlier this year, a U.S. intelligence agency employee lost control of a borrowed personal quadcopter drone, which crashed on the White House lawn.

“Do we want drones out of control that could land who knows here? We could have a child pick up the drone, pick up the gun, and accidentally kill themselves. I see the whole thing as reckless conduct,” Fuentes said.

Legislators should address the placement of any weapon or hazardous material on unmanned aircraft, Fuentes said.

“With a conceal and carry permit, you are responsible for that firearm. With a drone, it’s out of your control and someone could get their hands on it — that’s extremely dangerous,” Fuentes said.

“This is maddening and I can’t believe that hobby drones are risking people’s lives to get videos on YouTube,” Gaines said in a statement. “Drone operators are risking lives when they fly over an emergency situation.”

Said Gatto: “This legislation is the equivalent of the ‘no parking in front of a fire hydrant’ rule for the age of democratized aviation.”

The proposed law comes after an incident in which several drones apparently prevented California firefighters from sending helicopters with water buckets for up to 20 minutes over a wildfire that roared Friday onto a Los Angeles area freeway that leads to Las Vegas.

Fire helicopters were grounded out of a concern that a midair collision with a drone could threaten the lives of the pilots and anybody below, authorities said.

In last week’s wildfire, the FAA imposed a temporary flight restriction, which banned any private aircraft or drone in the area, the FAA said.

Under such a restriction, the agency could impose civil fines ranging from $1,000 to $25,000 if someone operates a drone in a dangerous manner or continues to operate one illegally after being contacted by the FAA, a spokesman said.

The North Fire burned 4,250 acres in and around the Cajon Pass on Interstate 15 and destroyed two semis and 18 vehicles, authorities said. Ten more vehicles on the freeway were damaged. No injuries were reported, authorities said.

In the community of Baldy Mesa the fire destroyed seven homes, 16 outbuildings, and 44 vehicles, authorities said, and damaged a home and four more outbuildings.