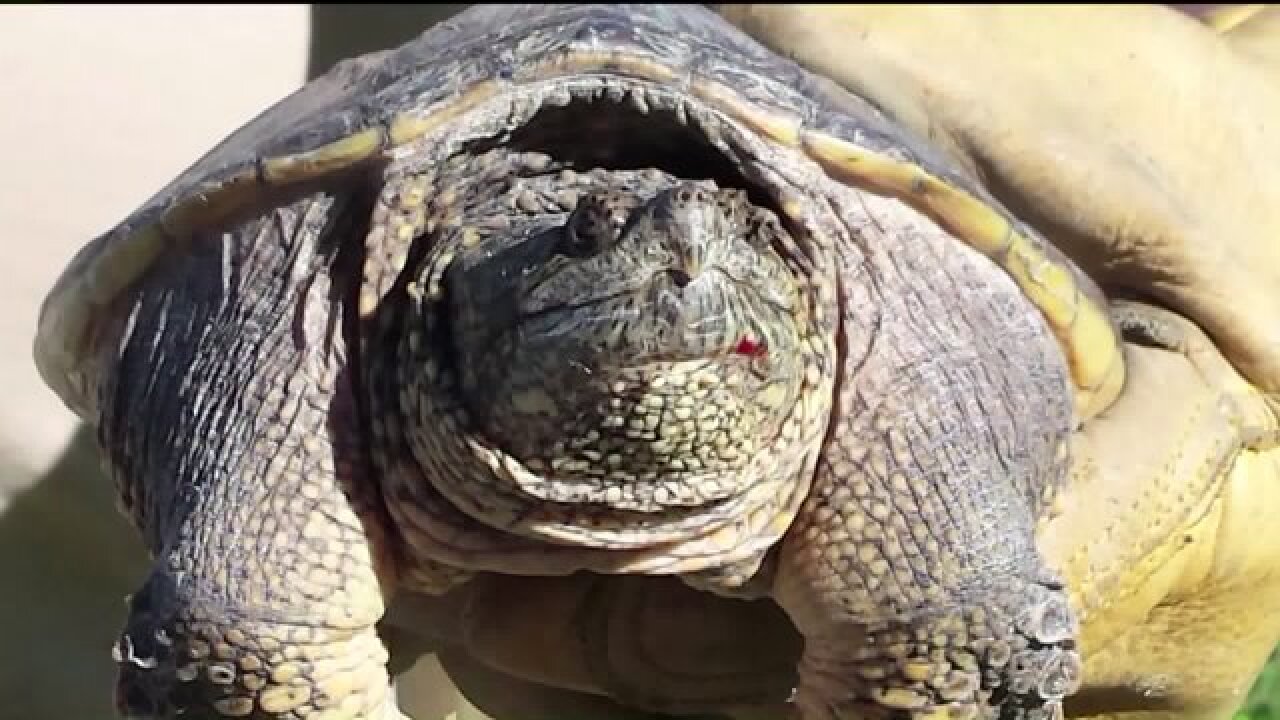 OGDEN, Utah -- The Weber River is a fun place to cool down on a hot summer day, but wildlife officials are warning people to look out for some unwanted guests: snapping turtles.

In the past week, two snapping turtles, weighing about 20 pounds each, have been found in neighborhoods near the Weber River.

And while turtles aren't as dangerous as mountain lions, wildlife officials and the people who found them said kids are especially fascinated by them and may not understand how hazardous they are.

“It's not something that's native to Utah, so we didn't want to see somebody getting hurt approaching one of these turtles thinking, ‘Oh, this is cool,’” said Phil Douglas of the Utah Division of Wildlife Resources.

Last week, Heath Gilbert's kids thought it was cool when a snapping turtle wandered onto the front lawn of their home, three blocks away from the Weber River.

“My son was out mowing the lawn, and it was in his way,” Gilbert said.

“It would hiss and just kind of act aggressive, and when I tried to move it, it definitely didn't like that,” Gilbert said.

Douglas said snapping turtles are known to act that way.

“They can get agitated, they can be vicious,” he said.

Douglas said they suspect the specimen that surprised the Gilberts was just one of many turtles that have made themselves at home here.

“We do believe that there's a breeding population that exists in the river,” Douglas said.

He said he suspects snapping turtles were released into the river years ago by someone who grew tired of caring for them at home.

“They do not make good pets,” he said.

A mature snapping turtle is capable of tearing skin and breaking fingers and toes.

“They're very distinctive,” Douglas said of the species. “They have a large hooked snout on them. They have very large claws... It's something that concerns us from a public safety standpoint, but also from an ecological standpoint; We don't want to see them in the system."

The Department of Wildlife Resources doesn't have anywhere to keep the turtles long-term, and there may be many more to be removed from the ecosystem of this river, so at this point any turtles found are being euthanized.

If you see a snapping turtle, the Division of Wildlife Resources says you shouldn’t touch it. Instead, just call them so they can come and get it. Visit the DWR’s website for more information and contact details.

You can also find information on wildlife safety by visiting Wild Aware Utah.