Governor Herbert decries same-sex marriage ruling, but calls for all sides to work together 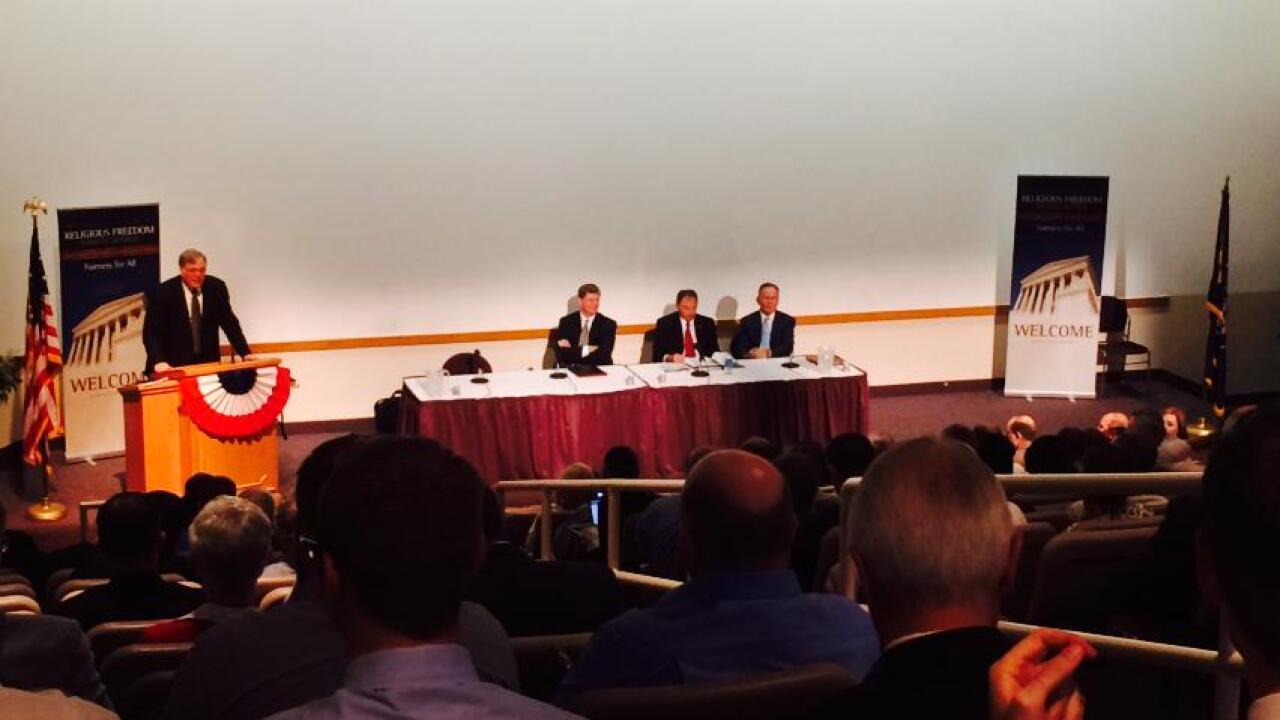 Governor Gary Herbert and Sen. Stuart Adams speak at a conference on religious freedom at BYU on Wednesday.

However, Utah's governor also called for people of all sides to work together on issues involving religious liberties. Speaking at Brigham Young University on Wednesday, Gov. Herbert said no one understands the nexus of religious freedom and discrimination quite like Utah -- pointing to Mormon pioneers' history of persecution.

The governor also noted the irony of Utah becoming a state by abandoning the practice of polygamy.

"We, ironically so, could not become a state until we defined in our constitution marriage as being between one man and one woman," he told the crowd.

"The law has been settled with regards to same-sex marriage," Herbert said. "But will it have negative implications?"

Governor Gary Herbert and Sen. Stuart Adams speak at a conference on religious freedom at BYU on Wednesday.

Throughout his speech and in remarks to reporters afterward, the governor pushed compromise and collaboration (even when some attendees suggested he had compromised too much). He declared himself "probably the most conservative governor Utah has had since Brigham Young," but added: "I am moderate in tone."

Speaking to FOX 13, Gov. Herbert acknowledged there would likely be some legislation reacting to the U.S. Supreme Court's decision -- but he hoped it would not upset the compromises reached between faith communities and the LGBT community on nondiscrimination in housing and employment.

Asked if he would support a RFRA (Religious Freedom Restoration Act), Herbert said it would depend on what is presented and insisted that it would have to involve collaboration.

"I'm concerned about protecting religious rights and also ensuring against discrimination," he said.

Asked about laws dealing with public accommodations, including wedding cake bakers, Herbert seemed reluctant to engage in the debate: "We don’t have to have a law to tell us to be good people."

"I understand the concern of the cake maker who says I don’t want to provide to a gay wedding," Herbert said. "At the same time, you’re offering yourself up to the public square. It does seem a little untoward to say, 'I’m going to pick which sinner I’m going to serve.'"

The governor said he did not support any bill that would attempt to get the state out of the marriage business.

"This idea of taking the ball and going home, doing away with marriage altogether, I don’t think that’s’ the right approach to take," he said.