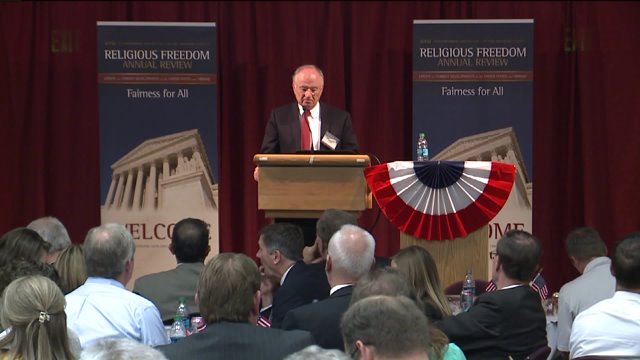 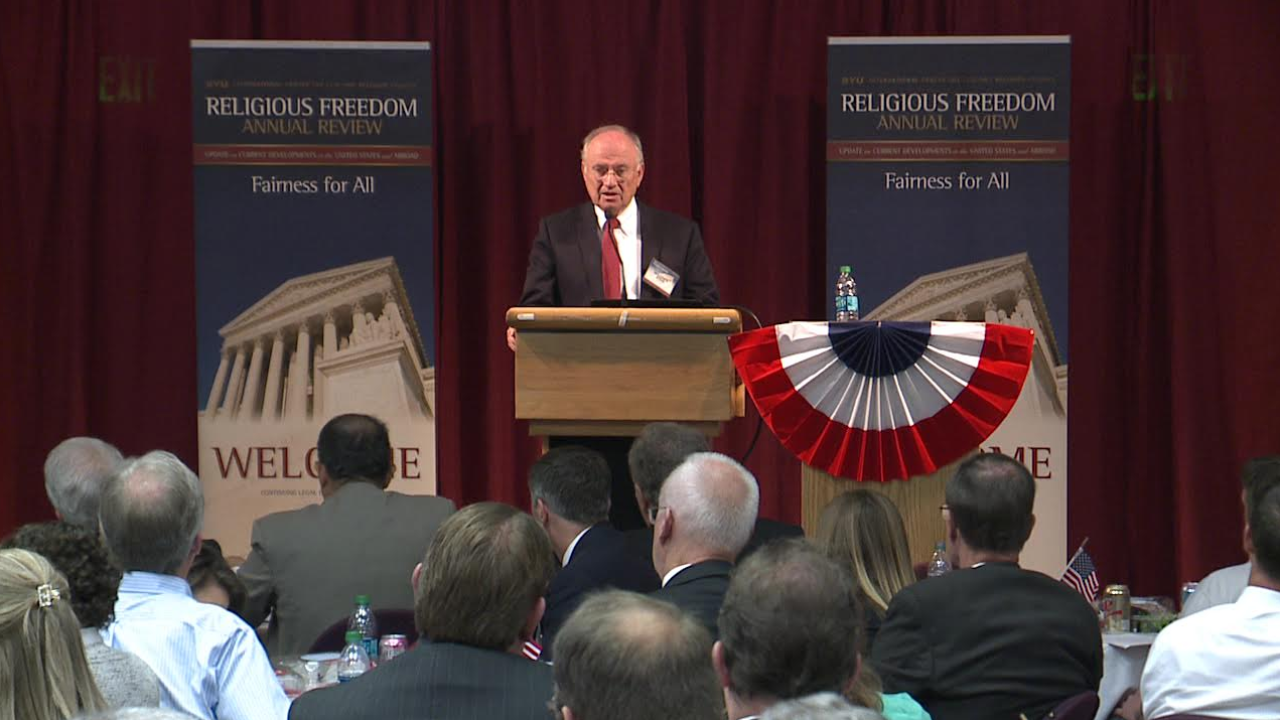 PROVO, Utah -- In the aftermath of the U.S. Supreme Court's historic ruling on same-sex marriage, scholars, lawyers and activists gathered at Brigham Young University to discuss ways to preserve and ensure religious freedom.

"I think you're going to see a rapid development in erosion of religious freedoms," said William F. Atkin, associate general counsel for The Church of Jesus Christ of Latter-day Saints.

Reacting to the court's ruling on same-sex marriage, Atkin told a crowded room on Monday that "the same-gender marriage discussion was not the end." Rather, he said, it was likely the beginning and he urged Mormon faithful to "be prepared as we look into the future."

William F. Atkin, associate general counsel for The Church of Jesus Christ of Latter-day Saints, speaks at a conference on religious freedom Monday at BYU.

Others at Monday's conference said there were alternatives.

"(The sky is) not going to fall," said Robin Wilson, a professor at University of Illinois College of Law. "But there are better or worse ways to do things."

Wilson, who worked with Utah lawmakers and LGBT rights activists to craft compromise legislation earlier this year on nondiscrimination in housing and employment and a bill that let clerks opt out of performing same-sex marriages, said the state has already taken steps to safeguard religious liberties.

"In a place like Utah, you were ahead of the curve," she told FOX 13. "That's an important place to be."

Wilson said Utah made sure all interests were looked at in its legislation.

It's a point of pride for Senate Majority Whip Stuart Adams, R-Layton, who drafted the nondiscrimination bill with the involvement of gay rights groups. He said all sides can come together and respect each other's views.

"If there isn't a balance, we've got a problem," he said in an interview with FOX 13.

The Utah State Legislature is expected to take up some bills in reaction to the U.S. Supreme Court's marriage ruling. One bill that is purportedly in the works would get the state out of the marriage business altogether. The bill is protected, meaning its content and sponsor are not being revealed.

Adams called that bill "the wrong way to go." Wilson said she believed it would be "disastrous," because of so many laws tied to marriage.

"It's beneath the dignity of us as a people, if you lose on a great fight like marriage -- whatever you thought of it -- to now say, 'We're going to shut out access to marriage.' I think we're better than that," Wilson said. "I think what Utah did was demonstrate you can, in fact, be deeply divided over a religious question like marriage and still find a way forward where everybody lives together in peace."

Wilson said she believed states should not be the "choke point" on marriage and block any couple from getting a license, but also supported protections for faith-believers. She said Utah found a way around it with its bill dealing with county clerks being able to opt out -- so long as someone is available to perform the marriage (the elected clerk being the last resort).

"This is the happiest day of your life. It's the most meaningful commitment you will make... and then someone got to tell you their private views of your marriage? Not cool," she said. "We want to avoid what I call 'point of contact refusals.'  We don't want that to happen. So getting in front of things, making people declare, having processes that bypass all this question of religious objectors, that's the way we want to go and it can be done."

"No church will be forced to marry a couple outside of their faith. But religion should never be used as an excuse to discriminate against minorities," said Equality Utah Director Troy Williams. "Religious individuals doing business in the public sphere should not be allowed to put up storefront signs that say, 'No gays served here.' That is not the kind of America where any of us would want to live."

Sen. Adams said no legislative direction has been chosen on the issue of public accommodations for LGBT people but he told FOX 13: "we're looking." He said he wanted to include all in the discussions.

"We're trying to decide what's the right thing to do. Whatever we do, fairness for all, balance, trying to treat people with compassion and respect," he said. "That's got to be the way going forward."