What’s behind increase in shark attacks off the Carolinas? 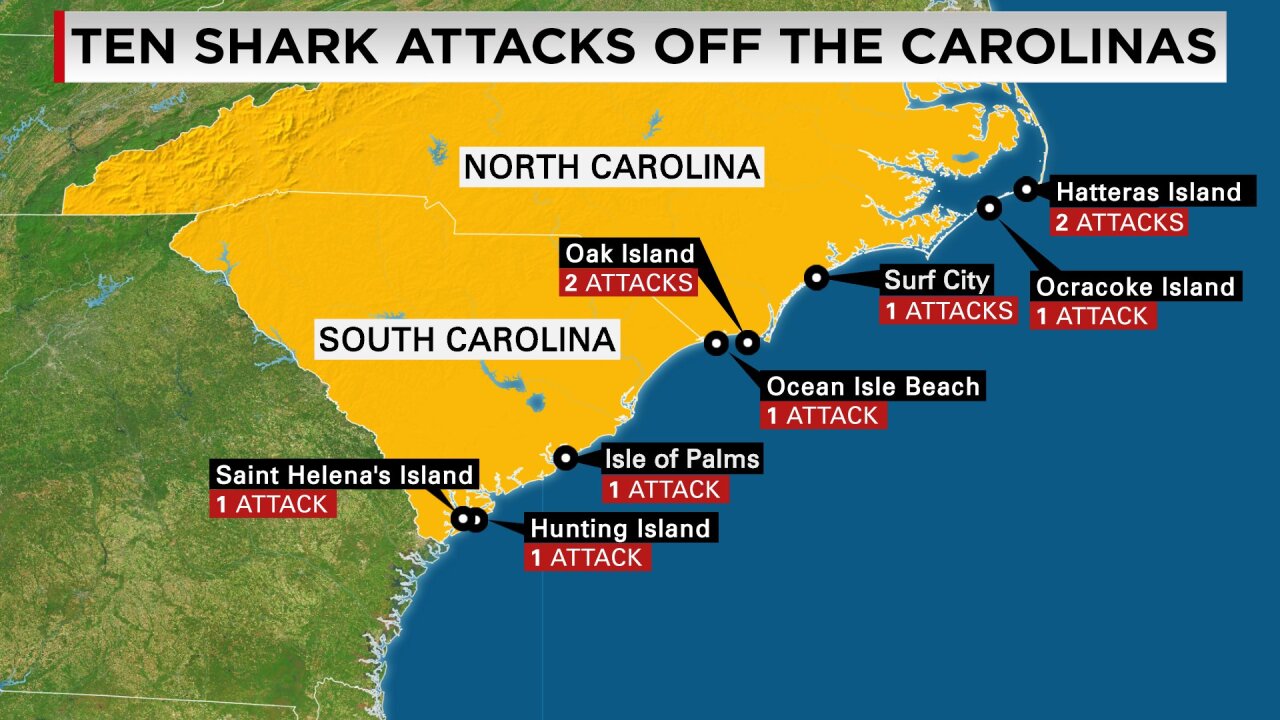 This map details ten shark attacks off the coast of North and South Carolina in 2015. This map is current as of July 2, 2015, showing the latest attack in Ocracoke Island. Credit: CNN

(CNN) — Sharks have attacked 11 people off the coast of North and South Carolina this year, according to the International Shark Attack File at the University of Florida, including a man bitten Wednesday on the Outer Banks’ Ocracoke Island.

That’s higher than the average of six attacks a year off the coasts of those two states.

What’s behind the increase?

A number of factors could be contributing to the apparent rash of attacks, such as warmer water and drought conditions, said George H. Burgess, director of the Florida Program for Shark Research at the Florida Museum of Natural History.

Drought conditions reduce the amount of freshwater making it to the sea, which creates an environment along the shore where higher salt levels attract more fish and sharks, Burgess said.

Warmer waters have sharks in North Carolina ahead of schedule, which is a recipe for more attacks. At Oak Island, North Carolina, two teenagers were bitten 90 minutes apart on June 14.

Burgess said people are going to the beach in higher numbers, now that school is out for the summer.

“This is a situation that we can’t ignore, as we’ve had a number of attacks that are serious within a short period of time,” he told CNN’s “Anderson Cooper 360°” on Wednesday night.

“There’s something going on there, there’s no doubt about that. It’s a perfect storm of environmental and biological variables as well as human activity,” Burgess said.

But in a column Thursday for CNN.com, he warned against overstating the threat of shark attacks.

A shark attacked a man in his late 60s Wednesday on Ocracoke Island in what was the seventh such incident in North Carolina this year.

The Boston Herald identified the man as the paper’s former editor-in-chief, Andrew F. Costello. The paper’s website said he was in fair condition at Vidant Medical Center in Greenville, North Carolina, with wounds to his rib cage, lower leg, hip and both hands.

The man was swimming outside the first breaker when he came upon a 6- to 7-foot gray shark, according to Sarah Johnson, spokeswoman for Hyde County.

The shark pulled the man underwater, biting his rib cage, hip, lower leg and both hands, she said. The man was conscious and talking when he was flown to the hospital for treatment.

“There was a big trail of blood from the water to the sand,” witness Stephen Lee told CNN.

A day earlier, a 12-year-old boy was bitten in the leg while swimming in knee-deep water off Isle of Palms, South Carolina. The injury required eight stitches, according to CNN affiliate WCBD.

Survivor: ‘Only here by the grace of God’

Patrick Thornton of Charlotte — one of North Carolina’s seven attack victims — was swimming late last week in Avon, in the Outer Banks, with his son and others when a shark came up on them.

“I started shouting: ‘Shark! Shark! Everyone out of the water!’ At the same time, I’m punching the shark trying to get the shark away from me,” he told CNN on Thursday. Thornton suffered wounds to the leg and back.

Thornton thanked the first responders who took care of him before he was airlifted to a hospital for treatment.

“The next vacation I take is going to be in the mountains, not the beach,” he said. “I’m only here by the grace of God.”