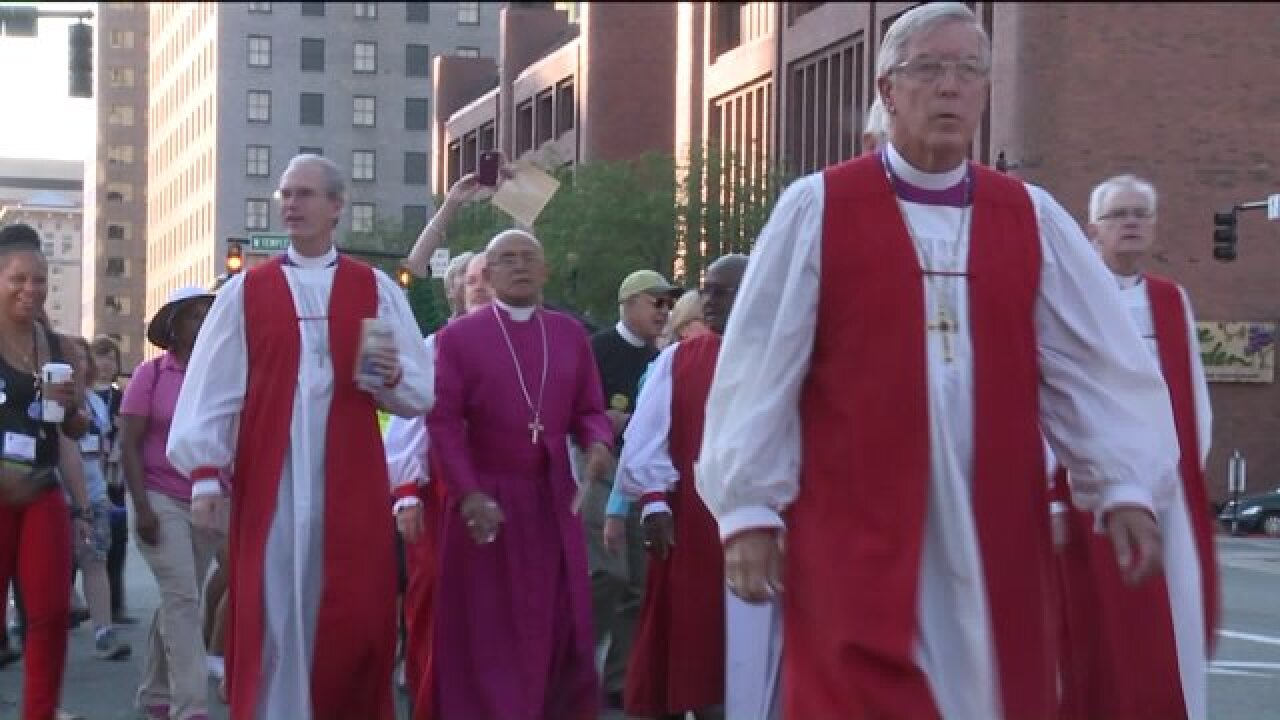 They are calling for the U.S. government to enact stricter laws for the purchase and possession of firearms.

Salt Lake resident Carolyn Tuft was one of the victims of the Trolley Square Mall shooting in 2007. She was shot multiple times and then watched as her attacker fatally shot her 15-year-old daughter in the head.

“I have a story that needs to be heard,” said Tuft, who addressed the crowd at Sunday’s event. “I want to try to make a difference in this American problem and hopefully prevent other people from going through what I go through every day.”

Tuft joined members of the Episcopal Church Sunday morning as they peacefully marched through the streets in downtown Salt Lake City.

“We’ve got to do something about gun violence, and I believe the Episcopal Church is charged, at this particular moment, to lead the way for change of heart, because we are a church that believes in putting our faith in action,” said Gayle Stewart, a deacon of the Episcopal Church in Washington.

As part of their convention in Salt Lake City, the bishops led the march with members of their congregations.

“We have to stop this epidemic,” said Eugene Sutton, a bishop from Maryland. “So we’re here for common ground, for people across the divides of political identification, liberal, conservative, rich, poor, black, white - we’re all coming together to say we can put an end to this gun violence.”

They marched between the northwest corner of the Salt Palace Convention Center and Pioneer Park. Bishop Jeffrey Lee from the Chicago congregation says more people are calling for gun law reform after the country has been plagued by numerous mass shootings and violent attacks.

“As I read the polling numbers, a clear majority of people in the United States want sensible gun registration policies,” Lee said. “It’s remarkable to me that, in many places, it’s easier to buy a gun than a car.”

In a statement to Fox 13 News, Rep. Curtis Oda, R-Clearfield, who actively supports gun carrying legislation, says while members of the Episcopal Church’s intentions are good, he believes it is the strictness of gun laws in South Carolina that helped the shooter to take innocent lives.

He says, in part: “Anti-gun laws actually plays into the hands of criminals. It argues that laws will stop bad people from committing their ill deeds, when in fact, they only restrict law-abiding citizens. Bad people simply ignore laws.”

The Episcopal bishops are asking members of their congregation to work with their legislators to enact stricter laws for gun possession and licensing.

“We can gather people of good will together into a common sense conversation about measures that may be available to us to do something instead of just read about it in the paper,” Lee said.