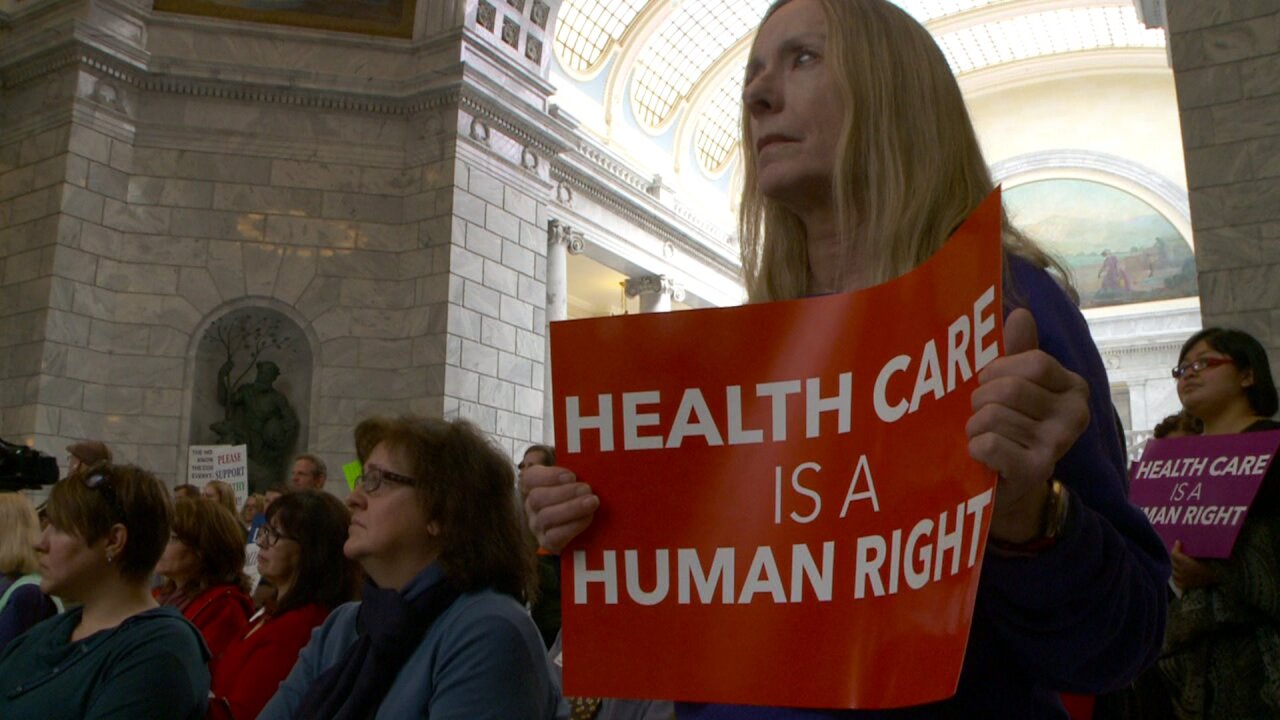 SALT LAKE CITY -- The U.S. Supreme Court's decision on Obamacare is going to have a significant impact on Medicaid expansion negotiations still under way in Utah.

State lawmakers have been waiting for the ruling, while trying to negotiate with Governor Gary Herbert over how to do it. During the legislative session, the Governor and the House had been deadlocked over whether to accept his "Healthy Utah" plan, or a lesser plan some lawmakers preferred but claimed was more financially sustainable.

The governor and lawmakers have been in negotiations for months, even visiting Washington D.C. to speak with Health and Human Services Secretary Sylvia Burwell. But some in Republican House leadership wanted to wait to see what the U.S. Supreme Court decided before moving ahead with any plan.

On Thursday, a 6-3 vote by the Supreme Court justices gave them the answer.

Governor Herbert wasn't exactly thrilled with the ruling, writing in a statement:

“I am very disappointed in the ruling from the Supreme Court this morning. Unfortunately, it appears the plain meaning of the text of the law no longer matters to the court. I have said from the beginning, the Affordable Care Act is flawed. Ultimately, we are a nation of laws and I will continue to work diligently to maximize state flexibility within the legal parameters. We must ensure federal tax dollars Utahns pay under this law provide optimal benefit to our state. I will continue to strongly support Republican efforts at the federal level to repeal and replace Obamacare with policies that provide access while addressing the rising costs of healthcare.”

Still, a spokesman for the governor told FOX 13 it could spur on the discussions with House and Senate Republican leaders over coverage for the poorest in Utah.

"While we’re disappointed with the decision from the Supreme Court, if you’re looking for that slight silver lining, it’s that at the very least, we have some clarity in the framework in that discussion so we can continue to move forward," said Marty Carpenter.

"I think Governor Herbert did win," he told FOX 13. "I think he had taken from the hands from some of the Republican leaders in the House, a stick they were using to hopefully beat Healthy Utah with. That stick is now gone."

House Speaker Greg Hughes, R-Draper, was not pleased with the Supreme Court's ruling. In a statement to FOX 13, he wrote:

“Today’s U.S. Supreme Court decision is both disappointing and destructive. Obamacare has fundamentally failed the taxpayer and many of the Americans it purports to help. This administration’s damaging healthcare policy continues to undermine real insurance markets and drive up the cost of healthcare, resulting in less access to care for many of our nation’s most needy.

“Today’s Supreme Court decision allows the Obama Administration to ignore the law. Here in Utah, we follow the law and we balance our budget. Obamacare has forced states to make up for the failures of this poorly designed federal legislation. The Utah House is committed to caring for Utah’s uninsured in an effective and sustainable way, and today’s ruling in no way changes that effort. We remain dedicated to finding a fiscally responsible and meaningful solution to the obstacles created by Obamacare.”

In an interview with reporters on Thursday, Hughes said of the ruling: "You play the hand you're dealt."

He rejected the idea that anyone lost bargaining power, and said the ruling was essentially the status quo. He told FOX 13 that while negotiations would become more aggressive now, they were not likely to make a self-imposed July 31 deadline. Rep. Hughes said he hoped for a deal by the end of the summer.

"Whatever decision we make, we want to mitigate the risk to the state and how we budget and we want to have sustainability," he said.

Advocates for the poor hope the decision forces lawmakers to reach some agreements and begin providing coverage for as much as 14 percent of the state's population that is uninsured.

"We have all the hope in the world that this will mean a breakthrough," said Barbara Munoz with the Community Action Partnership of Utah. "This is maybe the last thing that’s holding them up from a decision."

Politicians and advocacy groups also weighed in on the decision in a series of statements. Here are some FOX 13 has received:

“Obamacare has been a series of broken promises from the start. From skyrocketing costs to less access to care and more bureaucratic control of the healthcare system, the President’s law has failed patients and taxpayers.  And, unfortunately, absent a cooperative President, the negative consequences of Obamacare will continue.  The American people deserve better.”

“Fortunately, Republicans have a plan to reverse this course by repealing and replacing Obamacare with reforms that put patients – not Washington – first.  Moving forward, we will continue to seek input on our legislative proposal – the Patient Care Act – and use every opportunity available to give both states and patients more freedom and flexibility. We will continue to work toward real reform that lowers costs and helps Americans access high quality healthcare. By putting patients first, we will end the negative consequences of Obamacare and implement policy that is good medicine for American families.”

"I’m extremely disappointed in the Supreme Court’s ruling today, and agree with Justice Scalia that 'words no longer have any meaning.'

"The Supreme Court has chosen to disregard the plain language of the statute in favor of the Obama Administration. They have also chosen to disregard the harmful impacts of the law on Americans. I have heard so many personal stories from my constituents about how they’ve lost their trusted doctors, lost their health care plans and seen their premiums increased due to Obamacare. While undoubtedly some people have benefitted from the law, its overall impact appears overwhelmingly harmful to the U.S. healthcare system."

"Today’s Supreme Court announcement does nothing to lessen my resolve to replace Obamacare with a more patient centered health care plan.  I remain convinced that Obamacare must be replaced with a plan that empowers patients by taking the government out of their health care choices and lowers costs by enabling the free market. I’m proud to be a co-sponsor of the Empowering Patients First Act, which does all of these things and I continue to push for its passage."

"It is time for Utah to act. There are no more 'red herrings' to fish out. The decision has been made. The Affordable Care Act has provided accessible health coverage to so many Utahns, and now it is time to insure many more. Medicaid Expansion has been successful in neighboring states like Arizona, Colorado, and New Mexico. Let’s replicate that success. At the very least, let’s pass Healthy Utah and support those 128,000 of our friends and neighbors. Let’s make sure our families are healthy and supported. Let’s follow through on our promise by making Utah more fiscally sound, more apt to grow, with a healthy and happy population."

"Now we can move forward with a Utah solution to the coverage gap by providing quality and affordable healthcare coverage for the tens of thousands of working Utahns who are still uninsured after today's decision. Solving Utah's coverage gap problem by the legislature's July 31st deadline is now more achievable with the Supreme Court case behind us."

"The Court’s decision today offers no relief to Obamacare’s many victims,” said Utah State Director Evelyn Everton. “For far too long, Obamacare’s burdensome taxes and mandates have wreaked havoc on American families and businesses. This law was hurting people yesterday, and will continue to do so tomorrow.

The Supreme Court may have affirmed that the Obamacare Exchange is here to stay, but now some want to make it even worse by bringing more Obamacare to Utah through Medicaid Expansion. It’s a risky proposal that would spend up to $328 million taxpayer dollars and could mean tax increases, cuts to education ... or both.

Americans for Prosperity Utah will continue pressing Congress to provide relief from the law’s expensive mandates, and continue fighting for patient-centered reforms that work."

The U.S. Supreme Court had an opportunity today to reinforce that America is a nation governed by laws, not by powerful men and women. Sadly, it chose to abdicate that principle in favor of legal sophistry.

In the court's other major ruling on the ACA, NFIB v. Sebelius, the court stated clearly it does not have the expertise to make judgments regarding public policy – but the King v. Burwell ruling relies wholly on judgments regarding public policy to justify its conclusion that the plain language of Obamacare cannot mean what plaintiffs argued it meant.

Such clear contradictions in reasoning undermine the credibility of the court for the average, commonsense people it relies upon for legitimacy.

Not surprisingly, supporters of Medicaid expansion are spinning the court's ruling into justification for expanding Medicaid under the rules of Obamacare. This, of course, is nonsense. The court's ruling simply maintained the status quo, and therefore all of the problems of Medicaid expansion that existed prior to the ruling - helping the uninsured on the backs of Utah's most vulnerable, relying on unsustainable funding  better ways to help Utah's uninsured.

Obamacare remains a poorly written law in drastic need of reform. It has failed to stop dramatic increases in health insurance premiums; it has failed to lower out-of-pocket health care costs for most enrollees; it has failed by putting the interests of Big Business above those of individuals and families; it is an unsustainable policy solution; and it is an unworkable policy for states across the country. Moving forward, we hope that current and future presidential administrations and elected officials from Utah will put real solutions for real people above ideological agendas and political gain in the domain of health care policy. Americans and Utahns deserve no less.

“Tonight, 86,000 Utahns will go to sleep knowing conservative attempts to take away their health coverage have been thwarted yet again. The Supreme Court protected the right of millions of Americans to access affordable health coverage today, and it’s time for our state legislature to do the same by passing and implementing Medicaid expansion in Utah.

“Utah Democrats support the Affordable Care Act as the law of the land; but most importantly, we support Utahns, who deserve the right to quality, affordable healthcare. Now that the King v. Burwell decision has been made, our state legislature has run out of excuses to avoid passing Medicaid expansion. We urge our state lawmakers to work for the health and well-being of all Utahns by passing the Healthy Utah compromise as soon as possible.”