South Carolina Confederate flag back in the spotlight after massacre 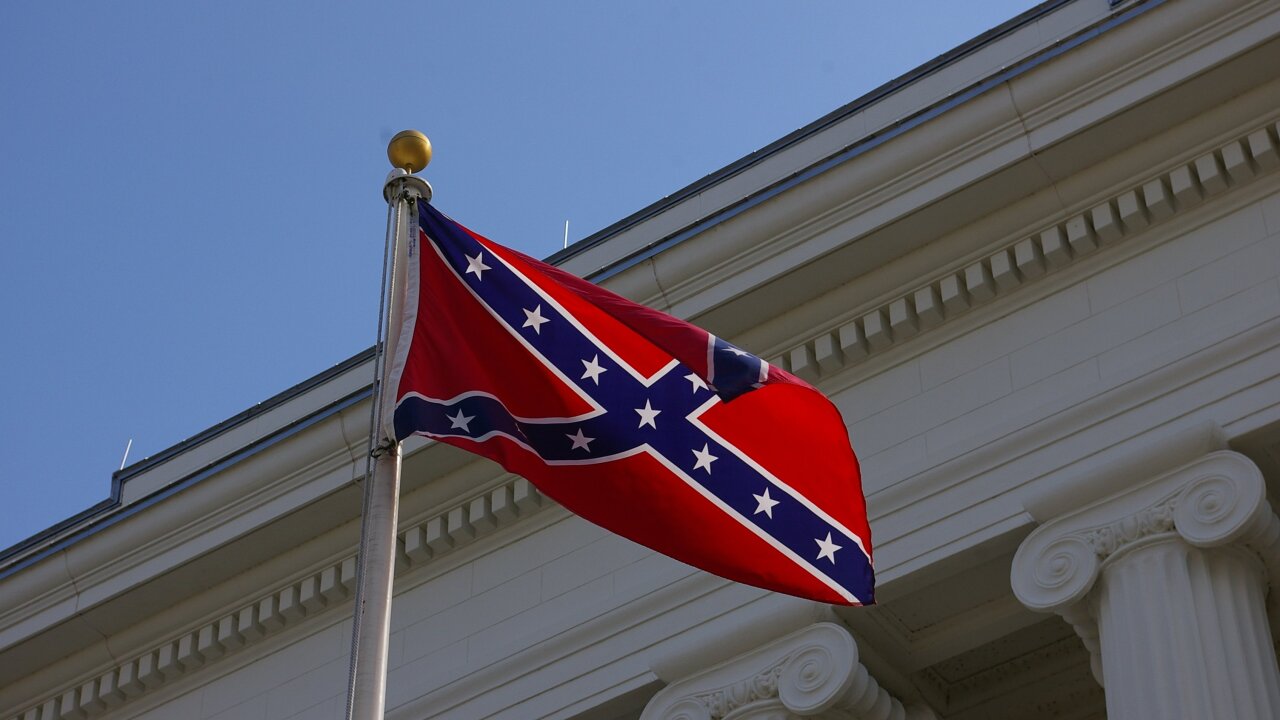 The Confederate battle flag flies at a Confederate war memorial on the grounds of Alabama state capitol in Montgomery on February 26, 2009. Credit: Wes Little/CNN Source: CNN

But even as the flags atop the statehouse have been lowered, the Confederate flag on the state capitol grounds continues to fly, defiantly, at the top of its mast.

And it can’t be touched without state legislative action.

That’s because the legislation that moved that flag off the top of the state capitol dome over a decade ago and instead placed it alongside a memorial to Confederate soldiers mandates exactly how the flag should be flown — “at a height of 30 feet” — and bars any changes to the flag without a two-thirds majority of the state legislature.

The flagpole also lacks a pulley system, meaning the flag is either all the way up, or down.

Spokespeople for Haley and Republican leadership in the South Carolina state legislature did not respond to requests for comment on Friday. But when asked Friday about President Barack Obama’s views on the issue, White House spokesman Eric Schultz said the President “believes the Confederate flag belongs in a museum.”

The deadly massacre in South Carolina and a Supreme Court ruling in a Confederate flag case that came down just 13 hours later have rocketed the controversy over the Civil War-era flag back into the spotlight.

On Thursday, the Supreme Court ruled that Texas could refuse to approve a confederate flag design on a state license plate, and later in the day civil rights leaders responding to the South Carolina tragedy began to set their sights on the Confederate flag in South Carolina.

And bringing it down halfway simply won’t do it for civil rights leaders who are now renewing their calls for the flag to be removed from the state capitol grounds altogether.

“We cannot have the Confederate flag waving on the grounds of the state capitol,” NAACP president and South Carolina native Cornell William Brooks said during a Friday press conference. “That symbol has to come down. That symbol must be removed from our state capitol.”

In an interview on CNN later in the day, Brooks added that the flag not only “represents bias (and) bigotry,” but alienates large swaths of the state’s population, which is about 28% black.

It’s not the first time civil rights advocates have made that argument, repeatedly urging for the flag’s removal from the state capitol grounds altogether since it was removed from the top of the statehouse in 2000.

Republican Sen. Tim Scott of South Carolina, the first black senator elected in the South since Reconstruction, said he expects there will be a “longer, broader conversation around the Confederate flag” in South Carolina after this week’s fatal attack.

But he insisted that the gunman’s actions weren’t connected to the presence of the flag on the state capitol’s grounds and did not say the flag should be removed.

Instead, he said that the compromise in 2000 to move the flag to the Confederate monument and off the capitol dome “at the time worked for our state” and a debate would likely begin to reevaluate that.

“Will there be an ongoing conversation going forward to look for a solution that works for our state? I think the answer will be yes,” he said.

Others have continued to defend the flag’s location and place in South Carolina history.

“This is part of who we are,” Republican presidential candidate Sen. Lindsey Graham of South Carolina said Friday in an interview with CNN’s Alisyn Camerota.

Graham said while the flag may mean different things to different people in his state and around the country, it’s not the source of problems or tragedies like the church shooting just this week.

“The problems we have in south Carolina and throughout the world are not because of the movie or symbols but because of what’s in people’s hearts,” he said. “We’re not going to give this a guy an excuse about a book he might have read or a movie he watched or a song he listened to or a symbol out anywhere. It’s him … not the flag.”

Presidential hopefuls decline to weigh in

Other likely and announced candidates for the 2016 GOP nomination tried to avoid the controversy when asked by CNN about the issue at the Faith and Freedom Coalition convention on Friday.

Home to the first Southern presidential primary, South Carolina is a top target for GOP candidates vying for their party’s nomination.

Ohio Gov. John Kasich, who is expected to launch a presidential bid this summer, suggested it wasn’t time for such a debate, instead focusing on the need to mourn the nine dead.

“The people of South Carolina reached an agreement of what should be done down there, and I’m sure they’re going to have a lot more discussions,” he said. “Now is the time to grieve and mourn for those who have been lost.”

Several others leaned on the conservative view of states’ rights in response to the controversy.

Louisiana Gov. Bobby Jindal, who is expected to announce his candidacy next week, tacked a similar line.

“Those are decisions best made at the state level,” Jindal said.

And like Kasich, Jindal added, “this isn’t a time for politics.”

Republican presidential candidate and former Pennsylvania Sen. Rick Santorum said he doesn’t “know that issue” and left it in the hands of South Carolinians.

“It’s an issue that South Carolina needs to deal with,” he said. “I don’t know all the complexities on how that was decided.”

On Saturday, Mitt Romney, the 2012 Republican candidate for President, weighed in on the issue, calling for the flag to be taken down and saying “it is a symbol of racial hatred.”

Take down the #ConfederateFlag at the SC Capitol. To many, it is a symbol of racial hatred. Remove it now to honor #Charleston victims.