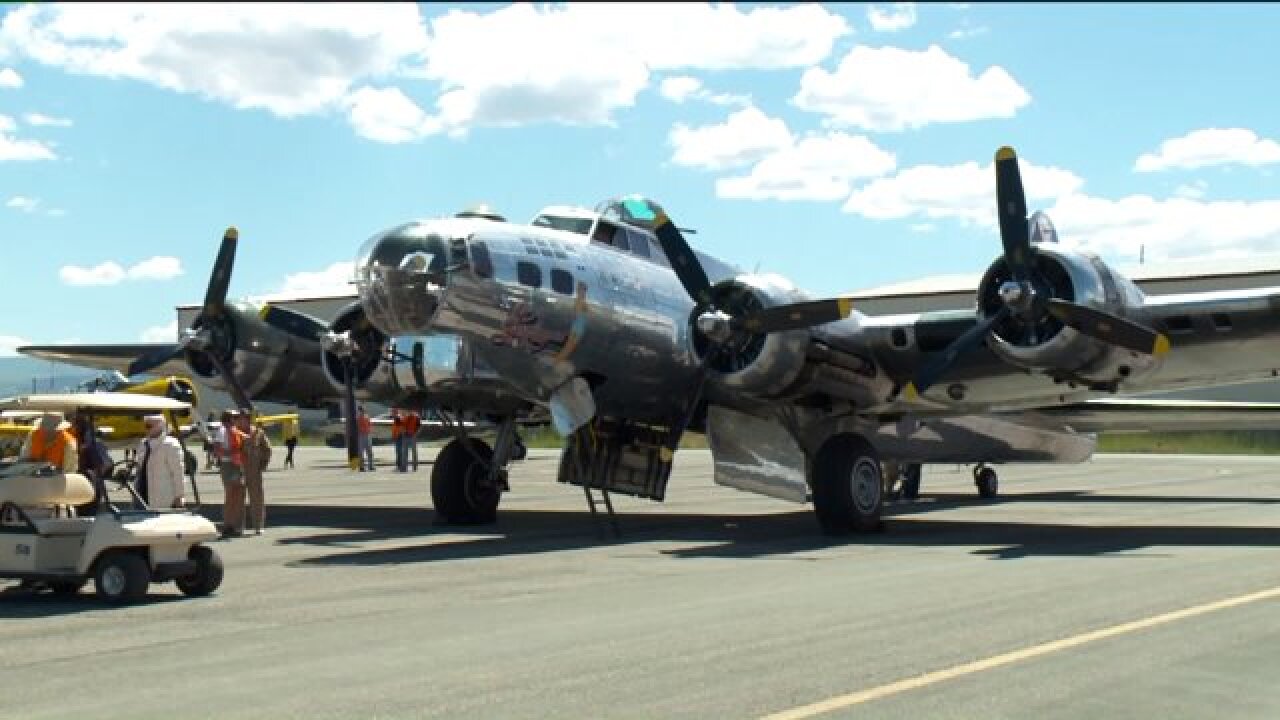 HEBER, Utah – A piece of military history was on display both on the ground and in the skies over Utah this week, and the public was invited to visit the aircraft—which is touring the nation to honor World War II veterans.

The B-17 bomber touched down at the Heber Airport Monday, and it was on display for public tours and some folks even got to take a ride on the aircraft.

The mayor of Heber City says he was emotional when he saw the WWII-era plane fly in at noon on Monday. He was there to greet visitors who came to catch a glimpse of history.

Marcia and Edward Isaacson came to remember her father, who was a B-17 pilot and flew 28 combat missions.

“So, he flew a lot of B-17s, and that’s why we're here, is we wanted to come up and see one in the flesh,” Edward Isaacson said. “See it fly. Hear it. See all the things associated with it, walk around it. Feel it. Touch it. So we can relate to it and get a better understanding of what he dealt with during his war experience.”

Her father has since passed on, so their visit this week was emotional.

“Very emotional, because they suffered a lot, in the cold and the heat, and so, yeah, makes you appreciate it,” Marcia Isaacson said.

Edward Isaacson said: "And a lot of his friends didn't come home, and it was a sad time for him, so that’s why he didn’t want to talk about it.”

“I’ve read some of his writings, and he describes how physically difficult it is to fly these airplanes in formation, and they had to fly them in formation for hours on end, with enemy fire coming at them,” Henderson said.

She said he never really talked about it before he passed away two years ago.

“For me, it’s really important that we help people remember, and understand what people did to preserve our freedom,” Henderson said.

Attendees were able to get a tour inside the bomber. Edward Isaacson said going inside was enlightening.

He said: “Get an understanding of the cramped, tiny little conditions they were in, how small the cockpit is--the walkway between the bombardier doors.”

It was very cramped space in there for all 10 crew members.

“Two pilots, a navigator, a bombardier, a radio operator, and several gunners,” explained Steve Guenard, who is the Utah Wing Leader of the Utah Commemorative Air Force.

Guenard said riding in the B-17 wasn’t a comfortable experience, especially if you imagine being shot at every day.

He said 1,000 airplanes would go on a bombing raid. This aircraft on the sentimental journey is just one of 50 still in existence, and one of only around 10 still flying today.

Donations for the tours keep the plane in the air, rather than just a stationary museum, which is the mission of the Commemorative Air Force.

“And to keep that history alive for our children and our grandchildren and generations to come, and we feel that the best way to do that is to have the airplanes fly,” Guenard said.

The event was hosted by the Utah wing of the Commemorative Air Force to celebrate 70 years since the allied victory over the Axis forces.

The plane leaves the Heber Airport Monday at 9 a.m.