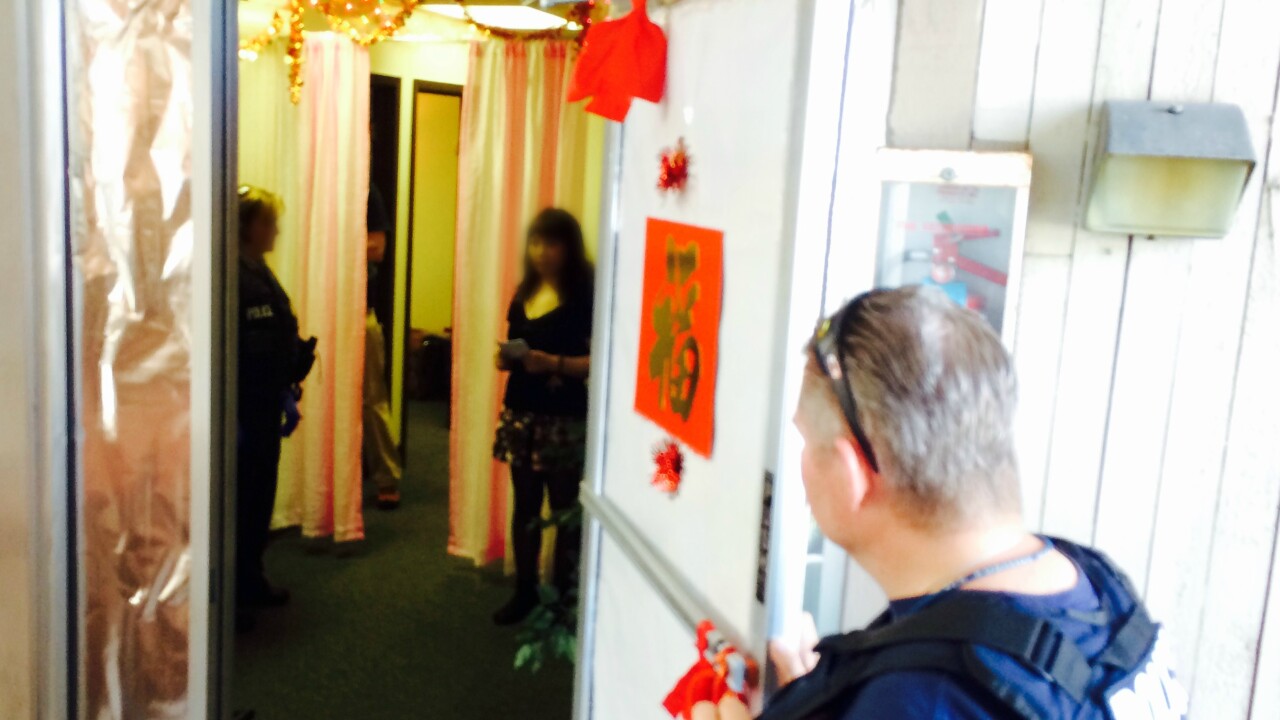 A woman is questioned inside a massage parlor raided by the Utah Attorney General’s SECURE Strike Force. (Faces blurred to protect officers and alleged crime victims.)

More than a dozen women were taken into custody and two people were booked into jail on Tuesday after members of the Utah Attorney General's SECURE Strike Force served warrants on 11 massage parlors from Ogden to West Jordan.

Changfeng Lin, 35, was arrested in a traffic stop in Salt Lake City and booked into the Weber County Jail on suspicion of exploitation of a prostitute and pattern of unlawful activity. According to a probable cause statement filed with the jail and obtained by FOX 13, Lin admitted to owning some of the parlors that were raided.

Under questioning, police wrote, "Changfeng Lin stated he does not have any other means of income and he gets half of what each worker makes inside his massage parlor."

In an interview with FOX 13 on Tuesday, Utah Attorney General Sean Reyes called the businesses "fronts for human trafficking," where women were brought in to work in the parlors to pay off debts to people who got them into the United States. The women were initially being treated as crime victims.

One woman, Lihua Huang, was booked into the Salt Lake County Jail late Tuesday on suspicion of misdemeanor prostitution and unlawful conduct at a massage therapy practice. A jail booking statement said that she was found in a room in a Salt Lake City massage parlor with a naked man who told authorities he went there "for the sole purpose of being sexually stimulated by Ms. Huang."

In recent months, the SECURE Strike Force has begun putting more scrutiny on the massage parlors. On Tuesday, state lawmakers were observing things. Rep. Sophia DiCaro, R-West Valley City, was at the bust of a Midvale massage parlor on April 30.

"I was disturbed," Rep. DiCaro told FOX 13 on Wednesday.

A woman is in custody after police raided a Midvale massage parlor on April 30.

In the April 30 bust, police handcuffed several women. One woman, Chun Xiang Yu, was charged with exploiting prostitution, a third-degree felony, and misdemeanor unlawful practice of massage therapy. According to charging documents, Yu is the owner of the parlor who also paid for an apartment where several of her workers lived.

Prosecutors accused one of Yu's employees of offering an undercover officer a sexual favor.

Rep. DiCaro said watching the raid opened her eyes about the nature of sex trafficking in Utah.

"That was really hard for me to learn that there are people in our state living like this," she said of the women who are rounded up in the raids.

Rep. DiCaro said lawmakers have discussed ways to combat human trafficking -- and will continue to examine the problem. She said they may look at whether more needs to be done to help women who may be forced to work in the sex trade, and whether more should be done to crack down on customers who keep perpetuating the illegal activity.

"I think there's opportunity to evaluate everything -- the level of fines, the ways we can disincentivize this kind of activity," Rep. DiCaro said. "I definitely think there is appetite to look at this at a more close level."