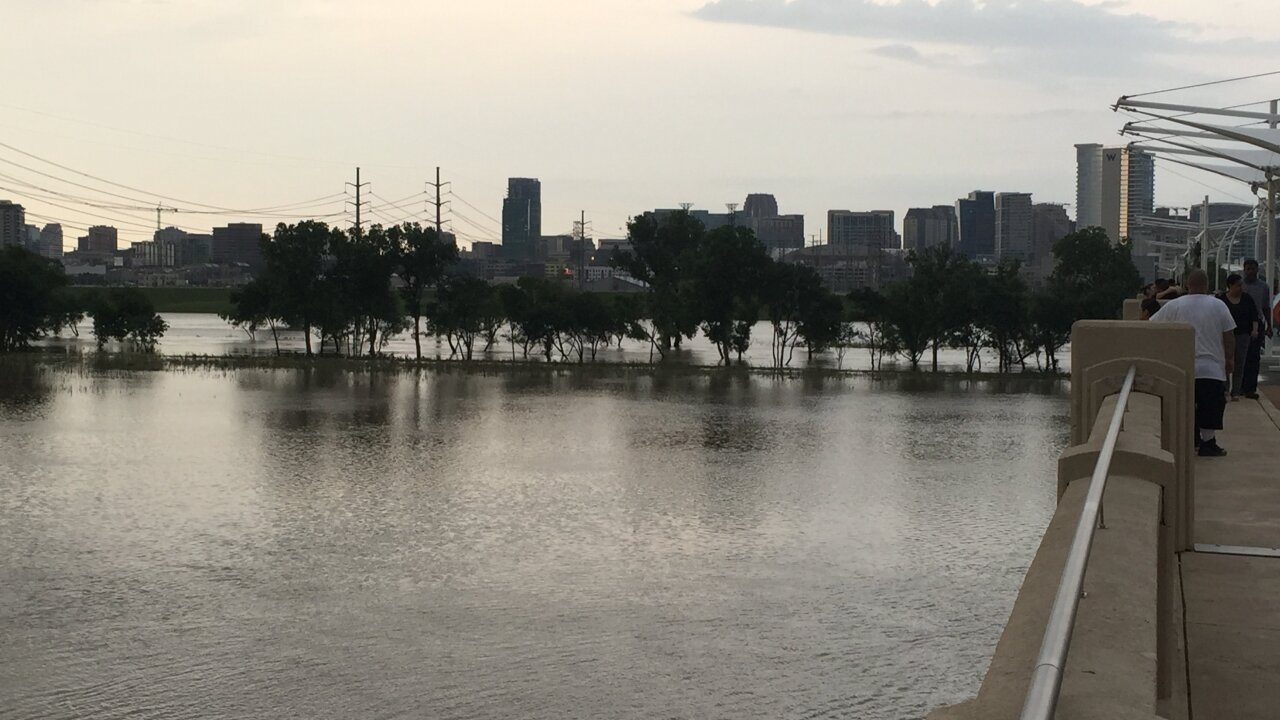 “The President today declared a major disaster exists in the State of Texas and ordered federal aid to supplement state, tribal, and local recovery efforts in the area affected by severe storms, tornadoes, straight-line winds, and flooding beginning on May 4, 2015, and continuing,” the White House said in a statement late Friday.

(CNN) — With heavy rain in the middle of the night, Billy Mack Williams saw water coming over the front sidewalk. It moved so quickly that by the time he could wake his wife, the door burst open and 3 feet of water came flooding in.

“About that time, I thought, this is it,” Williams told CNN affiliate KTVT-TV. The Garland, Texas, city councilman and his wife went to their attic for safety.

Hours later, the flash flood was over. The waters were gone, revealing the damage to his house and belongings.

“Everything is a total loss, pretty much,” Williams told KTVT.

Flash flood watches were in effect Friday for much of Texas and Oklahoma, along with parts of Kansas, Missouri and Arkansas. Some of the areas, including Dallas County, were also under a flood warning.

At least 41 people have died in severe weather over the past five days, from either tornadoes or flooding brought on by huge amounts of rain. The deaths include 21 in Texas, 14 in northern Mexico and six in Oklahoma.

Williams estimated a dozen homes on his street in Garland suffered damage when nearby Duck Creek overflowed. Floods have happened before, he said, but they’ve never been this high. The water even covered the hoods of cars.

Standing on his front step Friday morning, watching the activity as neighbors surveyed their damage, Williams said it was fortunate no one was hurt.

“That’s the most important thing,” he told the station. “This stuff can be replaced. We have flood insurance. Do I like to pay it? No, but it does help.”

Texas Gov. Greg Abbott declared a state of disaster Friday for another 24 counties, bringing the total under a state disaster declaration to 70. The move allows state resources to be used for storm response.

“The large number of Texas counties currently experiencing a state of disaster is an indication of how severe this ongoing weather situation is,” Abbott said.

Dallas County was not part of the governor’s declaration, but it, too, has been hit with heavy flooding.

All lanes of Interstate 30 on the east side of Dallas were backed up because of flooding at the Route 12 underpass.

Dallas city spokeswoman Sana Syed said the problem began at the start of morning rush hour, when the rain that had fallen overnight started accumulating in that spot.

“What caught everyone off guard was not just the amount of rain, it was how long the rain came down, and that’s what got us,” she said. “The other issue that we’re dealing with here is that people started driving when the sun was not out, so it was dark out, and that’s how this actually was started.”

The Texas Department of Transportation was sending cranes to move concrete barriers so water could recede, and the Dallas Police Department was working at the tail end of the backup to help drivers turn around, she said.

The city was also trying to get equipment to pump the water out, she said.

Overnight, at least five cars became stuck in floodwater in an underpass on Northwest Highway.

The National Weather Service said a strong cold front will move south and east over the weekend, bringing widespread rain and thunderstorms to much of the United States.

The possibility of heavy rain and flash flooding exists because of unstable air and moisture coming from the Gulf of Mexico.

“The already soaked soils of north Texas will be especially prone to flash flooding,” the weather service said.

Many areas were dealing with still-rising water. In Houston, where the water level had risen about a foot in the past day, a boat was the only way to get around some neighborhoods.

Houston resident Dennis Lee Callihan, 65, died of a heart attack this week after helping push a stranger’s car to safety amid the floods, his children said.

“He would give his shirt off his back for someone. (In) his last moments, that’s what he did,” his son Michael said.

Michael Callihan said that even though his family is grieving, “This is a very hard time for everybody here in Houston.”

Southwest of Houston, 30 homes in Wharton were under a mandatory evacuation order Friday as the Colorado River continued to rise. The river was at 41.77 feet Friday and is expected to crest at 43.4 feet Saturday, according to the Lower Colorado River Authority’s website.

Many homes on Wharton’s west side were flooded with as much of 3 feet of water, the National Weather Service said.

Authorities in Parker County, west of Fort Worth, issued a voluntary evacuation order for homes along the Brazos River, which is expected to crest for a second time in a week.

“The river is already above flood stage and will continue to rise through today and tomorrow,” said George Teague, Parker County’s emergency management coordinator. “The situation will get worse before it gets better.”

To the east, the Arkansas River was expected to crest sometime Friday afternoon, and the U.S. Army Corps of Engineers warned those who live in flood plains to be cautious of rising waters.

The river was expected to reach above flood stage as early as Friday.

This month has been the wettest May on record for the Dallas-Fort Worth area, with 16.07 inches as of Friday morning, according to the National Weather Service. The previous record was 13.66 inches, set in 1982.

In San Marcos, which lies between Austin and San Antonio, resident Debra Diaz said she was doing a lot better after the floods robbed her of everything she owned.

“I’m just thankful that I have the boys and my family and friends,” Diaz said Friday.

She said she was asleep when a friend banged on her door to warn her of the flood.

“If it weren’t for her, we would have been stuck in there,” Diaz said. “Water just coming toward us, gushing. I’m talking about water coming to my waist. It was high.”

The family’s car was full of water, so they had to get out on foot. She said the family managed to flag down a school bus, which took them to safety — but just barely.

“The water was already past the tires of the school bus,” she said. “That’s how high it was.”