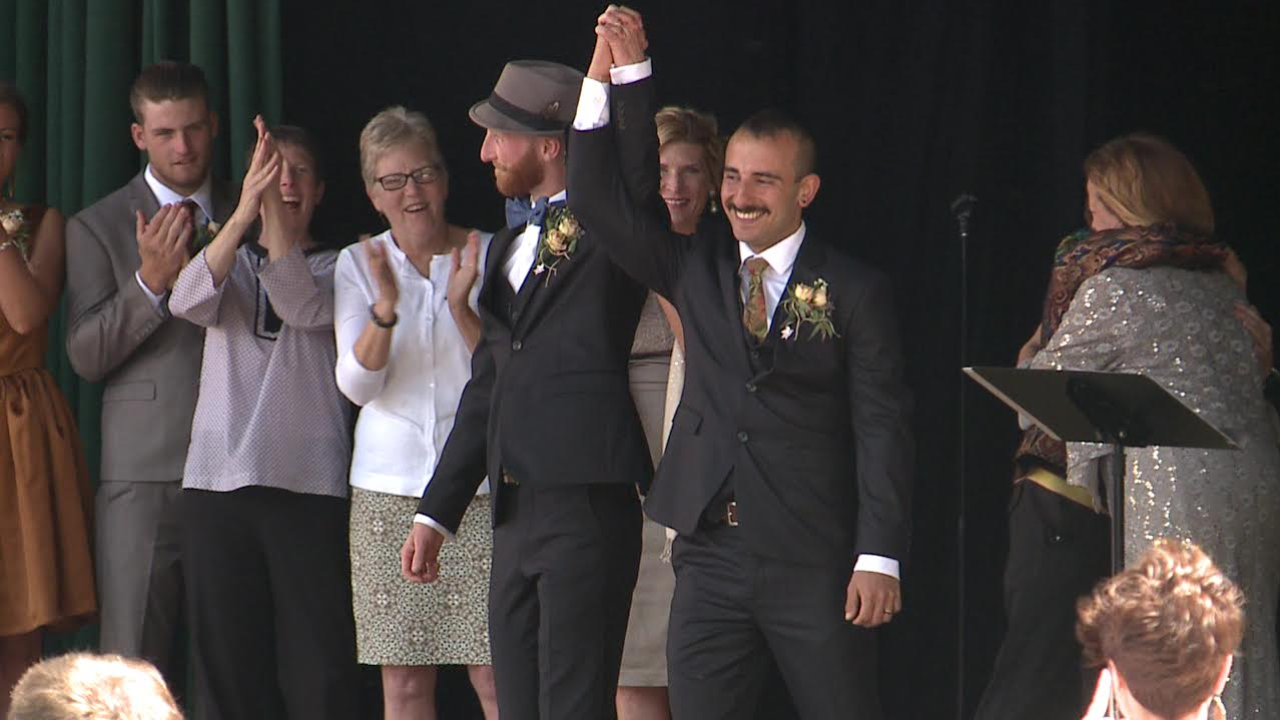 Derek Kitchen and Moudi Sbeity after being legally married in Utah on May 24, 2015. (Image by Eric Brown, FOX 13 News)

SALT LAKE CITY -- Theirs was a marriage made in litigation.

Derek Kitchen and Moudi Sbeity, the couple involved in the landmark case that led to same-sex marriage in Utah, tied the knot in a downtown ceremony Sunday.

"I'm grateful for the opportunity to love you," Kitchen said in his vows.

"Derek Kitchen, I love you," Sbeity said in his vows.

After the two were pronounced "husband and husband," the crowd of about 500 at the Gallivan Center erupted in cheers as they kissed and marched down the aisle, hand in hand.

Derek Kitchen and Moudi Sbeity after being legally married in Utah on May 24.

"It was a long time coming and it feels like, the best accomplishment I've ever made in my life is marrying him," Moudi Sbeity-Kitchen (the last name the couple has chosen) said in an interview with FOX 13 afterward.

Kitchen, Sbeity and two other couples sued the state of Utah over Amendment 3, which defines marriage as between a man and a woman and does not recognize anything else. In 2013, a federal judge ruled in Kitchen v. Herbert, overturning the state's same-sex marriage ban.

Immediately, hundreds of couples across the state rushed to clerk's offices to wed.

The state appealed the case to the 10th Circuit Court of Appeals in Denver, where Amendment 3 was declared unconstitutional again. The Utah Attorney General's Office then took it to the U.S. Supreme Court last year, where the justices refused to hear it -- clearing the way for same-sex marriage to be legal in Utah.

After the rulings, the couple did not rush to wed. They insisted on waiting to have a formal ceremony with friends and family. At Sunday's ceremony, their co-plaintiffs and lawyers joined them in the wedding party.

"There were organizations and people who told Derek and Moudi and the other plaintiffs: 'You must drop this case. Utah is not the place for marriage equality and you are going to mess up our movement," their attorney, Peggy Tomsic, said. "Derek and Moudi stood strong with the other plaintiffs and said, 'You know what? Utah is the time, the place and we're going to do it' and they did."

Sunday's ceremony was opened to the public. The couple said the community supported them throughout their legal battle -- and they wanted to declare their love publicly.

"Today was pretty monumental in our world, and to be surrounded by so many loved ones and people in the community, it's pretty special," Derek Sbeity-Kitchen said.

Moudi and Derek Sbeity-Kitchen, kiss after an interview with FOX 13 about their marriage on May 24. The couple was involved in the landmark case Kitchen v. Herbert that led to same-sex marriage in Utah.

As the couple hugged well-wishers, two of their co-plaintiffs in the Amendment 3 lawsuit, Laurie Wood and her wife, Kody Partridge, stood nearby and held hands, beaming.

"It's all about love and celebration, it really is," Partridge said, wiping away tears. "It is just amazing."

Neither Utah Governor Gary Herbert or Attorney General Sean Reyes' offices would make any statement on the wedding. Salt Lake County Clerk Sherrie Swensen, the other defendant in Kitchen v. Herbert, said she personally helped the couple fill out their wedding license.

"I congratulate them and I'm very happy for them," Swensen told FOX 13.

Rep. Patrice Arent, D-Salt Lake City, attended the ceremony to offer her congratulations to the couple.

"I wish they didn't have to go through all that," Arent said of the Amendment 3 lawsuit. "But they did. And because they did, many other couples are going to have this joyous occasion, too."