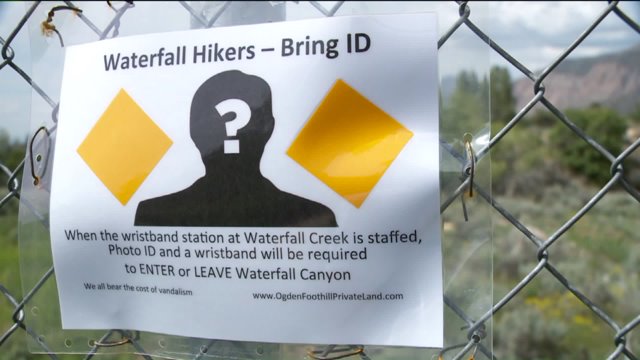 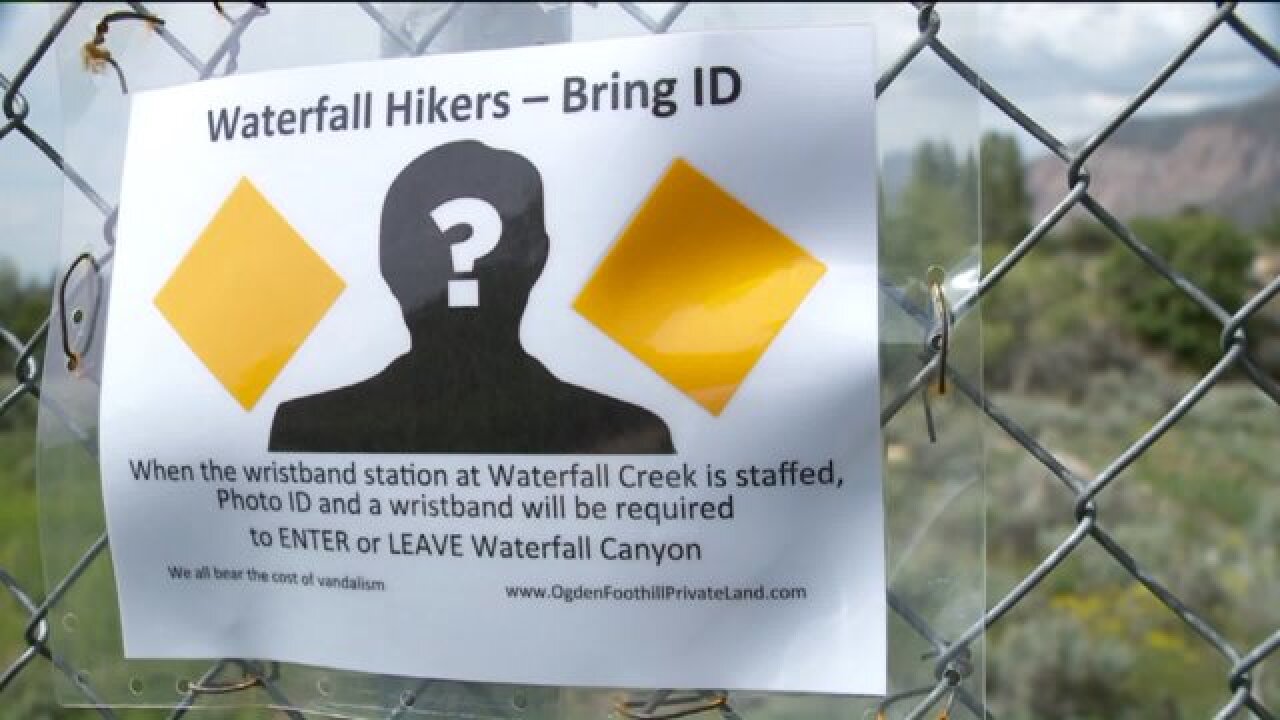 OGDEN, Utah -- Signs along a popular hiking trail on Ogden's east side are causing concern for outdoor enthusiasts.

Posted on a fence a few hundred feet from the 29th Street Trail Head is a sign that reads: "Waterfall Hikers - Bring ID. When the wristband station at Waterfall Creek is staffed, Photo ID and a wristband will be required to ENTER or LEAVE Waterfall Canyon."

Also printed on the sign is the web address www.OgdenFoothillPrivateLand.com, which redirects traffic to a Facebook page. It contains postings (with pictures) about vandalism in and around private property owned by Chris Peterson. The Facebook page also has postings about responsible hikers who've taken it upon themselves to clean up after others.

Peterson owns a large swath of land which the Bonneville Shoreline traverses through, along with a narrow canyon leading to a waterfall where he operates Via Feratta Ogden, a guided rock climbing adventure.

Breanna Whiteleather told FOX 13 News she encountered the "wristband station" on the Bonneville Shoreline Trail a few weeks ago.

"It was just four guys with folding chairs" she said.

The men in matching green vests asked her for her identification and phone number, which she said she provided to them, believing they were forest rangers. When she asked why, she said the men explained the information would be used to locate and prosecute vandals should any damage occur on private property the day of her hike.

Some Ogden residents fear the signs could signal changes in trail use in the future.

"We run six days a week, and five of those are on the trails," she said.

Many of her students are too young to have a state issued ID and have expressed concern over what to do if asked for ID on the trail.

Ogden City Councilwoman Amy Wicks isn't certain whether Peterson is simply trying to crack down on vandalism, or if he has other long-term plans for his property.

"Are we not going to have access in the future, are we going to have to pay for access?" she said. "Those trails have existed for generations, and from what I've been told, there are protections for that."

FOX 13 News  contacted the Ogden City Attorney's Office for comment. They indicated that they are well aware of the signs and are looking into the issue, but have no public comment at this time.

Both the Ogden City Police Department and the Weber County Sheriff's Office were also aware of the signs, but they said they haven't been called to assist with any incidents related to them.

Chris Peterson has not responded to FOX 13 News' request for an interview.