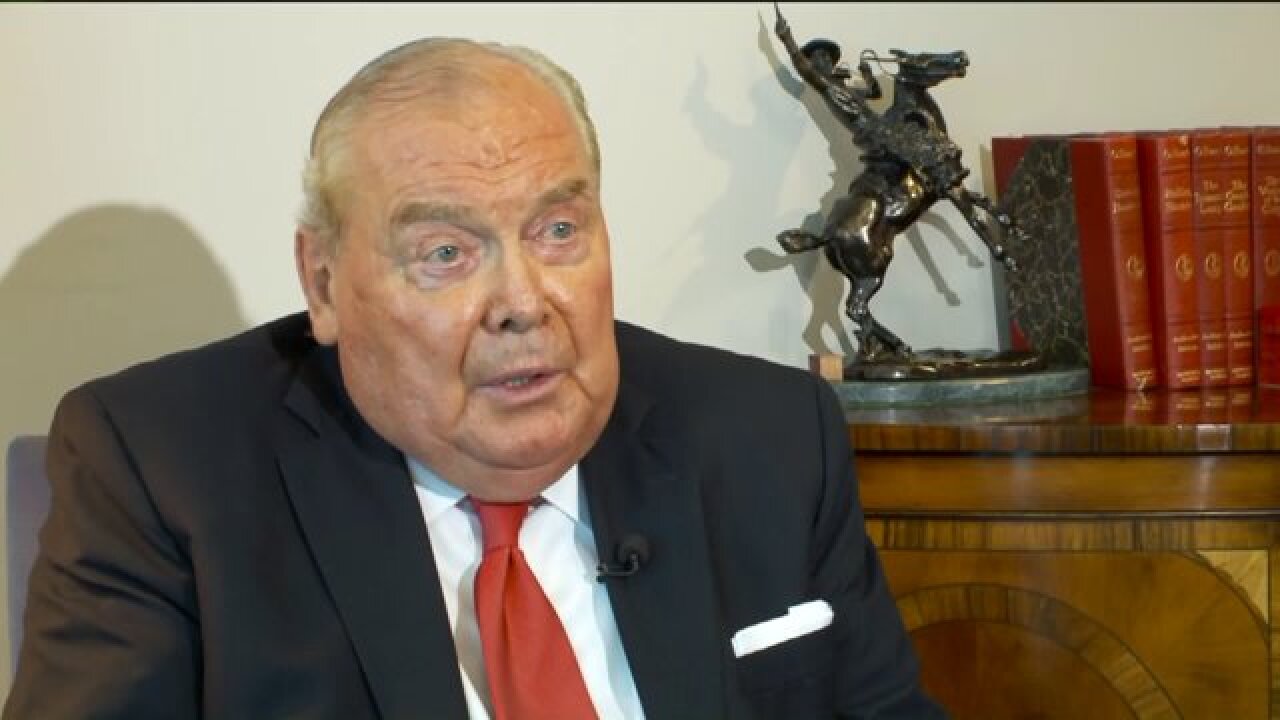 SALT LAKE CITY -- Jon Huntsman Sr. was born in 1937. At eight weeks early he was anxious to get life started, and he has been anxious to attack life ever since.

Now, 78 years later, he is still tackling challenges and touching millions of lives through what he has done with the wealth he has accumulated.

Huntsman recently sat down with FOX 13 News’ Bob Evans, and they discussed a wide-range of topics—including Utah Senator Mike Lee.

"Mike Lee is a fine man; don't misunderstand me,” Huntsman said. “His father Rex was my dearest, dearest friend."

But in December of last year, Huntsman's criticism of Senator Lee was stinging: He called him an embarrassment to the state of Utah. That was before Jon Huntsman Jr. announced he would play a major role in Lee's re-election bid in 2016.

"And so Jon Junior and I just happen to look at it a little differently,” the senior Huntsman said.

He elaborated on his opinion of the conservative lawmaker.

"The reason that I was upset with Mike, Mike Lee, Senator Lee--is that when he shut down the government it cut out funding for all forms of research,” he said. “The Huntsman Cancer Institute lost several million dollars in funding that we otherwise would have had."

The battle against cancer has become Huntsman's passion and major focus in life, and the Huntsman Cancer Institute is one of the leading cancer centers in the world. And there has, just recently, been great news about skin cancer from the center.

“Our patients are living longer, and we're able for the first time in melanoma to potentially talk about a cure, which is something we have not been able to talk about before,” said Robert Andtbacka, a surgeon oncologist at the Huntsman Cancer Institute.

"There is great reason for optimism in cancer,” Huntsman said.

In fact, Huntsman said mortality rates have dropped for every form of cancer, with the exceptions of ovarian cancer in women and pancreatic cancer in men.

"The bankers think I'm crazy,” Huntsman said. “They've sent them out from New York, several of them have come out, he said, 'Huntsman, you're the only man in America who borrows 50 million dollars so you can give it to charity.'"

And because that's against banking policies, Huntsman tells them to, "Put it down for something else. Put it down for one of my construction projects, or a new plant. I don't care what you put it down for, because whatever it takes to solve this disease--we've gotta do it."

Earning the Armenian Medal of Honor

But his humanitarian efforts extend beyond cancer research. In 1988, after a 6.8-magnitude earthquake devastated northern Armenia, Huntsman saw a people in need and joined the international relief effort.

"I put a total of 53 million dollars into Armenia to help rebuild the country,” he said.

The money helped fund doctors and nurses, as well as construction workers and materials to build a concrete plant, apartments and a school—all up to U.S. codes.

As a result, Huntsman became the only American to ever receive the Armenian Medal of Honor.

Last June, the ground-breaking for a Huntsman Cancer Institute expansion was held, and the expansion doubled the center’s research capacity.

One part of the facility is focused on curing childhood cancers.

“Thus with your support, we will fight on,” Huntsman said at the groundbreaking. “We will be at your side. We will hold your hand. We will love you. We will gently and tenderly care for you."

The man has a remarkable heart and a penchant for charitable causes, but he has also had his share of political involvement. He worked in the Nixon White House and even briefly ran for governor in Utah. His son served as Utah’s governor.

All of that means Huntsman is acutely aware of politics and social issues, and on the day he sat down with FOX 13 News the U.S. Supreme Court had heard oral arguments regarding same-sex marriage.

Huntsman said if a particular religion believes it's the right thing to do, then members of that faith should feel free to follow the dictates of their conscience.

"I look at some of these people who put 50 million or 100 million dollars into these campaigns, and go out and spend all their time and money raising money for campaigns; It's ludicrous, because we could help solve cancer with all of that money,” he said.

A lifetime of charitable giving

Over his lifetime, Jon Huntsman Sr. has donated more than a billion dollars to charity. According to Forbes Magazine, he's one of only 19 living billionaires in the world to do so.

"You don't even think about it, If you have it, you just give it,” he said of his charity work.

Huntsman said the money isn’t really his; he’s just holding it for a time.

"Somebody’s given it to me,” he said. “I mean, I'm just a temporary trustee of these funds."

And with those funds he has made major contributions to his alma mater, The Wharton School of Business and others like The University of Utah and Utah State University. He has funded 1,500 college scholarships. He helped rebuild the country of Armenia and has given millions to help Utah’s homeless—among many other projects.

But after four bouts with cancer, and both his parents dying of the disease, more than half a billion dollars has gone into the Huntsman Cancer Institute.

"And to the extent that we can bring hope to more people and to more families, and to those who are ill, or those who are suffering, it's just such a joy that you don't stop to ever take an inventory or think about it,” he said.

A personal battle with disease

Huntsman's goal is to give all of his money away before he dies.

"I have this disease today that's called polymyalgia rheumatic,” he said. “It's a terrible disease. Both my shoulders, my rotator cuffs are gone. My knee's gone. My Achilles heel is gone. And little by little, it erodes your body away."

And the prognosis isn’t good.

"There's no cure for polymyalgia rheumatic,” Huntsman said. “About 10,000 people in America have it, and they usually die between years two and years four of the disease."

He said he’s not just used to risk: he thrives on it.

"You have to be a little bit of a riverboat gambler, and you have to be willing to take a major risk and bet the farm,” Huntsman said. “And if you don't do that, then you're not really a true entrepreneur."

But Huntsman said you have to be a wise entrepreneur by doing your homework and knowing what you're getting into.

It’s true he has slowed down quite a bit in recent years, as the polymyalgia rheumatica is taking its toll. His son, Peter, runs the company day-to-day now, but Jon Huntsman Sr. insists he is far from done.

He said he has many more things he wants to accomplish, and based on how he has faced challenges in the past: Don't be surprised by what he gets done.