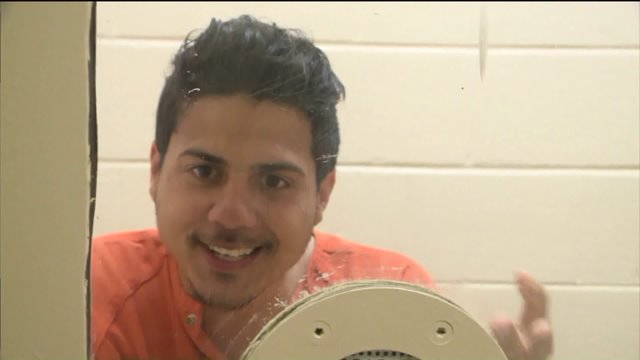 VIRGINIA BEACH, Va. -- A Virginia man was arrested on Monday after he allegedly robbed a bank and posted videos and a photo of the bank robbery on Instagram.

Dominyk Antonio Alfonseca, 23, walked into the Townebank on Constitution Drive in Virginia Beach on Monday and handed the teller a note demanding money, according to police.

Alfonseca was arrested less than 30 minutes later. However, before he was taken into custody, he posted two videos of the bank robbery and a photo of the note he gave the teller to Instagram.

Alfonseca talked to WTKR on Wednesday and admitted he walked into the bank, but he denies "stealing" from the bank. Alfonseca claims he "politely" asked for the money in his note and the bank teller could have said no.

Alfonseca insists he's not responsible for stealing from the bank and claims the bank gave him the money.

"It was clutch time for her... and she had to make the shot. Shoot it, or not shoot it. It either goes in or it doesn't. She could've said 'no,' and I could have left," Alfonseca told WTKR. When asked if he would have left, he said "Of course. What else would I do?"

Alfonseca is scheduled to be in court for a preliminary hearing on June 12.