How the remote, beautiful Pacific islands became the fattest place in the world 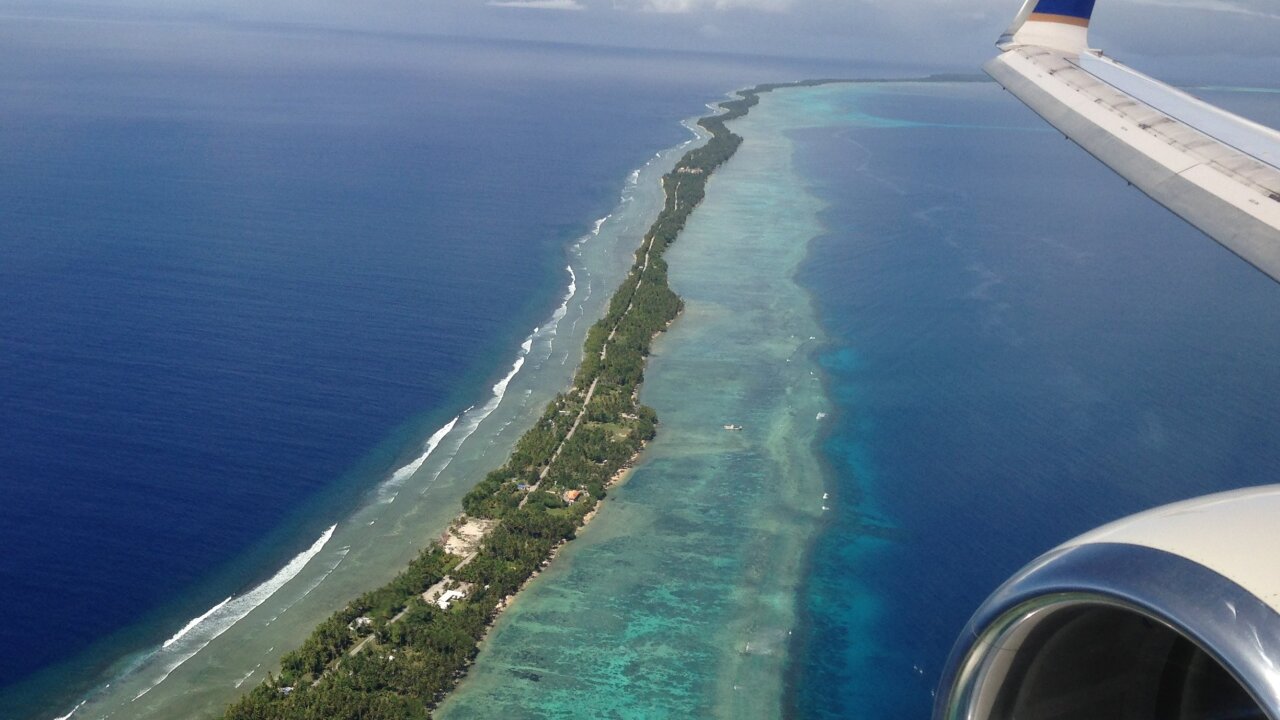 Flying above the Marshall Islands on Saturday, Feb. 8, 2014.

They’re remote and beautiful. A place many long to escape to for sun, sea and serenity. But the Pacific islands have another reality for the residents living there — a life based on imported food, little exercise and remote access to healthcare.

The result? The most obese nations in the world.

“One third of the world is either overweight or obese right now,” says Emmanuela Gakidou, professor of Global Health at the Institute for Health Metrics and Evaluation. Gakidou’s recent paper used data from countries across the world to identify the global burden of obesity and trends seen in different populations. “The Pacific islands have a lot of countries with very high levels of obesity,” she adds.

Among the top 10 most obese countries or territories globally, nine are Pacific islands, according to the World Health Organization (WHO), making this paradise the fattest region of the world.

“Up to 95% of the adult population are overweight or obese in some countries,” says Temo Waqanivalu, program officer with the WHO’s Prevention of Non-communicable Diseases department. As a Fijian Native, Waqanivalu has worked on the issue for over a decade and seen the epidemic evolve first-hand, aided by the cultural acceptance of bigger bodies as beautiful. “In Polynesia the perception of ‘big is beautiful’ does exist,” he says. “[But] big is beautiful, fat is not. That needs to get through.”

Percentages for obesity range from 35% to 50% throughout the islands, according to the WHO. The Cook Islands top the ranks with just over 50% of its population classified as obese.

Obesity is measured through an individual’s body mass index (BMI) and a measurement above 30kg/m² is defined as clinically obese.

Pacific islanders tend to have a naturally big build, says Jonathan Shaw, associate director of Baker IDI Heart and Diabetes Institute, Australia. “With Pacific islanders, their frame is typically bigger,” he explains, “but that still doesn’t account for the obesity we see.”

Poor diets and reduced exercise have become a major public health concern for the region as they are not only a cause of obesity — associated diseases are also rife, such as heart disease, stroke and diabetes, the latter of which has a known genetic basis among locals.

“This is a population with a genetic predisposition and when exposed to Western lifestyles results in high rates of diabetes,” says Shaw. “[This is] undoubtedly caused by high rates of obesity.”

The epidemic began through the tropical region turning its back on traditional diets of fresh fish and vegetables and replacing them with highly processed and energy-dense food such as white rice, flour, canned foods, processed meats and soft drinks imported from other countries. One of the root causes of the change is the price tag.

“All over the world, poor quality and highly energy-dense food is the cheapest,” says Shaw. As demand for healthier alternatives remain low, their market is small.

This is exemplified by fishermen often selling the fish they catch to in turn purchase canned tuna. “[You] can buy a few meals with what you get selling fish,” says Waqanivalu.

The new food environment locals find themselves living in has accelerated the trend towards consuming processed food. “It’s significantly cheaper,” adds Waqanivalu. “It’s cheaper to buy a bottle of coke than a bottle of water.”

As with other regions of the world, increased urbanization and sedentary office cultures have further aided the rise in obesity among Pacific islanders.

“A lot of physical activity was in the domain of work,” says Waqanivalu, referring to fisherman heading out to sea and others working their land on plantations. “The concept of leisure-time activity is new,” he says.

The tropical climate desired by sun seekers is less attractive to those needing to keep fit. “In tropical countries there is a desire to avoid physical work and even walk,” says Shaw. “We’re all driven to conserve energy.”

All in the genes?

Some scientists believe that Pacific island populations have evolved to maintain their larger build — a concept known as the “Thrifty Gene” hypothesis. For this region of the world, the concept is based on the fact Pacific islanders once endured long journeys at sea and those who fared best stored enough energy in the form of fat to survive their journey.

“We have the remnants of those people … and their metabolism as well,” says Waqanivalu. The increased risk of obesity among native Pacific islanders is shown on the islands of Fiji, where the population has a more mixed ethnicity. The country stands at the lower end of the region’s spectrum with 36.4% of the adult population classed as obese. Just more than half of the Fijian population are native iTaukei, with the remainder mostly of Indian origin, according to the CIA World Factbook. “That explains the lower rates,” says Waqanivalu.

The naturally higher BMI of the people in the region has, however, prompted calls to increase the cut-off for the level of BMI denoting obesity in the Pacific region from 30 to 32 kg/m². A lower cut-off has been suggested for Asian populations based on the same premise, as Asian countries — including Korea, Myanmar and Cambodia — make up the majority of the lowest 10 countries globally in terms of obesity..

After the global trends in obesity seen in her study, Gakidou’s real concern is the rates her team saw in children in the Pacific. “The rate for children is high … about one in five children [are obese],” she says. “This has repercussions in the long-term.”

Repercussions include diabetes, which is already a burden on health services in the region. “The concern in children would be early onset of diabetes,” says Gakidou.

The WHO has made a series of recommendations to improve the situation and is implementing them through policy changes in the countries. “Type II diabetes is emerging in young children 10-11 years old,” says Waqanivalu, who has also heard reports of a child as young as seven years old being affected. “[It’s the] tip of the iceberg in children.”

But Waqanilu is confident his department is making some progress through recommendations such as increased taxation on soft drinks, improving trade in the region, controlled marketing of products targeting children through schools, and policies to promote healthier diets and exercise.

“The whole food environment needs to be changed,” he says. This has been the ambition of the Healthy Islands Vision — initiated by the ministers of health for the Pacific island countries in 1995 — which aims to combat obesity and diabetes among its health priorities.

Health systems also need strengthening to better handle the consequences of obesity. “We have definitely made steps but need to make strides for this to be sorted in our time,” says Waqanivalu.