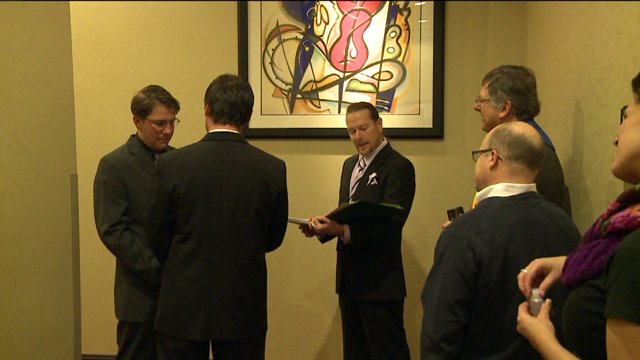 The U.S. Supreme Court heard arguments on Tuesday on the issue of same-sex marriage and whether states have a right to define marriage as they see fit.

The nation’s top court heard arguments involving Tennessee, Ohio, Kentucky and Michigan. Currently, 37 states (plus the District of Columbia) have same-sex marriages after a sweeping series of rulings in courts across the nation last year.

Transcripts and audio of the arguments can be found here

The arguments were closely followed here in Utah, where the state’s same-sex marriage ban was the first to be overturned after the court struck down the federal Defense of Marriage Act. Last year, Utah asked the U.S. Supreme Court to consider its appeal of Amendment 3 (which defines marriage as between a man and a woman and does not recognize anything else). The court declined, clearing the way for same-sex marriage in the state.

“We see history bend toward freedom, toward protecting even those who are in the minority,” Kody Partridge said in a recent interview with FOX 13.

She and her wife, Laurie Wood, were among the original plaintiffs in the Amendment 3 case.

As FOX 13 first reported earlier this month, the Utah Attorney General’s Office filed an amicus in support of states, asking the U.S. Supreme Court to rule against same-sex marriage. On Tuesday, Utah Attorney General Sean Reyes hoped the court would finally provide an answer for them.

“Finally, the Supreme Court of the United States can put to rest the unanswered questions of United States v. Windsor (2012) regarding a state’s power to define marriage in our federal system and whether any state must, in all cases, recognize marriages performed in any other state. Although Utah’s case is not one of the four cases heard, Kitchen v. Herbert was necessary in the national dialogue to resolve unsettled law. We are pleased that the Court has chosen to hear arguments on this historic challenge and to ultimately make it possible for all citizens to have clarity and resolution.”

Kent Frogley, the president for the board of trustees for the Utah Pride Center, said the case is a historic one.

“The federal government doesn't license marriage, the state's license marriage--and in the state of Utah, the people voted that marriage is between a man and a woman,” she said, referencing Amendment Three.

Ruzicka believes marriage is defined as between a man and a woman. She is hoping the court will affirm the right of individual states, like Utah, to decide if it will license same-sex marriages.

Bill Duncan at the Sutherland Institute for Family and Society agrees.

“We believe that the state's should be free to continue to define marriage the way they choose and not be forced by the federal courts to adopt same-sex marriage as the new law," Duncan said.

MORE: Info from the Supreme Court

However, it is the ambiguity across the country that local marriage equality advocates hope the high court will put an end to.

“It will create a uniformity of law, meaning that if you are married in Utah, as a gay or lesbian couple, you will be married in every other state in the country, and that is huge,” Frogley said.

MORE: Click here for the latest updates from the SCOTUS Blog