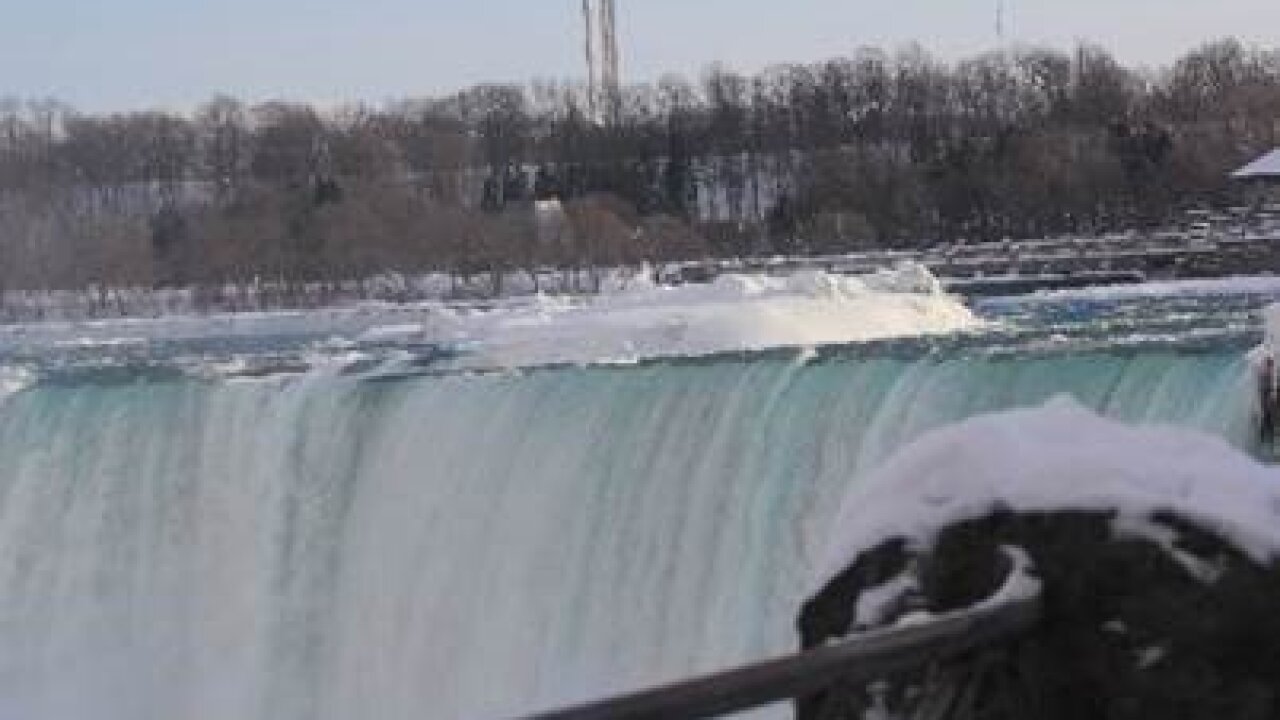 Snow-covered trees, railings and roads greet visitors to the Niagara Falls area on Feb. 19, 2015. Temperatures have been so cold part of the Falls have frozen. Despite the cold temperatures, local businesses are seeing steady business as tourists flock to see the frozen Falls. Credit: Chris Stewart/CNN

(CNN) — For much of the U.S., stepping into a walk-in freezer will be a lot more comfortable than going outside.

From Minnesota to Texas, another blast of frigid weather is walloping the country. Here’s what to expect:

Wind chills will plunge to about minus 40 Sunday in parts of North Dakota and Minnesota as another Arctic blast barrels through, CNN meteorologist Derek Van Dam said.

As the work week starts, other cities will endure the mind-numbing freeze.

Chicago’s wind chill will be 20 below zero on Monday.

And on Tuesday morning, Boston will suffer a wind chill of minus 20, while New York and Philadelphia will grapple with wind chills of minus 4.

You know it’s bad when parts of Texas will be covered with ice.

Up to 2 inches of sleet will fall in the Dallas-Fort Worth area Sunday and Monday, the National Weather Service office in Fort Worth said.

In Kentucky, the massive weight of snow on the roof of a Walmart may have been enough to crack the walls.

The store in South Williamson was evacuated and closed indefinitely after store employees detected the cracks, apparently caused by the load of snow on the roof, Walmart spokeswoman Tricia Moriarty said Saturday.

And the roof slid off the top of a home in Concord, New Hampshire, CNN affiliate WMUR reported, leaving nothing to protect the family from relentless snow.

It’s not clear exactly what caused the roof to slide off, WMUR said, but state officials are warning about the dangers of roof collapses amid heavy snowfall.

At least 26 people have already died from weather-related incidents in the U.S. and Canada over the past week.

The Tennessee Emergency Management Agency reported 21 deaths, including 11 from hypothermia and several from vehicle accidents. A dialysis patient who was unable to get treatment also died.

In North Carolina, a 19-year-old woman died in a weather-related traffic crash, the governor said.

In New Hampshire, a woman died apparently from exposure to the cold in an area known for hiking , state officials said.

And in Toronto, police said 3-year-old Elijah Marsh died after wandering out of an apartment on his own wearing only a T-shirt and boots.

Thousands of air travelers will be grounded across the country Sunday.

More than 600 flights into, out of or within the U.S. have been canceled, according to flightaware.com.

Airports in Denver, Philadelphia and New York are the most affected.

While the Northeast will stay frigid the next few days, the snow and freezing rain will ease up by midday Monday.

And the massive snowfall in the Denver area could be a boon for outdoor athletes, CNN meteorologist Ivan Cabrera said.

“In the higher elevations, we’re going to be measuring in feet — excellent news if you are out skiing in Colorado.”