What would it take for Utah to spend as much on education as the national average? 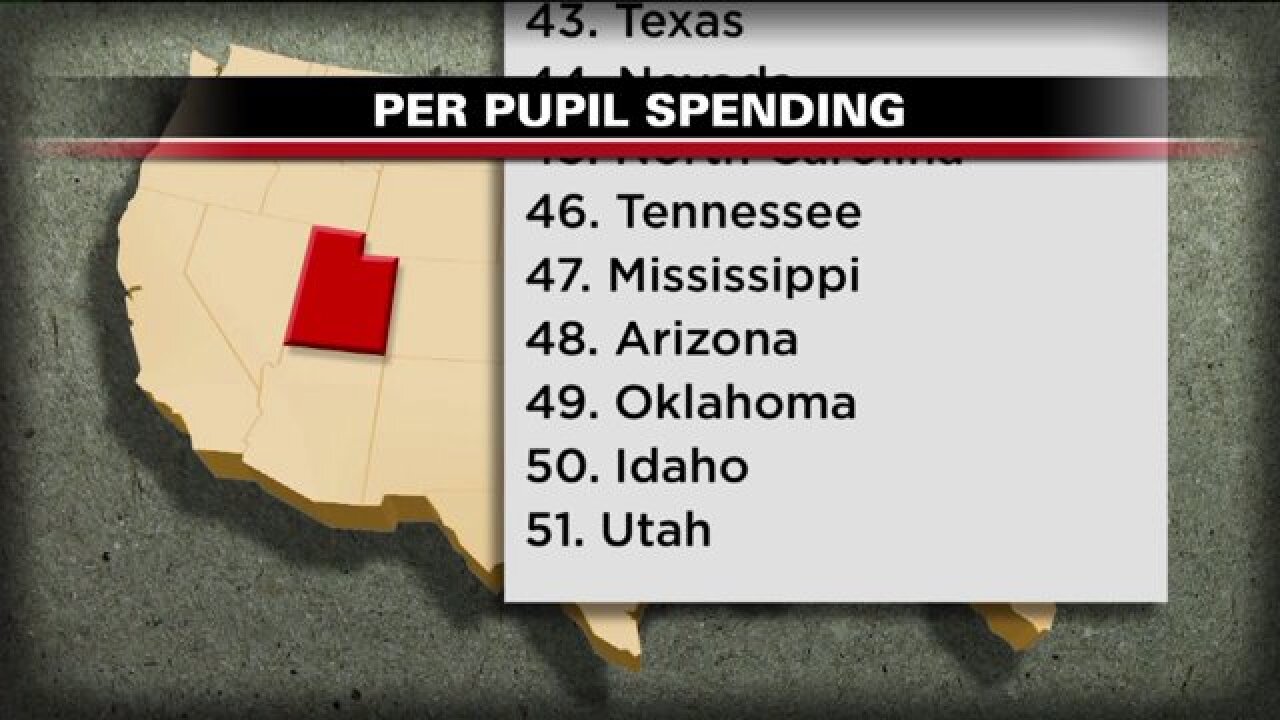 FOX 13 News has partnered with the Utah Foundation for a series of reports asking "What would it take" to tackle some of Utah's biggest challenges. The Utah Foundation is a non-partisan, non-profit public policy think tank, click here to visit their website.

SALT LAKE CITY -- Utah schools have less money per student than any other state in the nation, including the District of Columbia.

What would it take to spend as much as the national average? The answer is daunting.

Utah’s K-12 public education system currently spends about $3.9 billion dollars a year. Divide that by our student population, and we’re spending about $6,206 dollars per year for each student. The national average is $10,608 per year per student, and catching up to that figure would cost Utah taxpayers $2.7 billion dollars more every year.

That would mean doubling the state income tax rate from 5 to 10 percent or doubling property taxes across the board.

Governor Gary Herbert’s education adviser, Tami Pyfer, says that is not going to happen, but there are steps that can lead Utah in what she considers the right direction.

Pyfer said: "It's a matter of priorities. What are our priorities?”

Pyfer wants the legislature to pass the governor’s education budget, which would send an extra $246 million to Utah schools, much of it to bolster a figure called the Weighted Pupil Unit, or WPU.

The WPU is significant because it distributes money to school districts based on student population, thus helping to even funding disparities between rich and poor districts. The WPU also allows districts the latitude to determine the use of the money themselves.

It would be the biggest new investment in Utah Schools since the Great Recession, but it would still leave Utah dead last in per-student spending.

Rep. Carol Spackman Moss, D-District 37, is a former teacher, and she said Utah should consider a gradual increase in the income tax.

“We're facing a real crisis right now in education and the future of Utah, the economy, our quality of life, the fabric of our society depends on an educated citizenry and we're not doing right by our students,” Moss said.

Moss points to a decision in 2008 to flatten Utah’s income tax to 5 percent across the board, when top rates used to be at 7 percent.

"That is now nearly half a billion dollars less revenue coming to education,” Moss said.

Moss’s idea would put Utah’s per student spending ahead of Idaho--allowing the Beehive State to bask in the glory of 50th place rather than 51st.

State School Board Vice Chair David Thomas would like to revisit two decisions from 1996.

Utah used to devote all of it’s income tax to public schools, but with the budget flush in the tech boom of the Clinton years, Utah voters decided to share income tax money with colleges and universities.

Thomas said that now equals about a half billion dollars no longer in public schools. At the same time, Utah froze property taxes instead of allowing them to increase with inflation.

"If you combine those two things, that’s a billion dollars,” Thomas said.

A billion dollars would push Utah into 48th place in student funding, ahead of Idaho, Oklahoma and Arizona.

In other words, Utah has a long way to go. But FOX13 News' partner in this report, the Utah Foundation’s Stephen Kroes, says the focus has to be long-term, and for now it’s enough to acknowledge the problem and start moving forward.

"What seems like the best strategy is frankly just avoiding the future tax cuts,” Kroes said.

Shawn Teigen of the Utah Foundation came to the FOX 13 News Studio Friday to discuss Thursday's report, see the video below for his comments.