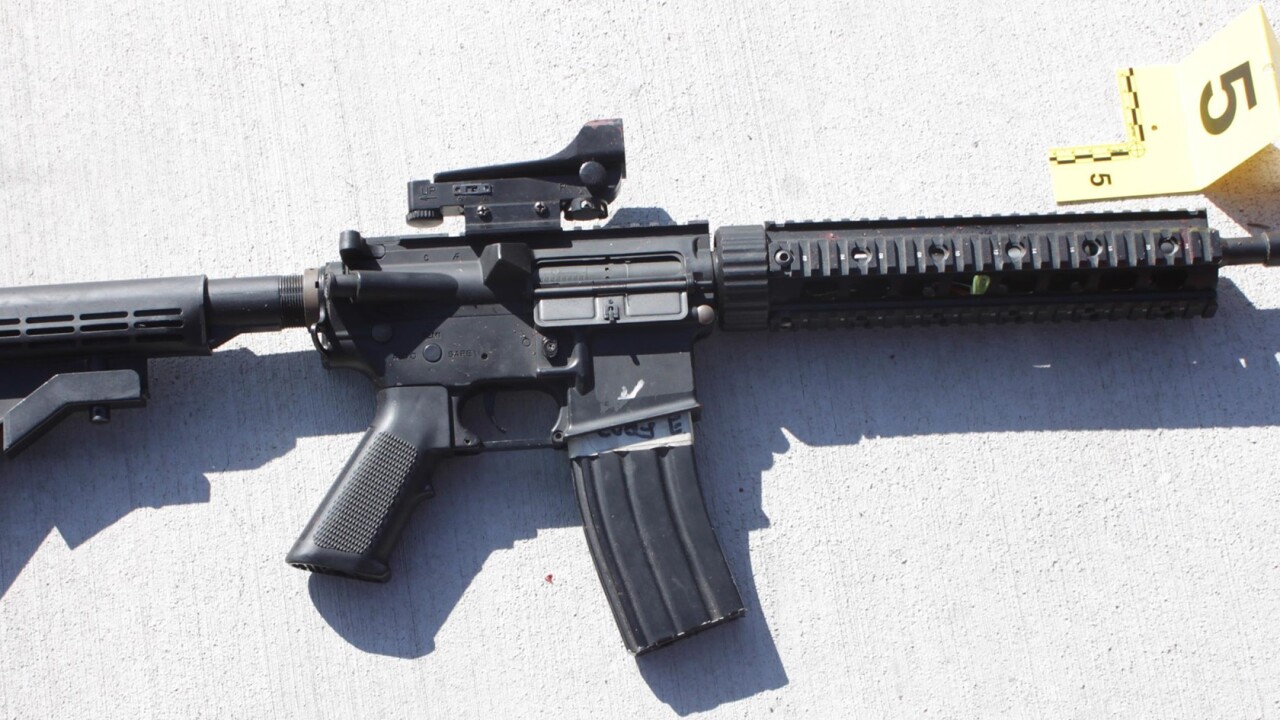 Police determined this to be an Airsoft BB gun after a man fleeing from police pointed it at officers and was shot and killed by police. Courtesy of Provo Police Department

PROVO, Utah -- One man is dead after an officer-involved shooting in Provo Sunday morning, and police said the man fled from police, feigned ramming a police vehicle, and eventually engaged with police while wearing a tactical vest and carrying an AR-15 style rifle--which police later determined was an Airsoft BB gun.

Police tell FOX 13 News that the Airsoft rifle should have had an orange tip to indicate it is a BB gun rather than a firearm, but they said it appears that the suspect had removed the orange tip from the rifle, which is pictured below. Airsoft BB guns are often modeled to look like realistic firearms, which is why the orange safety tips are a requirement.

At approximately 7:59 a.m., police responded to a domestic violence call. Officers located a male suspect, later identified as 24-year-old Cody Evans of Springville, at Paul Ream Wilderness Park, 1600 W. 500 North, where he had barricaded himself in his truck, said Lt. Brandon Post with Provo police.

While in his truck, Post said, the suspect grabbed what appeared to be an AR-15 style rifle. A press release from police states Evans, "racked the charging handle on the rifle" and then told officers he was going to ram their cars. He began revving his engine, and officers attempted to box the man in by putting spike strips down in front of the truck.

Evans escaped the area by driving through neighborhood yards. Post said officers ended the pursuit for safety reasons after the suspect feigned ramming an officer and ran a red light.

Post said Evans was in an outbuilding. When he came out of the structure to get back to his truck, Post said, the suspect was wearing a tactical vest. Officers ordered the man to stop and show his hands, but the suspect instead ran to his truck, opened the door and pulled out the rifle spotted earlier.

Police determined this to be an Airsoft BB gun after a man fleeing from police pointed it at officers and was shot and killed by police. Courtesy of Provo Police Department

A press release states the suspect, "then immediately pointed the rifle at officers who engaged him." Police fired, and the suspect died at the scene. Police stated later Sunday that the officers were about 100 feet away from the man when he pointed the rifle at them, and a total of three shots were fired by police. It was not immediately clear how many of those rounds truck Evans.

The countywide officer-involved shooting team is in charge of the investigation and scene.

"All I know is this wasn't justified, Cody was a good kid, he had a big heart, loved his family, loved his kids," Bourque said.

Bourque said he and his brothers have had run ins with Provo Police in the past, and he said he believes those past incidents may have influenced or impacted how they treated Sunday's events.

Bourque also said Evans and his wife had a rocky relationship and were in the process of getting a separation.

"I think something to do with his wife pushed him, I don't know what it was," Bourque said.

Bourque said the last time he saw his brother was on Saturday, and he said he seemed perfectly fine. He said there was no indication the events of the following day could transpire.

He said: "His last Facebook post said, 'I measured my arms,' because he's been going to the gym, '19 inches this is the happiest I've ever been,' and for someone being the happiest they've ever been to getting gunned down, it's a shock."