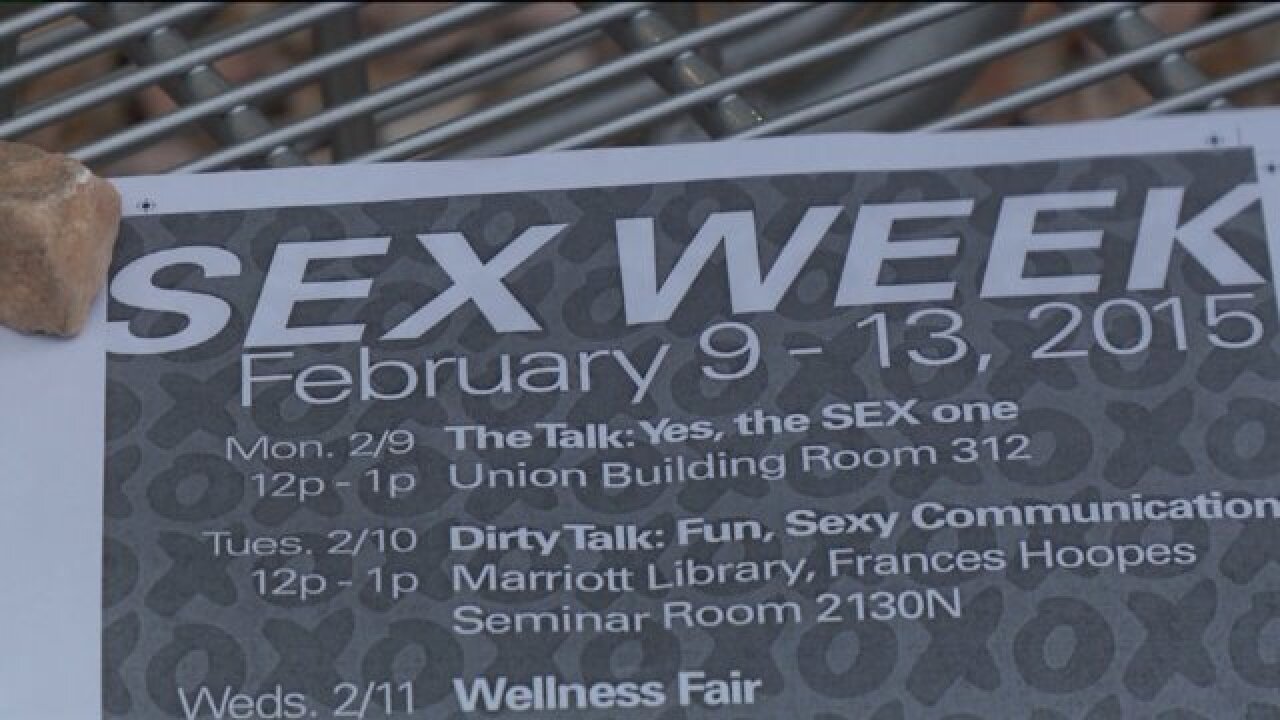 SALT LAKE CITY -- Does an upcoming event at the University of Utah encourage students to see each other as sex objects? One student groups feels that way, and they’ve asked the school to pull funding for “Sex Week.”

Sex Week is scheduled to get underway Monday at the U of U, and it will include a panel discussion about sexy communication, a film screening and a drawing for a year’s supply of birth control.

Natalie Green, President of Students for Choice, said, “ We promote education and awareness.”

Her group planned the university’s first ever Sex Week, and they patterned their event on similar events held at schools like Harvard.

“We promote healthy contraception, and so there will be condoms present,” Green said.

Panel discussions are planned, and so is a screening of the film “Obvious Child.”

“She chooses what's best for her and her life at that moment, and it is to have an abortion,” Green said of the film.

FOX 13 News spoke with students about the upcoming Sex Week.

Student Parker Scott said he thinks the flier gives off a pro-sex vibe, which is something he said he is OK with.

“Yeah, I mean, obviously everyone in college, we're over 18, we're adults, we can make our own decisions,” he said.

Cedar Gonzales, another student, spoke to the educational value of Sex Week.

“We're adults,” she said. “We need to be informed. We need to be smart about our decisions, and a lot of the time you don't get that in high school.”

Other students took a different view, and the co-presidents of a new group at the U of U called Right to Life said they believe Sex Week sends a dangerous message.

“Twenty-five percent of people are going to conceive a child when they have sex, and you have to understand those risks and be prepared in case it happens,” said Lauren Keeling, Right to Life co-president.

As the name implies, Right to Life favors adoption over abortion.

“You don't have to end the life of your child,” Keeling said.

The group has called on the university to either cancel Sex Week, or relocate it.

“Planned Parenthood is partnering with them, so we thought maybe rather than have it on the University of Utah campus, they could have it at Planned Parenthood,” said Sullivan Hughes, Students for Life co-president.

Green said she believes the event has a place on campus.

“I think that we are meeting a need on campus, and we followed the processes and protocols of the university, and I stand behind our event,” she said.

Members of Students for Choice said they're not interested in cancelling or moving, and the university says they won’t have to.

“Students for Choice went through the appropriate channels to get funded, and those include peer review from their fellow students,” said Katie Stiel, who manages programs for the Center for Student Wellness at U of U.

The Right to Life group has asked to put up a display at the wellness center during Sex Week in order to share their message, and that request has been granted.