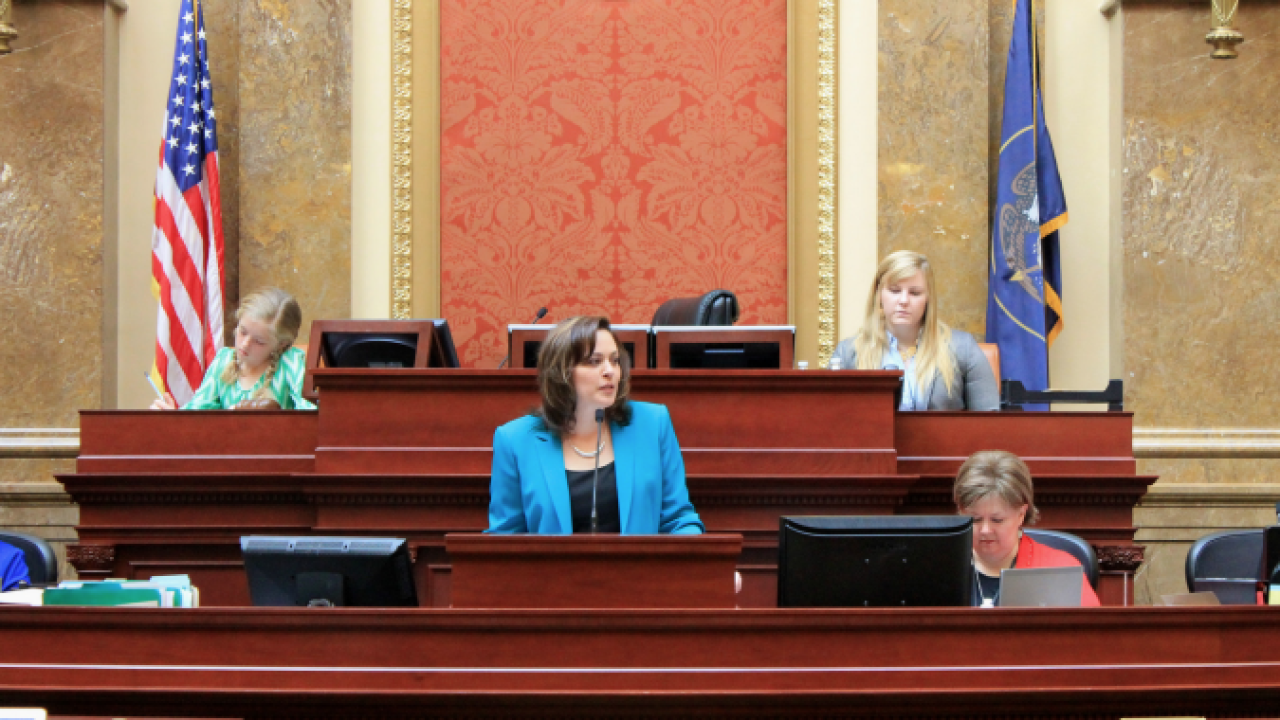 See the two videos above for a report on Lockhart's passing as well as a segment detailing her life and influence in Utah politics.

In a statement, the Lockhart family said she passed away at her Provo home around noon surrounded by friends and family. Lockhart died "from an unrecoverable and extremely rare neurodegenerative brain disease," the family said.

"She was at peace and surrounded by her family," said family spokesman Sen. Curt Bramble in the statement. "It's a credit to world-class doctors and Becky's indomitable spirit that they were able to have these past days together with her. The outpouring of prayers and positive thoughts continue to help sustain the family, and they thank everyone for their support."

At a news conference Saturday afternoon, doctors at University Medical Center and Lockhart's family disclosed that she had been diagnosed with the extremely rare Creutzfeldt-Jakob disease. They said it is a "one in a million" diagnosis and the Speaker initially sought treatment for vertigo. Click here for more information on CJD from the the Centers for Disease Control and Prevention.

"She was conscious when she was sent home and she was conscious until fairly recently," neurologist Dr. Jennifer Majersik told reporters. She said doctors did not believe it was a form of "mad cow" disease, but an autopsy has been ordered.

An emotional Sen. Bramble said there is no cure or treatment for CJD. Lockhart sought treatment for an inner-ear problem and "it went from there."

Asked how he would remember her, Sen. Bramble choked up as he said: "I think she was Utah's Iron Lady."

"I think she'll be remembered as one of the great leaders of the state of Utah," he said.

Lockhart died nine days after it was disclosed that she was critically ill. She is survived by her husband, Stan, and three children, Hannah, Emily, and Stephen; her parents, and four siblings.

Lockhart, a Republican who represented Provo in the Utah State Legislature for 16 years, ascended to Speaker of the House. She was the first woman to be House Speaker and was viewed as an inspiration for women to serve in politics regardless of their political affiliation.

Lockhart was known for her "consensus-building" style in the House caucus, but also for her grit and determination. She was widely believed to be a candidate for governor in 2016, and most recently sought to be the state schools superintendent.

In a statement, incoming House Speaker Greg Hughes, R-Draper, said "her unwavering commitment to Utah's school children, economic development and the bolstering of Utah’s transportation infrastructure will be felt for generations."

“Utah lost one of its finest today. I’m heartbroken for Stan and the Lockhart family. Few in this state will ever fully appreciate Becky Lockhart’s efforts on behalf of the citizens of Utah. Her unwavering commitment to Utah's school children, economic development and the bolstering of Utah’s transportation infrastructure will be felt for generations.

While it is hard to understand how someone so good and so young could be taken from us, we can cherish the experiences and associations we had with Becky. She was a great leader and a dear friend and she will be deeply missed.”

Governor Gary Herbert said in a statement Saturday he was "terribly saddened" by Lockhart's death.

“I have known and been a friend of the Lockhart family for 25 years and I am terribly saddened by the news of Becky’s sudden and unexpected passing.

“Speaker Lockhart was a tremendous public servant who spent more than a decade and a half in the Utah House of Representatives and she made history as Utah’s first female House Speaker. While she was first and foremost a wonderful wife and mother, she was also a remarkable role model, particularly to the untold numbers of women who were inspired by her example to be involved in public service. The state of Utah is a better place because of the service and sacrifice of Stan and Becky Lockhart.

“Jeanette and I join with all Utahns in expressing our deepest sympathies to the Lockhart family and we are keeping them in our thoughts and prayers during this difficult time.”

Read the statement from the Utah GOP here:

"I want to extend my deepest condolences to the family and loved ones of Speaker Becky Lockhart. Both Stan and Becky are my friends and I'm truly brokenhearted. As the first woman Speaker of the Utah House, Becky made history and made Utah a better place. She will be remembered for her distinguished service to our state and dedication to her family and friends. I pray that her loved ones find peace and comfort during this challenging time.”

Across the aisle, Utah Democratic Party chairman Peter Corroon called Lockhart "a stateswoman at a time when too many people are focused on politics."

Read the statement from the Utah Democratic Party here:

“Speaker Lockhart was an icon, a role model, and a stateswoman at a time when too many are focused on politics.   All Utahns could count on her to listen and ensure that everyone had a seat at the table.  I appreciated working with her at Salt Lake County and the Utah Democratic Party, and am deeply saddened by this loss for our community.  Our thoughts and prayers are with Speaker Lockhart’s family.  She will be missed.”

Rep. Mia Love said Lockhart has been an inspiration to women in Utah, and she said as a result many of Utah's mothers and patriots have found their voice.

"I am truly saddened by the sudden illness and death of former Utah Speaker of the House Becky Lockhart. Becky and her husband Stan have been good friends to me, both before and during my journey into politics. Becky’s leadership is an inspiration to women in Utah.  As the first female Speaker of the House in Utah, and as a legislator, her work on behalf of fiscal responsibility, transportation, and other issues commanded the respect of members of Utah’s House and Senate. She wasn’t afraid to take a stand.  In her own inspiring words:

'Using your real voice might make you uncomfortable.  It might make the people around you feel uncomfortable, but until we make it normal for women to be heard, until we are heard for our ideas and not viewed as tokens, that’s the price we’ll pay.  I for one, have been willing to pay that price.'

Because of Becky’s courage,  many of Utah’s mothers and patriots across this country have found our voice, and are willing to pay that same price for life, liberty and the pursuit of happiness.

Our hearts go out to the Lockhart family.  We love you Becky."

The Office of the Attorney General said Lockhart's contributions to Utah cannot be overlooked and her legacy will not soon be forgotten.

Read the statement from the Utah Attorney General's Office here:

Today, those in the Office of the Utah Attorney General mourn the passing of former Speaker of the House, Rebecca D. Lockhart, and extend our most earnest sympathies to her family. Utah has lost a tremendous leader and individual. Her contributions to the state cannot be overlooked and her legacy will not soon be forgotten.

Utah Attorney General Sean Reyes also released a more personal statement, saying Lockhart was "like a big sister" to him.

Read the statement from Reyes here:

"On a personal level, I am devastated.  Becky was more than just a colleague and friend.  She was like a big sister.  My heart aches for Stan, Emily, Hannah and Stephen and their extended family and I pray with great hope for God’s light to comfort them in their sorrow."

Eric Hawkins, a spokesman from The Church of Jesus Christ of Latter-day Saints, said Lockhart championed issues while serving as a model mother and wife to her family.

Read the statement from the LDS Church here:

"We extend our deepest sympathy and prayers to the family and friends of Becky Lockhart.  As the first female speaker of the Utah House, she passionately championed issues to strengthen Utahns while serving as a model mother and wife to her own family."

Read the statement from Holland here:

"The state of Utah has lost one of its great leaders and public servants in the prime of her life. We, as a university, have lost one of our staunchest champions. I, like so many, have lost a dear friend. Most importantly, the Lockhart family has lost a remarkable mother and spouse, and my thoughts and prayers remain with Stan and the entire Lockhart family."

Salt Lake County Mayor Ben McAdams said he admired Lockhart's talent and her energy and her efforts to represent the citizens of Utah.

Read the statement from McAdams here:

"I was deeply sorry to learn that the sudden illness that struck Becky was so devastating. I know that she was already moving forward with new plans and goals for public service, after finishing her tenure in the Utah Legislature.

My thoughts and prayers are with the Lockhart family. Becky Lockhart and I became friends during our service together in the legislature. Sometimes we disagreed, but we could always go to dinner and explore ways to find agreement or just enjoy our friendship.

I admired her talent and her energy and appreciated how much time and effort she gave to representing the citizens of Utah. Her family, friends and community members have suffered a great loss."

Others around Utah who knew Lockhart took to Twitter to express their condolences and appreciation for Lockhart's example. See the tweets below for those reactions.

I am heartbroken that my friend and mentor Becky Lockhart has passed away.Way too soon. My heart is with @stantheman87 and their kids #utpol

BOARD STATEMENT: We express sincere sadness at the passing of former Speaker Becky Lockhart... http://t.co/KRAPmVYiUM #uted

@beckylockhart was an inspiration to an entire generation of #ladypoliticos. My heart goes out to her family #utpol #utleg

God be with the Lockhart family. #utpol

We extend our deepest condolences to Speaker Lockhart’s family. She was a trailblazing inspiration and an exemplary public servant. #utpol

Very sorry to hear about @beckylockhart's passing. We had a moment of silence at our bootcamp. She will be missed. #utpol