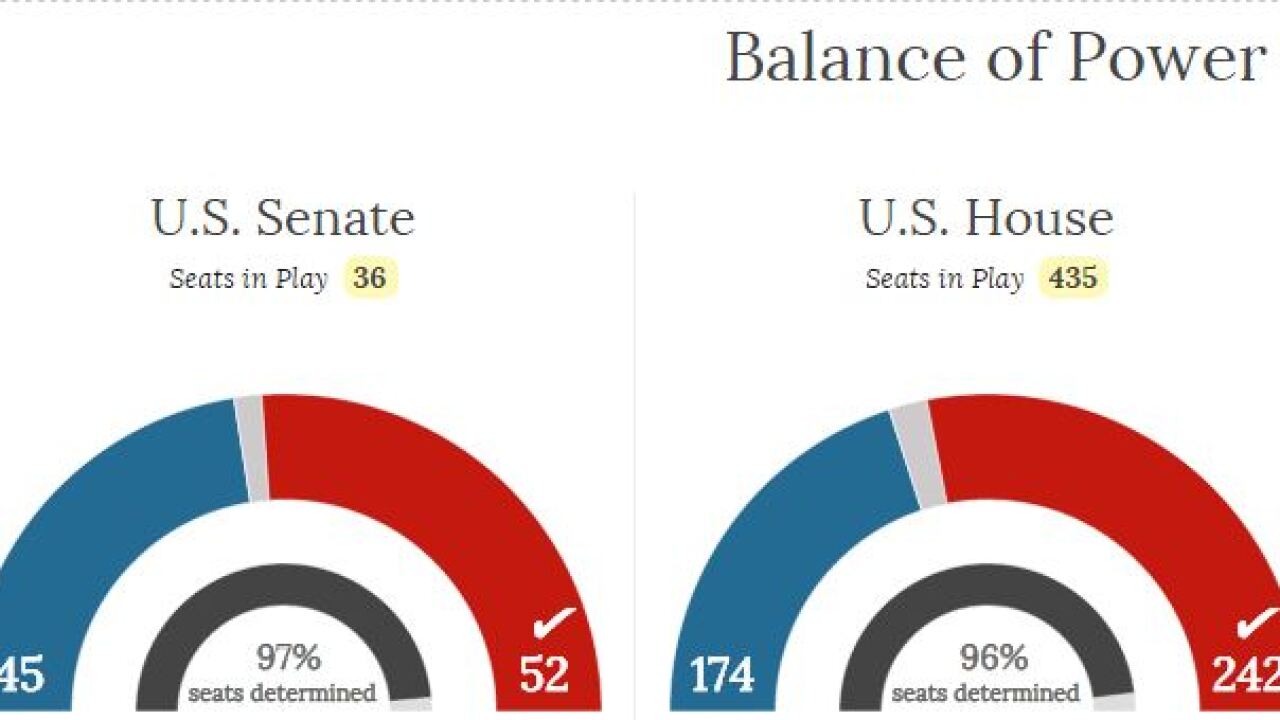 A Republican tide ripped the Senate away from Democrats Tuesday, giving the GOP full control of Congress and the power to pin down President Barack Obama during his last two years in office.

The thumping win upends the balance of power between the White House and Capitol Hill only six years after Obama’s Democrats swept to power and marginalized Republicans in a rush to reform health care, Wall Street and pass a huge stimulus package.

Now, it’s Democrats who will take the back seat on Capitol Hill, relying mostly on the power of the filibuster to stymie Republicans and keep Obama’s legacy intact.

“For too long, this administration has tried to tell the American people what is good for them and then blame somebody else when their policies didn’t work out,” Mitch McConnell, who is expected to become the next Senate majority leader, said in a victory speech.

In the House, the GOP now has 242 seats, its largest majority since World War II.

Speaker John Boehner, celebrating a widened majority, said he is “humbled by the responsibility the American people have placed with us.”

“But this is not a time for celebration,” he said. “It’s time for government to start getting results and implementing solutions to the challenges facing our country, starting with our still-struggling economy.

Senate Majority Leader Harry Reid, who has controlled the Senate since 2007, congratulated Republicans on their victory.

“The message from voters is clear: they want us to work together,” Reid said. “I look forward to working with Senator McConnell to get things done for the middle class.”

But there was silence from the White House after Tuesday’s results became clear.

Obama will make a public statement Wednesday on an election many will see as a repudiation of his presidency, and he will host bipartisan leaders on Friday to try to chart a way forward.

Democratic fears of a rout came true, as party candidates struggled to defend seats won in the 2008 Obama wave in conservative territory, and couldn’t get out from under an unpopular president limping through his second term.

The losses in Coloradoand Iowa will sting especially hard, as those two states enjoyed a fabled place in Obama’s world, as drivers of the president’s unlikely bid for the White House in 2008.

The GOP also piled up wins in Montana, South Dakota, Arkansas, West Virginia and North Carolina — all seats that had been in Democratic hands — to surpass their magic number of six net gains.

With seats still to be decided in Virginia, Alaska and Louisiana –where there will be a runoff in December — the GOP currently has 52 seats in the Senate.

Republican numbers stood up when the GOP managed to hold on to seats in Kansas and Georgia which had threatened to fall from their grasp and complicate the Senate math.

It was a night of almost unrelenting misery for Democrats:

–In Iowa, Iraq war veteran Joni Ernst became the first woman elected to Congress from her state, after turning around her Republican campaign with an ad in which she boasted about castrating hogs.

–In North Carolina, Democrat Kay Hagan was felled by Thom Tillis, who repeatedly pummeled her for standing shoulder-to-shoulder with Obama.

–Arkansas Sen. Mark Pryor lost Tom Cotton, who, like Ernst, is an Iraq war veteran. Pryor’s loss comes despite former president Bill Clinton’s efforts to save him in his beloved home state.

–Democrats thought they had Colorado, with its mix of young voters, Hispanics and students locked down for a generation. But Sen. Mark Udall tumbled to charismatic challenger Cory Gardner who shook off claims he was anti-women.

–Virginia Democratic Sen. Mark Warner is having a tougher ride than expected against Republican challenger Ed Gillespie in a state Democrats had thought was reliably theirs after Obama won it twice.

Republicans will now look with some optimism on the 2016 presidential election.

But Democrats will console themselves with a more favorable Senate map in two years time and the belief that shifting demographics and an unresolved war between the Republican grassroots and the party establishment will make the next presidential race a tough climb for the GOP.