Same-sex marriage in Utah: ‘We are 100% the snowball’s chance in Hell’ 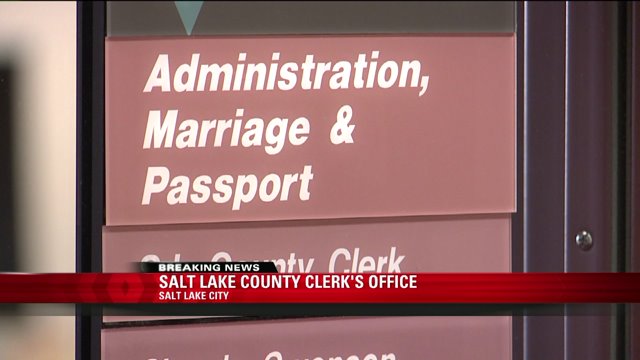 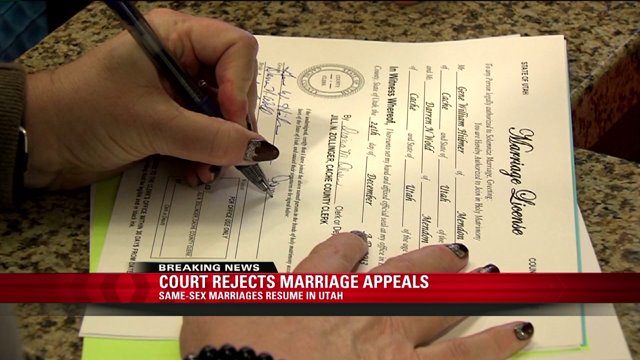 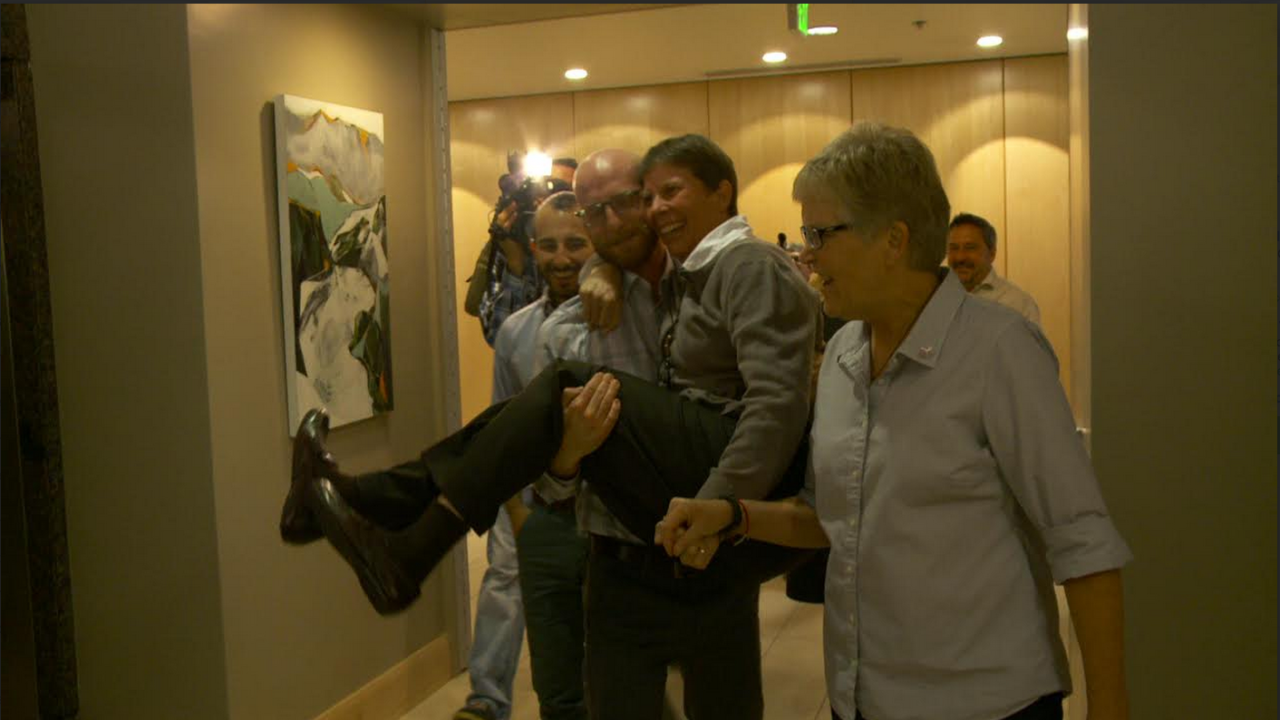 SALT LAKE CITY - Same-sex marriage is legal once again in Utah, after the U.S. Supreme Court declined to hear the state's appeal.

The nation's top court on Monday refused to hear cases from Utah, Oklahoma, Virginia, Wisconsin and Indiana. By declining to hear the petitions, the lower court rulings stand.

"What that means for us in Utah and all the states in the 10th Circuit, is we have marriage equality," cried Peggy Tomsic, the attorney for three gay couples who sued over Utah's ban. "It's an incredible thing that we've done!"

The court had met last week to consider same-sex marriage cases, including Utah's Amendment 3. The rejection of the case by the court stunned Tomsic.

"We are the 100-percent snowball's chance in hell," she said of same-sex marriage in Utah.

Governor Gary Herbert was more somber, stating at a news conference that he believed states should still have the right to define marriage.

"I was surprised about this and disappointed," the governor said. "I believe that the people deserve to have this hearing taking place at the Supreme Court level to determine what is a significant issue of our time."

Still, the governor directed state agencies to comply with the decision by the nation's top court. That includes joint tax returns, adoptions and name changes.

"We wish that they and their teams would, with all professionalism, make sure they recognize all legal marriages," Reyes said.

By mid-morning, the 10th U.S. Circuit Court of Appeals had issued a mandate lifting the stay on same-sex marriage.

Read the order from the 10th U.S. Circuit Court:

At county clerk's offices, same-sex couples trickled in to obtain marriage licenses. It was nowhere near the flood that occurred when Amendment 3 was originally overturned last year.

Three gay and lesbian couples sued the state over Amendment 3, which defined marriage as between a man and a woman and did not recognize anything else. U.S. District Court Judge Robert Shelby ruled in December 2013 that it violated the Fourteenth Amendment to the U.S. Constitution.

Utah appealed to the 10th U.S. Circuit Court in Denver, which also ruled Amendment 3 unconstitutional. The state then asked the U.S. Supreme Court to consider it -- a move supported by the plaintiffs themselves.

"The whole point is that every American citizen deserves the right to marry. So this battle is not over," said Moudi Sbeity, one of the Amendment 3 plaintiffs. "We are happy that we can get married here in our home state and we don't anticipate moving anywhere anytime soon, but we just hope that our fellow citizens will have the same right we do now."

Gov. Herbert told FOX 13 that he estimates Utah spent as much as $600,000 to appeal Amendment 3.  He believed it was money well spent.

"I think it's important that we in the executive branch uphold the laws put on the books by the people of Utah," the governor said. "We're not making any moral pronouncements here."

The U.S. Supreme Court's decision not to hear the cases brings the number of states with same-sex marriage now to 30. Tomsic said it would be very difficult to undo it, likening it to "trying to put the toothpaste back in the tube."

There is a lawsuit pending over same-sex marriages already performed in Utah. ACLU of Utah Legal Director John Mejia told FOX 13 that technically, it was still pending with the Utah Attorney General's Office due to file a response this week.

"As a practical matter, I'm not sure there's much left to hash out here," Mejia said, noting that the remedy they sought on behalf of married same-sex couples was state recognition.

The governor and attorney general called for civility among both sides of the social issue going forward.

"It's time for people on both sides of the issue to come together now and heal any rifts that occurred," Reyes said. "We are all Utahns and I hope we will all exercise a great deal of kindness, caring and understanding."

As she held her wife Laurie Wood's hand, Kody Partridge echoed that call.

"This is a time to celebrate, to reach out to families, to show love and respect and continue the discussion," Partridge said. "I don't think we have to have anything but love and respect for each other."

In a statement, The Church of Jesus Christ of Latter-day Saints, said same-sex marriage would not affect its doctrinal positions or practices, but "the courts have spoken."

The succession of federal court decisions in recent months, culminating in today’s announcement by the Supreme Court, will have no effect on the doctrinal position or practices of The Church of Jesus Christ of Latter-day Saints, which is that only marriage between a man and a woman is acceptable to God. In prizing freedom of conscience and Constitutional guarantees of the free exercise of religion, we will continue to teach that standard and uphold it in our religious practices.

Nevertheless, respectful coexistence is possible with those with differing values. As far as the civil law is concerned, the courts have spoken. Church leaders will continue to encourage our people to be persons of good will toward all, rejecting persecution of any kind based on race, ethnicity, religious belief or non-belief, and differences in sexual orientation.

As they left their lawyers' office, Amendment 3 plaintiffs Derek Kitchen and Moudi Sbeity hugged and kissed.

"This is just a big day for us!" he said. "We can finally plan our wedding."

Kate Call, one of the plaintiffs in the Amendment 3 case, told FOX 13 the ruling meant she could make end-of-life decisions with her wife, Karen Archer, who has a terminal illness.

"This is a great relief to us as a couple," Call said. "Because we can now not have uncertainty about what will happen when she or I die."