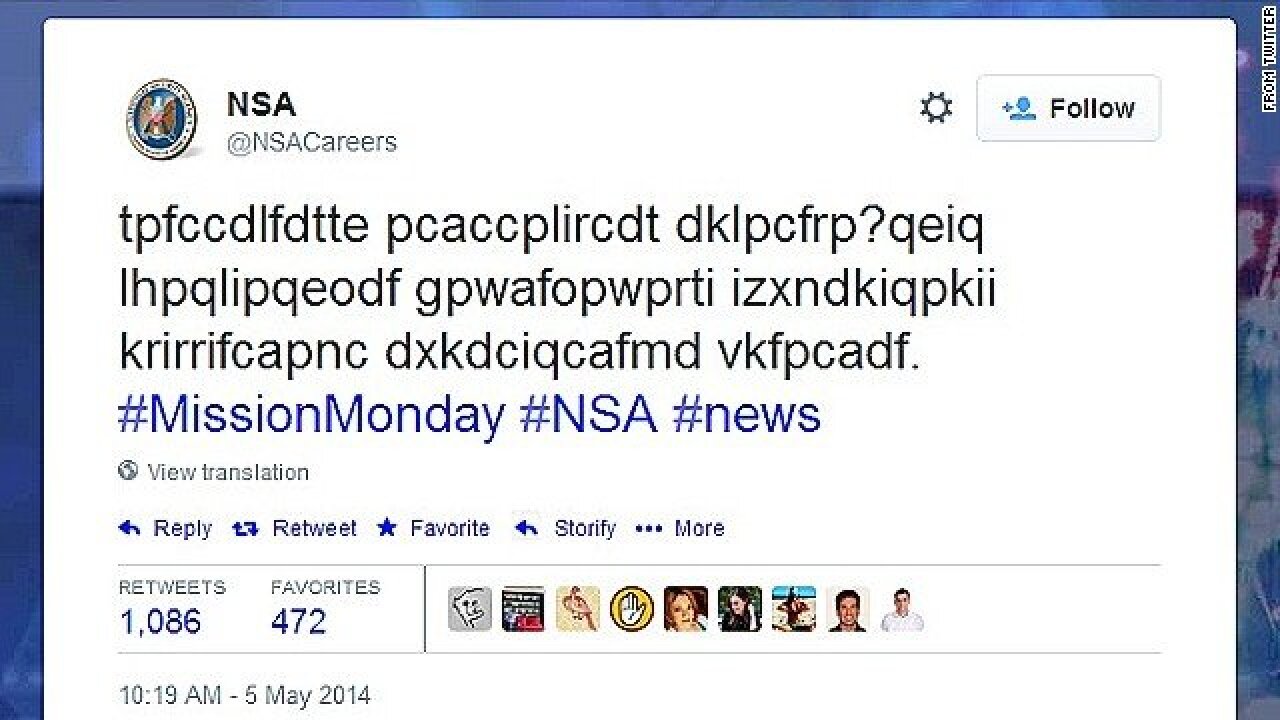 The truth proved to be less scandalous. Internet sleuths, armed with cryptogram-solving Web tools, solved the mystery in minutes. Turns out the nonsensical tweet was a coded recruiting pitch by the NSA, which is seeking code breakers to help decipher encrypted messages from potential terrorists.

(CNN) -- When the National Security Agency sent a tweet Monday filled with garbled nonwords like "tpfccdlfdtte," the Internet was confused, and intrigued.

Was the NSA drunk? Had a cat skittered across someone's keyboard?

Or maybe the spy agency, under fire for eavesdropping on Americans, had accidentally blurted a secret of its own -- a coded, classified message not meant for public eyes.

The truth proved to be less scandalous. Internet sleuths, armed with cryptogram-solving Web tools, solved the mystery in minutes. Turns out the nonsensical tweet was a coded recruiting pitch by the NSA, which is seeking code breakers to help decipher encrypted messages from potential terrorists.

The tweet was a basic "substitution cipher," a code in which each letter of the alphabet is replaced by another.

Translated, it read (SPOILER ALERT for all you wannabe codebreakers): "Want to know what it takes to work at NSA? Check back each Monday in May as we explore careers essential to protecting our nation."

When contacted by CNN, NSA spokeswoman Marci Green Miller said the Twitter account is run by the NSA recruitment office, which will post coded tweets each Monday for the rest of the month.

"NSA is known as the code makers and code breakers," said Miller, who called the tweet "part of our recruitment efforts to attract the best and the brightest."

If the intelligence agency wanted attention, it worked. Monday's message has been retweeted more than 1,100 times, and most major media outlets have run articles about it.

In its efforts to attract top talent, the NSA has been known to recruit hackers and other computer wizards at cybersecurity conferences. The agency even set up a special page to woo attendees of DefCon, a shadowy hackers' conference held each July in Las Vegas.

A job with the NSA requires a security clearance, of course. But the agency seems eager to recruit smart people -- even, perhaps, those with minor arrest records.

"If you have a few, shall we say, indiscretions in your past, don't be alarmed. You shouldn't automatically assume you won't be hired," said the recruiting page. "If you're really interested, you owe it to yourself to give it a shot."

Matthew Aid, who wrote a book about the NSA , told CNN last year that NSA hackers focus on foreign militaries, governments and corporations, and are protected by multiple levels of secrecy.

Monday's tweet was not the first time the NSA has sent a coded message on Twitter. But it might signal a renewed effort by the agency to attract new blood in the wake of revelations last year by leaker Edward Snowden that it ran a secret surveillance program to intercept Americans' phone calls and Internet messages.