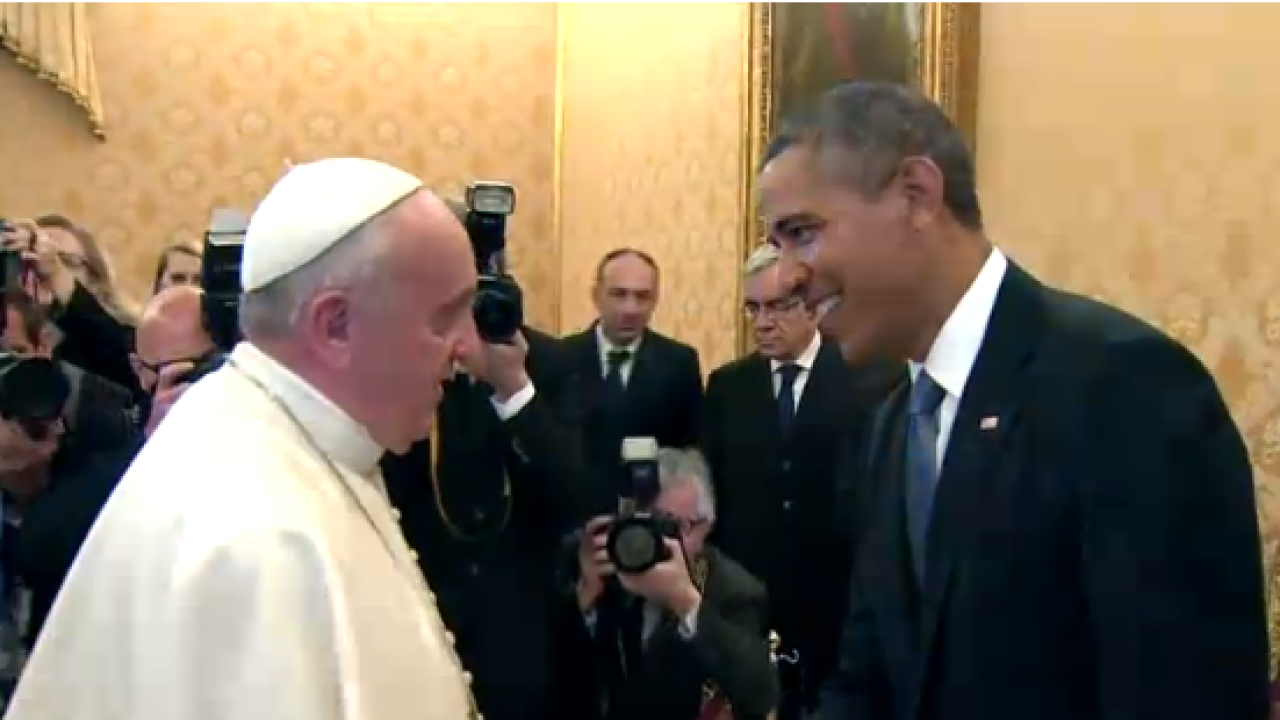 U.S. President Barack Obama and Pope Francis met for the first time at Vatican City. The two world leaders greeted each other with a smile and a handshake, and posed for pictures before sitting down across a table from each

(CNN) — President Barack Obama gave Pope Francis a bag of seeds as a gift, a fitting token as their first-ever meeting provided a fresh start of sorts between the administration and Catholic leadership after years of strained relations.

“These, I think, are carrots,” Obama told the Pontiff, showing him one pouch. The seeds were inside a box made from timber from the first cathedral to open in the United States, in Baltimore.

The two world leaders greeted each other with a smile and a handshake, and posed for pictures before sitting down across a table from each other.

It was an important meeting that had its share of light moments.

The President at one point quipped, “His Holiness is probably the only person in the world who has to put up with more protocol.”

The goal of the meeting: Focus on areas where two of the world’s most influential men agree and gently tread ground where they differ.

In an interview with the Italian newspaper Corriere della Sera, Obama pointed to the Pope’s concern for income inequality, saying, “Given his great moral authority, when the Pope speaks it carries enormous weight.”

Continuing to focus on income inequality, Obama said, “And it isn’t just an economic issue, it’s a moral issue. I think the Pope was speaking to the danger that over time we grow accustomed to this kind of inequality and accept it as normal. But we can’t.”

The President said he admires the Pope’s courage to speak out on economic and social issues.

“It doesn’t mean we agree on every issue, but his voice is one that I think the world needs to hear. He challenges us,” Obama told the newspaper. “He implores us to remember the people, especially the poor, who are affected by the economic decisions we make.”

The law exempts churches and houses of worship from the requirement, but nonprofit, religiously affiliated groups are required either to provide contraception coverage to their employees directly or through a third-party insurer.

The U.S. Conference of Catholic Bishops has been vocal in its opposition to the provision, said Sister Mary Ann Walsh, a spokeswoman for the organization.

“Religious liberties and right-to-life issues are a concern,” she said of the tension between American Catholic leadership and the administration. However, “the U.S. bishops have appreciated the administration’s cooperation on issues of mutual concern.”

Those areas of “mutual concern” include immigration and poverty — issues where the President and the Pope could find common ground.

Francis underscored his commitment to the plight of immigrants during a trip last year to the Italian island of Lampedusa, a place where thousands of African migrants desperately fleeing political upheaval and poverty pour onto European shores. Many die in the attempt to cross.

Next month, a group of American Catholic leaders, including Cardinal Sean O’Malley, the archbishop of Boston, will follow suit and travel to the U.S.-Mexico border to highlight immigration concerns.

On Wednesday, the administration renewed its public call for immigration reform by backing an effort by House Democrats to force a vote on the matter.

“Immigration reform is the right thing to do for our economy, our security, and our future,” the White House said in a statement.

Tensions between the administration and many leaders in the American Catholic community began early in the President’s tenure over his support for abortion rights.

A number of bishops criticized the University of Notre Dame’s decision in 2009 to award Obama an honorary law degree and invite him to give the commencement address.

Relations frayed further over the contraception coverage requirement in Obamacare, leading the U.S. Conference of Catholic Bishops to pan the law.

“It was a very tough year,” said Christopher Hale, a senior fellow with Catholics in Alliance for the Common Good who helped lead national Catholic outreach for Obama’s 2012 re-election campaign. “It was hard to find any reasonable Catholic who thought the Health and Human Services mandate was handled well.”

Differences over same sex-marriage only added to the strained relationship.

Religious experts said Francis would not have been likely to wade into politically charged conversations during the meeting.

“The Vatican has to be very careful to not create a gap between what they’re saying and the bishops are saying,” Schneck said. “They will be very careful not to undercut the American bishops in that regard.”

The meeting with Francis, whose approval ratings are in the high 80s, might also boost Obama in that regard. His standing with the public has hovered in the low 40s.

After all, the Pope’s name and quotes have been invoked in everything from discussions over unemployment insurance, the minimum wage and the bigger issue of income inequality.

“If I was advising President Obama, I would say the No. 1 spokesperson on American immigration reform should be Pope Francis,” Hale said. “He has so much capital in this city. You have Catholics, Jews and atheists on the Hill quoting him.”

House Speaker John Boehner, an Ohio Republican and a Catholic, recently invited the Pope to address a joint session of Congress.

“Everybody on the planet would like to have their picture taken with the Pope these days,” Schneck said. “One of the things that would delight Obama is if some of that popularity would rub off. Given the President’s current low numbers, he is hoping for a bit of a boost.”