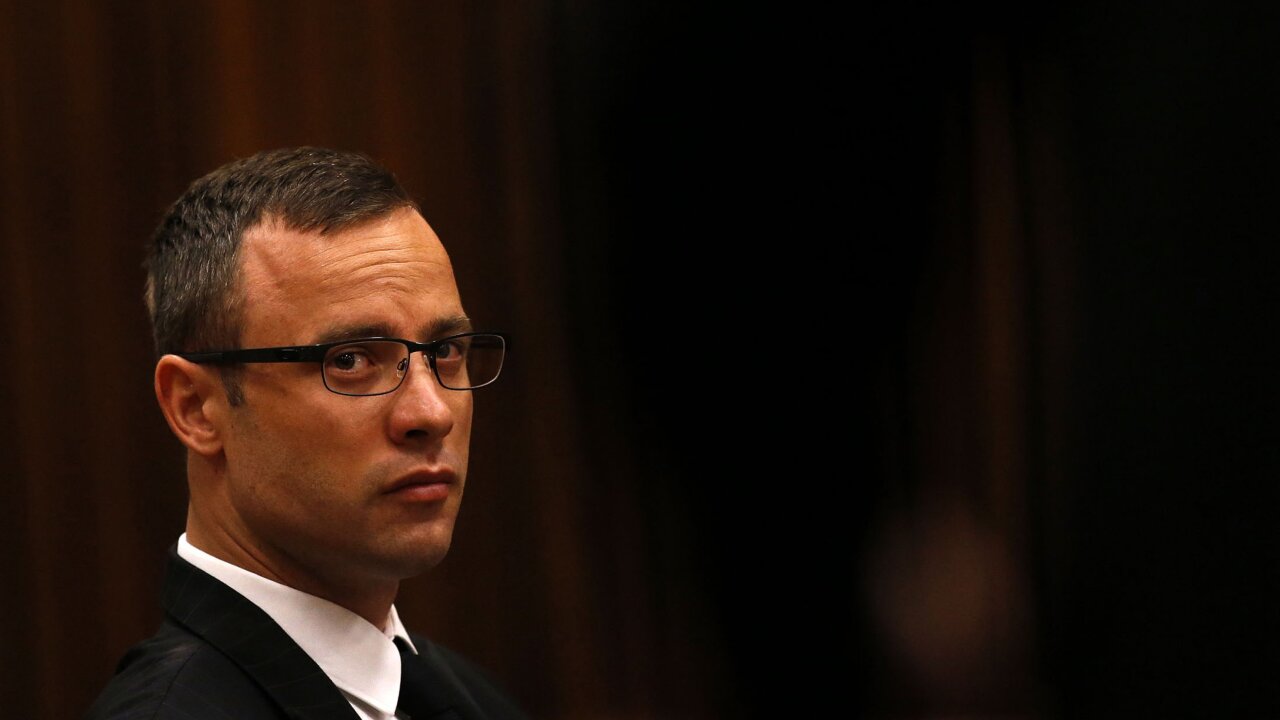 Paralympian Oscar Pistorius sits in the dock during his trial for the murder of his girlfriend Reeva Steenkamp at the North Gauteng High Court in Pretoria on Tuesday, 25 March 2014. Picture: Esa Alexander/Times Media Group/Pool

Police downloaded chat messages between Pistorius and Steenkamp after the Olympic sprinter killed the model last year. He denies murder, saying he thought she was an intruder.

Among them were chat messages from Steenkamp in which she called her boyfriend pet names including Boo, Baba, Baby, rockstar and angel, and signed off with kisses.

In one exchange, she asks Pistorius’ advice on whether she should wear a leopard print dress. He replies, “Ja I love that and you look amazing in it.”

A day earlier, Moller had read the court a message in which Steenkamp said she was afraid of Pistorius and his temper.

“I’m scared of you sometimes and how u snap at me and of how you will react to me,” she texted him in a long WhatsApp message less than a month before she died, according to the police cell phone expert who examined her iPhone.

That message grabbed headlines in reports from court Monday. But Roux highlighted Tuesday that loving chat messages resumed on the same day. Roux said this suggested any disagreements the couple had were swiftly resolved.

He highlighted that only four of the 1,709 chat messages between Pistorius and Steenkamp were arguments.

He responded: “Thank you so much for being strong angel that message means a lot. I’m going to take your advice…miss you x”

In another chat, she offered to cook dinner for him on Valentine’s Day.

Roux also was allowed by the judge to show CCTV footage of Steenkamp and Pistorius at a shop that shows them acting as a loving couple on February 4.

Before the defense began its cross-examination, Moller testified that Pistorius’ iPhone was was online for 309 seconds from 1:48 a.m. on February 14. Steenkamp was killed around 3:15 a.m. on that day.

Moller said Steenkamp’s phone also showed internet activity from February 13 to after she died. Questioned by Roux, he said such activity could be explained by an app updating or e-mails being received.

Questioned by the prosecution, Moller listed in order the calls made and received by Pistorius after he shot Steenkamp.

Pistorius then received a call from security, before calling his friend Justin Divaris and his brother, Carl, the police officer said.

Trouble between the loving texts

Moller said Monday that 90% of the downloaded chat messages between Pistorius and Steenkamp were normal and loving. But there were several that accused Pistorius of jealousy and possessiveness.

“You have picked on me incessantly since you got back from CT (Cape Town) and I understand that you are sick but it’s nasty… I was not flirting with anyone today. I feel sick that you suggested that and that you made a scene at the table and made us leave early,” Steenkamp wrote on one occasion to Pistorius.

“I just want to love and be loved. Be happy and make someone SO happy. Maybe we can’t do that for each other. Cos right now I know u aren’t happy and I am certainly very unhappy and sad,” she said at the end of the long text on January 27, 2013.

“I was upset that you just left me after we got food to go talk to a guy, and I was standing right behind you watching you touch his arm and ignore me. And when I spoke up you introduced me which you could’ve done but when I left you just kept on chatting to him when clearly I was upset,” Moller read into the court record on Monday.

Less than a week before he killed her, Steenkamp wrote to Pistorius about an incident where they left a public event together.

“I completely understood your desperation to leave and thought I would be helping you by getting to the exit before you because I can’t rush on the heels I was wearing,” she wrote on February 8, 2013.

“I didn’t think you would criticize me for doing that especially not so loudly so that others could hear. I might joke around and be all Tom boyish at times but I regard myself as a lady and I didn’t feel like one tonight after the way you treated me when we left,” she wrote.

Pistorius admits he killed Steenkamp less than a week later, firing four shots through a closed door in his house in the early hours of February 14, 2013. Three hit her, with the last one probably killing her almost instantly, according to the pathologist who performed the autopsy.

But Pistorius says he thought she was a nighttime intruder in his pitch-black house and believed he was firing in self-defense. He pleaded not guilty to murder.

The trial was scheduled to last until March 20 but will now continue until the middle of May, the South African court hearing the case said Sunday.

The trial, which entered its fourth week on Monday, will continue until April 4, then break for a recess before resuming from April 14 until May 16, the Pretoria court announced in a written statement. It said “all parties involved” had agreed to the dates. The trial began March 3.

Pistorius first achieved global fame as an outstanding double amputee sprinter who ran with special prostheses that earned him the nickname “Blade Runner.”

Judge Thokozile Masipa will decide the verdict with the help of two lay people called assessors. South Africa does not have jury trials.

In South Africa, premeditated murder carries a mandatory life sentence with a minimum of 25 years. Pistorius also could get five years for each of two unrelated gun indictments and 15 years for a firearms charge he also faces.

If he isn’t convicted of premeditated murder, the sprinter could face a lesser charge of culpable homicide, a crime based on negligence.

The sentence for culpable homicide is at the judge’s discretion.

There has been intense media interest in the case in South Africa and beyond.

Almost the entire trial has been televised, though individual witnesses can choose — and many have — not to be shown on television.