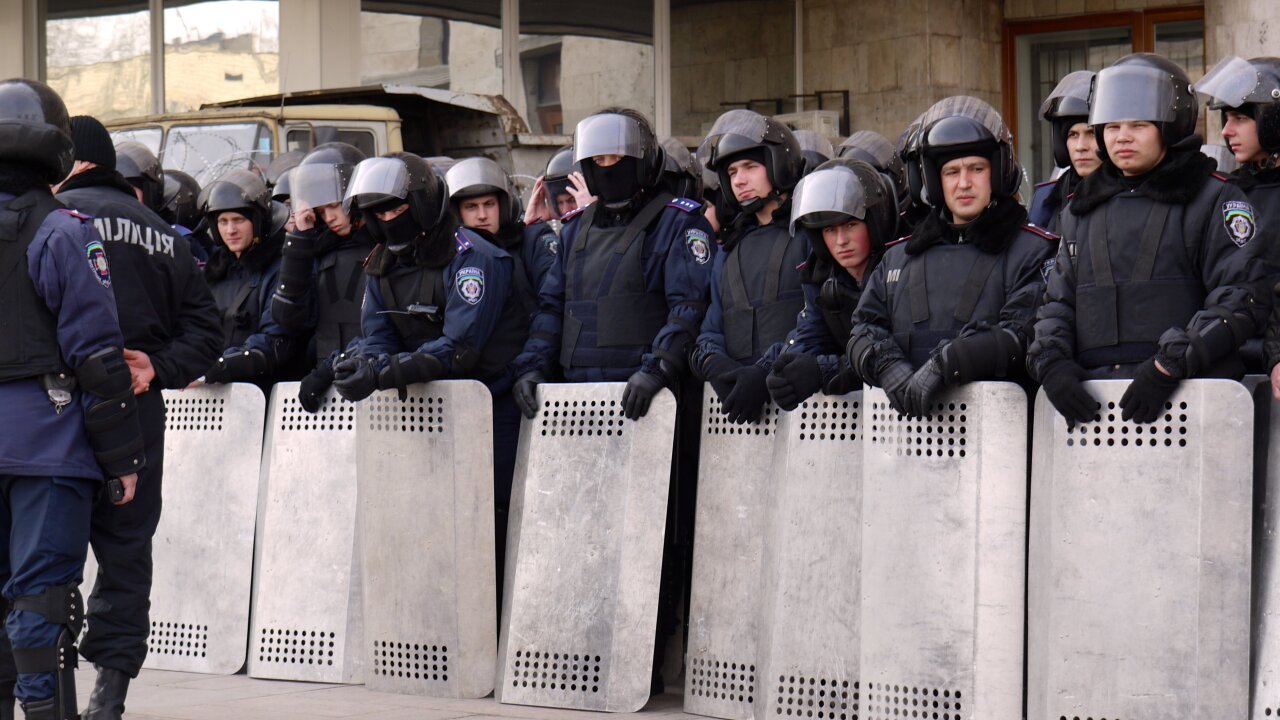 Riot police in the eastern Ukraine city of Donetsk stand guard outside a government building which houses the Donetsk Regional Administration Offices.

SIMFEROPOL, Crimea (CNN) — A day after Russia claimed Crimea as its own, there are signs the uneasy standoff between pro-Russian and Ukrainian forces could ignite into bloody conflict.

“They are everywhere here, they surround us, they threaten us,” she said, adding that she was sure that Russian security forces were involved.

Kanalyuk said the 70 or so Ukrainian naval officers at the headquarters had tried to stop the armed men from entering and were now negotiating with them. So far, no shots have been fired, she said.

A little later, Vladislav Seleznyov, Defense Ministry spokesman in Crimea, said Ukrainian navy chief Sergey Gaiduk had been taken from the navy headquarters by a group of people.

The men replaced flags on the masts with the Russian and St. Andrew’s flag, the naval flag of the Russian Federation, Russia’s official Itar-Tass news agency reported. It denied any involvement by Russian military.

The incident comes a day after one member of the Ukrainian military was killed, another wounded and more captured when masked gunmen seized their base near the Crimean regional capital, Simferopol.

In the wake of that fatality — the first Ukrainian military death since the Crimea crisis erupted about two weeks ago — Ukraine’s defense ministry authorized its forces to open fire.

And Prime Minister Arseniy Yatsenyuk warned that the crisis was shifting “from political to the military form, and the blame is on the Russian military.”

It’s not clear whether they will be able to gain access to the region. International observers have been turned away from Crimea in recent days and flights have also been limited.

The contested referendum has been condemned by the interim Ukrainian government in Kiev, the United States and the European Union.

Putin: Crimea has always been Russian

The step clears the way for the country’s lawmakers to vote on ratifying the accession agreement, as well as draft amendments to the Russian constitution, in the coming days, it said.

Putin made it clear Tuesday, in a speech greeted by enthusiastic applause by Russian lawmakers, that Moscow has no intention of relinquishing its grip on Crimea, a Black Sea peninsula with historical ties to Russia.

“In our hearts, we know Crimea has always been an inalienable part of Russia,” he said.

Of those who cast a ballot, 96.7% voted in favor of Crimea leaving Ukraine and joining Russia. But the ballot questions offered no real option for any residents who wanted to remain part of Ukraine.

Putin said that Russia had to act because Ukraine’s new government, backed by the United States and European powers, were prepared “to seize the state through terror and murders.”

But Yatsenyuk called it “a robbery on an international scale,” one that Kiev will never accept.

Members of the Russian parliament and the new Crimean legislature met Wednesday morning in Moscow to discuss the details of how the region will join Russia.

Crimean lawmakers have said they now see Ukrainian soldiers as an occupying force and have given them a certain amount of time to leave the peninsula.

The Ukrainian troops have been encircled by pro-Russian forces in their bases for days.

They have also come under pressure from pro-Russian crowds who gather outside and call on those still loyal to Kiev to surrender or defect to Russia’s military. CNN teams on the ground have seen Russian forces also show up to reinforce that message.

Putin has denied that Russia’s armed forces have been used in Crimea, despite what has been stated by international observers and the government of Kiev. The pro-Russian forces seen in Crimea are Crimean “self-defense” forces, he said.

Putin said the 22,000 Russian troops in Crimea did not enter during the current crisis, but “were already there,” in accordance with previous international negotiations.

Russian forces were allowed in Crimea under a treaty that allowed the Black Sea fleet to be based in the port of Sevastopol, but their movements within Crimea are supposed to be agreed upon with Kiev.

U.S. and EU officials imposed sanctions on more than two dozen Russian and Crimean officials Monday and urged Russia to avoid escalating the crisis, but Moscow has ignored those calls.

Tuesday’s annexation brought a new round of condemnation from the West, with British Prime Minister David Cameron saying it sends “a chilling message across the continent of Europe.”

Putin may be under international pressure over Russia’s actions in Crimea but public opinion is firmly behind him at home.

Cheering crowds celebrated the announcement that Crimea was part of Russia at some 80 rallies across Russia on Tuesday, from Vladivostok to Moscow’s Red Square.

“‘I love Putin a lot. I love Russia. We need to be together. We’re for peace, we’re for Putin, we’re for Crimea and we’re for Sevastopol,” said one woman in Moscow.