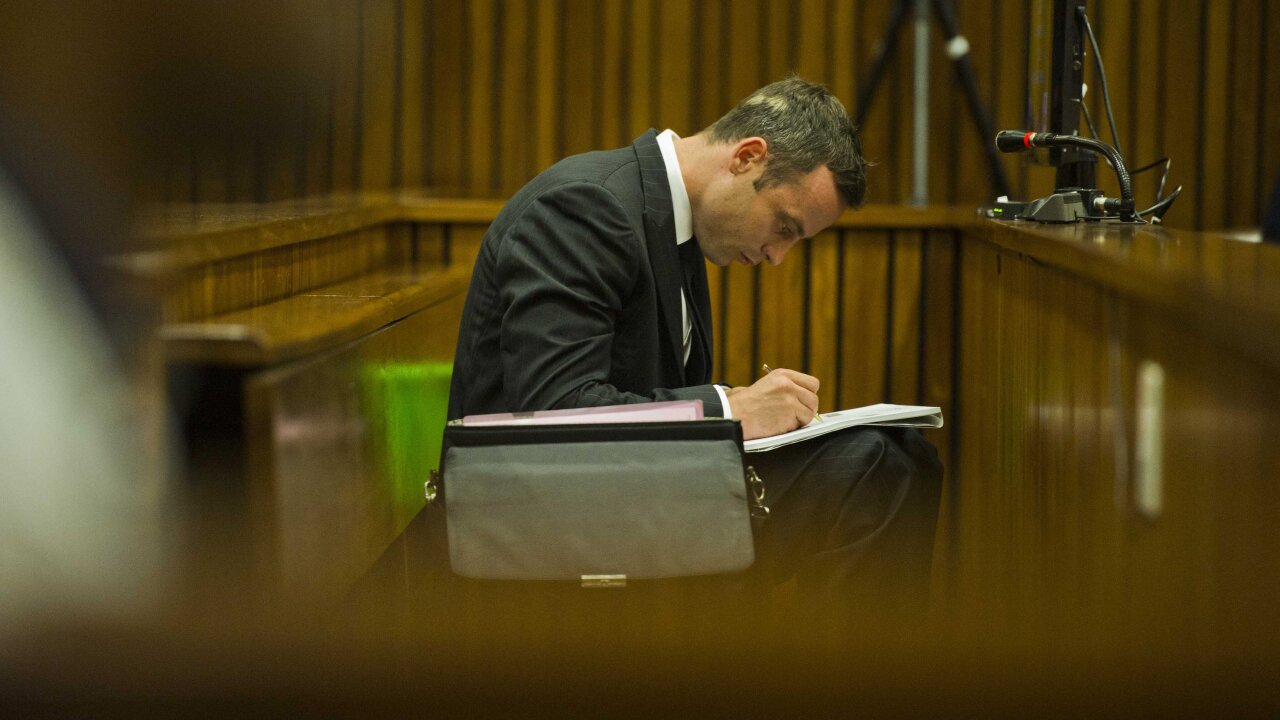 Oscar Pistorius sits in the dock during his murder trial at the North Gauteng High Court in Pretoria, Thursday, 13 March 2014.

PRETORIA, South Africa (CNN) — The police investigation into the killing of Reeva Steenkamp by Oscar Pistorius sounded like a catalog of bumbling, bad judgment, poor memory and petty theft in court on Friday, and it was the commanding officer on the scene the night of the killing who was testifying.

Former police Col. G.S. van Rensburg was on the stand all day, first for the prosecution and then being cross-examined by the defense.

He described finding a police ballistics expert handling Pistorius’ gun without wearing gloves and reprimanding the officer, who apologized and put on gloves.

And he said he was “furious” when at least one of the Olympic athlete’s valuable wristwatches disappeared from his bedroom as police investigated the crime scene.

He “body searched” his fellow officers, their bags and their vehicles but was unable to find the watch, which was worth several thousand dollars.

He also said he had ordered the bathroom door through which Pistorius shot Steenkamp removed from the house, placed in a body bag and taken to his office, explaining, “The door is the most valuable evidence because the deceased was behind the door.”

Earlier in the week, the defense attacked police handling of the door, implying that the evidence was unreliable because it was contaminated.

Van Rensburg resigned from the force in December after three decades, under fire for his handling of the door. Asked what he now did for a living, he choked up and said, “I am now coaching sports, and sports is my life.”

He’s the 13th witness to testify for the prosecution in the murder trial of Pistorius, once South Africa’s golden boy for the stellar track success that made him the first double amputee runner to compete in the Olympics.

The sprinter admits that he killed Steenkamp, his girlfriend of about four months, on Valentine’s Day 2013 but says it was a terrible accident, not premeditated murder.

He shot her through the locked bathroom door in his house, saying he thought she was an intruder, and then broke the door down with a cricket bat to get to her when he realized his mistake. She was 29.

Pistorius, 27, is pleading not guilty to murder and three other weapons charges.

On Friday, his lawyer Barry Roux ripped into van Rensburg’s chronology of events on the night of the killing, presenting witness statements from three police officers whose accounts differed from van Rensburg’s.

The former officer was so startled by the statement of police Sgt. Ntome Sebetha that he stared at Roux and said, “Amazing.”

Later, Roux rattled van Rensburg so severely, pointing out clear differences between two pictures that the former officer said were the same, that van Rensburg refused to answer a question about how many keys were in another photograph.

“It’s not a trick question,” Roux said. “There’s one key there.”

The former police colonel first took the stand Thursday and said paramedics were there when he arrived at Pistorius’ address about 3:55 a.m., but Steenkamp was dead.

As he testified, the prosecution showed more than 100 police photographs taken at Pistorius’ house after the killing, including the sprinter’s 9 mm handgun, still cocked and ready to fire, on a bloody towel or bathmat on a blood-spattered floor.

Both prosecution and defense accidentally displayed photos of Steenkamp’s dead body and mortal wounds Thursday, prompting the man who killed her to be violently sick.

Pistorius threw up after both defense and prosecution lawyers scrolled through evidence photos on monitors to find the ones they wanted to discuss, flashing past the gruesome images as they did so.

There’s a monitor directly in front of Pistorius as he sits in the stand, on trial for murder.

On Friday, the court was shown a photo of a toilet covered in blood, but only van Rensburg saw photos of Steenkamp’s body and closeups of her injuries.

Those gruesome pictures were not displayed on courtroom monitors.

Even so, Pistorius kept his head down, shielding his eyes with one hand, while prosecutor Gerrie Nel talked the former police officer quickly through the sheaf of photos on the witness stand.

On Thursday, the prosecution talked van Rensburg through police photographs of the athlete’s house taken on that night. They showed some small spots of blood on chairs in the downstairs sitting room and a trail of blood that led upstairs.

Pistorius appeared calm and took notes as the police photographs of the gun were shown. A black cell phone lay on the floor next to it.

Another image showed a bloodstained towel in the bathroom, as well as a cricket bat and bullet cartridge on the bathroom floor, next to large bloodstains.

The photos also indicated that Pistorius kept an air rifle and baseball bat by the bedroom door.

Other police photos included one of a magazine with bullets and pouch taken from the right-hand bedside drawer and a closeup of the magazine with a hollow-point bullet, the kind that killed Steenkamp.

Some of the photographs appeared consistent with Pistorius’ version of events that night.

One showed a fan by the right-hand side of the bed, which may gel with Pistorius’ account that he went out to get the fan from the balcony before hearing noises he thought were made by an intruder.

The case against Pistorius is largely circumstantial, Nel said in his opening statement last week. Pistorius and Steenkamp were the only people in his house when he killed her.

Nel has been building a picture of what happened through the testimony of experts, neighbors who heard screaming and bangs that night, current and former friends of Pistorius’ and a security guard who sped to the scene because of reports of gunshots.

Many prosecution witnesses’ accounts are consistent with Pistorius’ version of events: that he got up in the night, went out to his balcony to get a fan, came back inside and heard noises in the bathroom that he thought came from an intruder.

He said he took the gun and fired while calling for Steenkamp to call police. When she didn’t answer, he realized it could have been her in the bathroom, he said.

If he isn’t convicted of premeditated murder, the sprinter could face a lesser charge of culpable homicide, a crime based on negligence. The sentence for culpable homicide is at the judge’s discretion. The trial is expected to take at least another week.